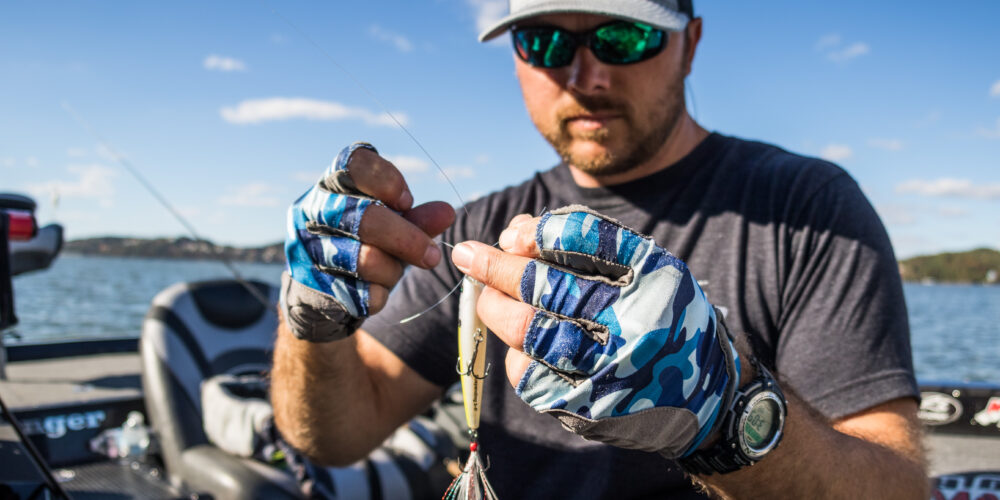 Jimmy Washam is more than accomplished with a jerkbait, and it’s one of his staples on deck on the Tackle Warehouse Pro Circuit. From Florida to Lake Erie, Washam has cashed checks on a jerkbait and learned a lot about how best to apply it in recent years. Here are a few tricks he uses to put more bass in the boat.

Going to slightly larger hooks is a common practice in smallmouth country, and Washam likes to do it in Florida as well. However, a lot depends on the individual jerkbait.

“In Florida, I will try to upsize the hooks on jerkbaits, because sometimes you catch really big fish and need to lean into them,” he says. “Some jerkbaits, you can’t play with the hooks. The Megabass line, if you go playing too much with the hooks, you can really get it out of sync. The little Bray Z, you can go with a little heavier rear hook.  The Strike King baits, you can play with those and get good action out of them with a heavier hook.”

To get a bait deeper, Washam will sometimes go with bigger hooks, but he generally prefers to use lead wire or something like SuspenStrips when his main goal is to add weight.

Tip #2: Feathered Trebles Have a Place

Most high-end jerkbaits come standard without feathered trebles these days, but there are some times when Washam likes to go against the grain.

“I don’t throw a feathered treble much because it gives drag in the back and takes away from the dart and erratic action,” says Washam. “When you see those little 1-inch shad fleeing out of the water, that’s when I’ll throw a feather on there. The Azuma Bray Z is a good size, you can still get a lot of back and forth erratic action with the feathers and it casts well.”

Generally, Washam only adds feathers when the fish are feeding on small shad in the fall, and then he uses white feathers with maybe a bit of red for the most part. But, if he’s around smallmouth or fish that are feeding on bream, he sometimes likes to go with chartreuse feathers.

For his basic jerkbait tackle, Washam goes with a high-speed, 8.3:1 gear ratio reel, a 6-foot, 9-inch, medium-power Hammer Rod and fluorocarbon. However, this year he learned that using a longer rod can sometimes be a player.

“At Lake Murray this year, I had a ton of bites on Day 1,” says Washam. “But because they’re herring eaters, they’re crazy fish. They would hit the bait so fast, they would dart at it and come up behind it and pull off it. It was high-speed, stressful jerkbait fishing.”

“On Day 2, I went to a 7-foot rod, because I could get more give out of that longer rod,” he says. “The 7-foot made a tremendous difference when I would get those fish close to the boat. I should have done it on Day 1, but I’ve learned if I’m around smallmouth, spots or herring bass, I want to throw a 7-foot. You get a lot better fish playing capabilities out of the longer rod.”

Still, Washam isn’t about to switch to longer rods exclusively, preferring the 6-9 model because of how he can work the bait.

“What you get with a longer rod, is it takes less effort to make the bait pop,” explains Washam.  “But, it’s a totally different action with a longer rod. I can put more slack in the line with a 6-9 and pop it differently.”