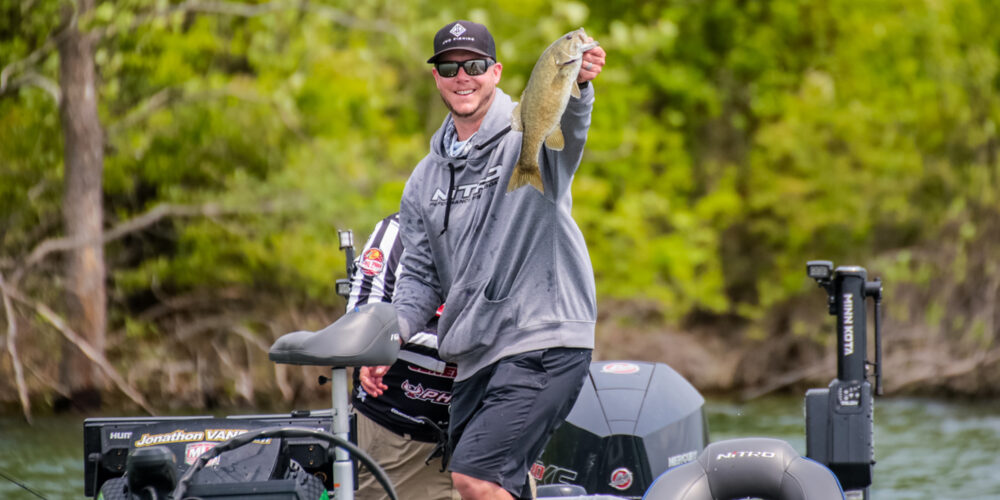 Smallmouth bass are loved (and feared) by many anglers. Loved because of their feisty fight and visual beauty, feared because those who don’t regularly fish for them are often confused about how to find and catch them.

MLF pro Jonathon VanDam falls into the “loves smallies” category. He’s from Michigan and grew up fishing for smallmouth bass. No fear, just admiration for the aggressive smallie and a love for chasing them, especially during spring.

“I know a lot of anglers find smallmouth bass frustrating,” VanDam admitted. “They aren’t like largemouth bass. They move around a lot. Smallies can be on a piece of structure one day, and the conditions can be the same the next day, and they’re gone. They also don’t relate to cover like largemouth bass do. They tend to be around cover and not buried in or under it.

“Once you get in tune with how they can roam and relate to cover, you can start catching a lot of them. I wouldn’t say they’re difficult to catch, just difficult for those who don’t have experience fishing for them. They do move a lot, but once you find them well, they’re sight feeders, and if you put something in front of them, they usually let you know they are there.”

Springtime is primetime for catching smallmouth, and VanDam has a pretty simple approach to finding them.

“Depending on the fishery, location can be a bit different, but in general, I’d locate primary breaks where deeper water comes up to the edge of a shallower flat,” VanDam said. “This can be along a point, or near a cove, or really anything related to spawning flats. The smallies can be anywhere in that area depending on the stage of spawn they are in. You can fish along the breaks or up on the flats, the key is getting them to show themselves.”

How to get the smallies to show themselves is pretty basic for VanDam.

“I tend to stick with three lures in the spring when I’m searching for smallmouth bass,” VanDam said. “My first choice is almost always a jerkbait, then a tube fished with a jig, followed by a swimbait. It’s basic stuff, but it works.”

The jerkbait is the first choice due to its ability to cover water quickly and efficiently. Also, it’s one of the best lures for coaxing smallmouth into giving away their position.

“A jerkbait is the best for finding active smallmouth bass in the spring,” VanDam advised. “Most of the water fished further north in smallie country is clearer, so you’ll often see the bass chasing your jerkbait, even if they don’t hit it. They are notorious for giving away their location. If you can get one to hit, often it will trigger aggressive competition for the food and you can catch a lot of them quickly.”

VanDam suggests using a standard twitching retrieve, and, of course, mixing it up until the bass let you know what they want.

Stick with natural colors such as shad, ghost minnow, ayu, and natural perch for brighter days. If it’s cloudy, try brighter versions, such as Table Rock shad or sexy blue.

Tubes are next on the VanDam menu, and he’s going old school.

“The good old-school 3.5-inch tube with a jig stuffed inside catches a lot of smallmouth bass,” VanDam advised. “I like a heavier 3/8-ounce jig and fish it on straight 10-pound fluorocarbon, no braid. I’m usually fishing this deeper, that’s why I use the heavier weight. When the jerkbait just can’t seem to get them, the tube will. I really hop it a lot. It’s great when the conditions are calmer and for catching bass that are just following your jerkbait.

“It’s a pretty easy and basic lure. I think a lot of people have forgotten about how productive it is for catching bass.”

Natural hues such as various green pumpkins, goby, or crawdad are what VanDam suggests for tube colors.

Swimbait options can vary from smaller 3.25-inch Strike King Rage Swimmers up to the Strike King Squadron. VanDam likes the more subtle approach the swimbait gives when the smallies want a horizontal technique, but aren’t chomping on the jerkbait.

“The swimbait is a natural and more subtle lure choice and technique than a jerkbait,” VanDam said. “I’d say 90 percent of my biggest smallies have been caught on swimbait or jerkbait. My favorite swimbait colors are ayu, sexy shad, ghost minnow or KVD magic.”

Sleep in for Smallies

One more tip for you springtime smallie hunters: sleep in a little.

“The smallies are usually not firing right in the morning,” VanDam said. “Now, I’m not saying you need to sleep in until the afternoon in smallie country, just don’t expect them to be firing early in the morning. Start deeper in the morning and work your way up onto the edge and as the sun gets out and a little wind appears, move onto the flats. They’ll let you know if they are going to be cooperative.”