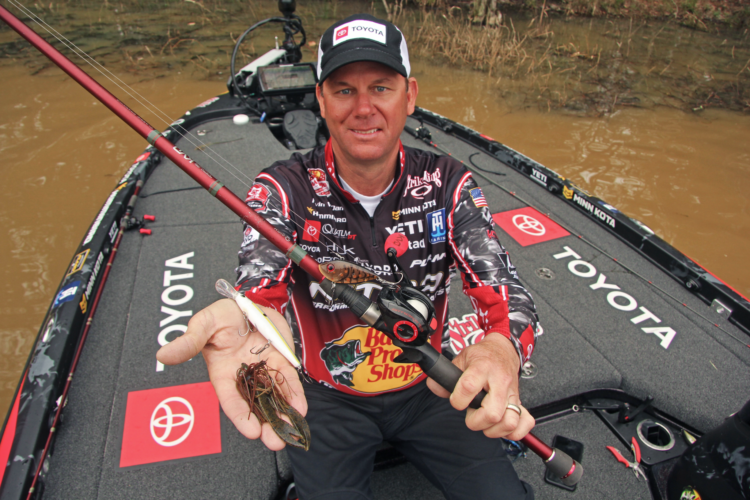 If you live in Texas, Florida, Southern California, Arizona or Cancun you may decide to scroll ahead.

But if you live within 300 miles of Charlotte, St. Louis, Nashville, Syracuse, Minneapolis, Tulsa, Indianapolis, or anywhere else where snow flurries still threaten to fly, Kevin VanDam – the “Kalamazoo Kid” – has chosen three lures you might want to make sure you have ready for your first big bass-fishing trip of the new season.

“The first fishing trip of the year for most people involves water temps in the 40s or really low 50s,” VanDam says. “So the lures I’m choosing here are among my three favorites to cover a variety of conditions when the water is still really cold.”

“It’s hard to beat a lipless crankbait in some shade of red or crawfish in late winter or early spring,” the Team Toyota anglers asserts. “It really shines well if there’s aquatic vegetation – but that’s not critical. It wasn’t critical when I won the 2010 Classic on Lay Lake with a Red Eye Shad, and there was actually still a thin layer of ice on some of the backwaters when we started that week in Alabama.

“The key is to fish it near the bottom at this time of year by dragging or short hopping it, rather than burning it higher in the water column, like you would in much warmer water. That’s why I like to use a slightly slower Quantum Smoke 6.1:1 reel when fishing a lipless bait in cold water – that slower gear ratio reel forces me to slow down my retrieve.”

“Anybody who’s followed my career probably knows I love to fish a Most pros, including myself, never leave home without a Plano box full of at this time of year – especially if the water is clear, or mostly clear.

“This is not a lure you want to throw in muddy water like you see in the photo. But in cold clear water, it’s probably the very best lure you can tie on. The series of jerks – and then long pauses of the rod tip – before jerking again, are not only visible in clear water, but also give cold lethargic fish time to react, ” he says.

“If the water is muddy like you see it behind me – you’ll need a fairly bulky jig to slowly probe every piece of shallow cover you can find, but this jig is also super versatile, so if you have clearer water you may want to drag it slowly across a rocky bottom on a primary or secondary point,” VanDams points out. “Versatility is the reason I choose this jig one of my three lures to begin your fishing this year.”

And as you might have guessed, during this time of year, as blankets of white snow finally give way to yellow daffodils and pink dogwood blooms, VanDam chooses green pumpkin colored jigs for clear water and black/blue if the water is muddy.