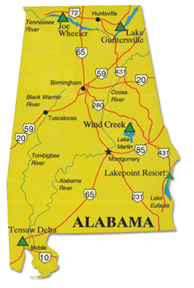 Alabama is cashing in on the growing popularity of bass fishing and the economic impact that goes with it.

Many states have developed trails where visitors can play golf or see wildflowers, birds or historical places as they travel through the state, but only one state has a trail dedicated to bass fishing.

The Alabama Bass Trail, developed by the state’s Department of Conservation and Natural Resources and introduced in the fall of 2000, is the first of its kind in the nation and is already the envy of other states.

“Our bass trail is a model for other states to follow,” said Riley Boykin Smith, commissioner of the Department of Conservation and Natural Resources. “We are already getting calls from other state conservation departments that want to create their own bass trail.”

When he announced the creation of the trail Oct. 21, 2000, Gov. Don Siegelman said that bass fishing tournaments pump millions of dollars into Alabama’s economy each year. Since the state has some of the most beautiful waters and natural wonders in the nation, he explained, the Alabama Bass Trail would provide yet another opportunity to showcase to the world what the state has to offer. He emphasized that the Alabama Bass Trail would be the most practical way to enhance the economic impact of bass fishing and to draw national attention to the state while also providing for improvements to facilities and fisheries.

“The economic impact along with the resulting publicity from television and print media exposure will be felt by host communities not only immediately but also over an extended time period,” Smith said, emphasizing that the Alabama Bass Trail is about partnerships between state, city and county officials as well as local chambers and tourism bureaus. “It’s a win-win effort that will generate tourism revenues and improve fishing facilities for all anglers as well as enhance the renewable fishing resources in our great state.”

The Alabama Bass Trail is comprised of five sites where the state supports local efforts to attract major bass tournaments. Part of this effort includes building new facilities or improving existing facilities to benefit both tournament and recreational anglers.

Mobil-Tensaw Delta
The Mobile-Tensaw Delta, a 100,000-acre fishery formed by the convergence of the Tombigbee, Alabama and Mobile Rivers at Mobile Bay, is the southernmost site on the Alabama Bass Trail. With two new launch ramps and premier facilities at nearby Battleship Memorial Park and the Mobile Convention Center, this location just might be a tournament angler’s paradise. As a testament to its appeal consider that it has already hooked the biggest fish in the world of bass tournaments.

“The Mobile-Tensaw Delta will offer many challenges for participants in the Millennium tournament,” Smith said. “This is a great opportunity to showcase this wonderful fishery and the facilities that Mobile has to offer. It is a credit to the Alabama Bass Trail that Mobile was selected to host the Millennium.”

Wheeler and Wilson Reservoirs
Wheeler and Wilson Reservoirs on the Tennessee River in northwest Alabama are known for producing plenty of big smallmouth and largemouth bass. These lakes, which are connected by a lock and dam, combine to provide 82,600 acres of fishable habitat. Joe Wheeler State Park and its tournament friendly facilities serve as the official host for this stop along the trail. The park offers a lodge, convention center, restaurant, full-service marina, cabins and campgrounds.

Lake Guntersville
Lake Guntersville, a 67,900-acre impoundment in northeast Alabama, also produces numerous big largemouth and smallmouth bass. Lake Guntersville State Park, with its majestic view of the lake and a variety of accommodations including mountaintop family chalets and lakeside cottages, is the host site for this lake. The park also offers multiple boat launch ramps, convention meeting rooms and a full-service restaurant.

Lake Martin
The clear water of Lake Martin near Alexander City, Ala., is home to an excellent population of spotted bass. The 41,000-acre lake is also home to plenty of big largemouth. Wind Creek State Park, a well-seasoned tournament host, is the official bass trail stop at this location. Earlier this year the park hosted the third stop on the $4.45 million 2001 Wal-Mart FLW Tour-the richest tournament series in history.

Lake Eufaula
Lake Eufaula, a 45,200-acre reservoir on the Alabama/Georgia border, is often referred to as the “Bass Capital of the World.” Lakepoint Resort State Park, with its waterfront lodge, restaurant, convention center, full-service marina, campground and vacation cottages, is the host facility on this legendary bass lake.

The Alabama Bass Trail is a superb collection of bass fishing destinations for recreational and tournament anglers alike. The boat ramps, docks and infrastructure necessary to attract and support large tournaments are already in place, and family friendly communities make each stop an excellent vacation destination.

The formation of the Alabama Bass Trail comes at an excellent time. According to the National Sporting Goods Association, of the 10 most popular sports and recreation activities, outdoor categories-camping and fishing-showed the strongest growth from 1998 to 1999. Camping rose 7.8 percent and fishing rose 7.1 percent. With the number of U.S. anglers ages 7 and older now hovering at 46.7 million, the Alabama Bass Trail should pay dividends for years to come.