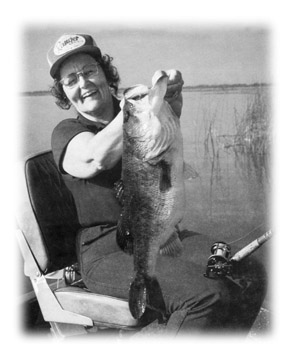 While most think of Forrest Wood when they think of Ranger Boats, it was Nina Wood who provided the rock-solid foundation for the enduring Ranger legacy.

When Forrest Wood describes Nina Wood, he doesn’t use adjectives. He tells a story. Like the story about Nina Wood working cattle on the family ranch near Flippin, Ark. Although Forrest and Nina have retired from Ranger Boats, the two work every day taking care of a 7,000-acre cattle ranch.

The day’s work may require a long list of things from cutting and baling hay during the summer, rounding up cattle for market in the fall, feeding during the winter and such menial tasks as separating bulls from cows.

The later is normally simple work, unless you cross a bull that doesn’t want to cooperate.
That was the case in this story when Nina and a farm hand were separating a cow from a bull.

“The bull, I guess, wasn’t ready to do without his cow,” Forrest said, in his trademark down-home style. “He got kind of cantankerous about it too.”

The 2,000-pound bull lowered its head, charged the farm hand and pinned him against the gate crushing his body. Right before passing out, the farm hand cried out. And the only help available was Nina, standing about 5 feet, 2 inches and weighing in around 125 pounds.

On the surface, Nina was no match for the bull. But her determination more than matched the bull’s rage.

“She jumped on the gate and started kicking the bull in the head,” Forrest said. “It was enough to get the bull to back down.”

The farm hand was saved, suffering bruises and broken ribs. But in Forrest’s mind, the anecdote more than describes Nina.

“That’s what kind of lady she is,” he said. “She does whatever it takes to get the job done.”

Whether taking the figurative or literal bull by the horns, Nina’s determination to get the job done figures greatly in how the average angler spends their day fishing.

There’s no denying the impact Forrest and Ranger Boats have had on the fishing world. Books, articles, television shows and even the Wal-Mart FLW Tour constantly remind us of that impact. Nina Wood, though, is an unsung hero in those changes.

“There is no doubt that Nina is the biggest reason why Ranger Boats and, for that matter, everything we’ve ever tried has been successful,” Forrest said. “She’s the backbone of the operation.”

The well-used phrase, “Behind every good man is a great woman,” applies aptly to the Woods and what has become known as the Ranger Family.

Nina is the matriarch. Her story and life exemplify the virtues that built Ranger Boats and what that name stands for.

She was born Nina Kirkland in the flood plain of the White River, near where the Bull Shoals Dam sits. It’s rough and rugged Ozark hill country, a hard place to live more than a half century ago and a tougher place to make a living.

At an early age, the seeds were laid for getting the job done, if for no other reason than to survive. She was the second of eight children, a position that gave her added responsibility in the family.

“We had to do everything to help make a living,” she said. “As soon as I was big enough, which wasn’t very big, I helped Dad dig mussels out of the White River.”

It was just part of the daily activities. Much of her life reads like a backdrop for a John Steinbeck novel. Each morning she milked cows before heading out to school. On real cold mornings, her mother would wrap her shoes in pages from the Sears catalog to help keep her feet warm.

By the time she was 10, Nina was accomplished at working with a team of mules. She also helped her father cut crossties, skid logs and haul ore from zinc and lead mines in the area.

“I wouldn’t take anything in the world for the way I was raised,” Nina said. “It was hard, but I didn’t know any difference.”

Years before the Bull Shoals dam was built, Nina’s grandfather was hired to read a river gauge near their farm. The gauge would later be used to measure flood plains for the dam. But her grandfather was thrown from his horse and unable to complete the task.

At the age of 12, Nina took over the responsibility, riding her horse to the gauge sometimes once a day, other times, depending on river flows, every two hours. Those trips often doubled as fishing trips to catch bluegill or catfish, or a squirrel hunt.

“I would always come home with a stringer of fish or a mess of squirrels,” Wood said.

Being so close to nature gave Wood an early appreciation of the outdoors and built her love for hunting and fishing.

“All we had to eat was what we raised,” she said.

Or caught or hunted. The family kept trotlines strung across the White River to catch catfish. In the White River bottoms, fish were plentiful along with small game like squirrels. And every chance Wood or her family had, they took advantage of it.

That was part of Nina’s earliest recognition of Forrest Wood, or at least his father, Irvin. Irvin Wood was the Game Warden in the area, someone who fostered fear in the young girl.

“I thought he was the boogey man,” Nina said. “That was why I was surprised when I was attracted to Forrest.”

The two met when they were in eighth grade. They were voted king and queen of their ninth-grade class and two years later began dating. After high school, they married on a day when work was shut down on the building of the Bull Shoals Dam.

Forrest Wood was part of the crew that built the dam. On his wedding day, he went to work but rain shut everything down.

“He came by the house and said `Why don’t we get married today?”’ Nina said.

It would be easy to say that the relationship flourished from that point. On a personal level, it certainly did. But nothing ever came easy for the Woods.

A bankrupt cattle business forced them to move out of state, where Forrest raised money to repay the debt. A few years later, they moved back to Flippin, where once again the duo lived by taking advantage of every opportunity. They built houses and ran a float trip business on the White River guiding for trout, which led to the formation of Ranger Boats.

Along the way, Nina was as much a part of the growth and running of the business as her husband.

“I used to joke with my clients that Nina didn’t have anything in the world to do from midnight to 4 a.m. but sleep,” Forrest said.

When she wasn’t sleeping, Nina was running the business side of the family’s work. She contracted labor for their house-building business, cooked lunch for clients, packed commissary boats and shuttled clients for the float-trip business.

In the boat business, her duties included being the bookkeeper.

“She was really good at squeezing a dollar,” Forrest said.

Nina also took care of other duties at the plant from ordering materials to dispatching trucks. One of Forrest’s stories involves a truck driver who insisted that he didn’t need to drive his truck one day because it would only run “wide open.”

Nina replied, “That’s just the way we want you to run, so get going.”

In the process she fostered the idea of the Ranger Family. The Wood’s daughters were employees of the company. As teenagers, they delivered boats as far away as Evansville, Ind.

She took the family concept one step further. When bass tournaments became a big part of the business and pro staffs were a major part of selling boats, Nina was in charge of whom they sponsored.

“She would spend time with the fishermen’s wives, getting to know who the fishermen really were,” Forrest said. “She knew it was more important what type of person was representing you than how many fish they could catch.”

Many long time professionals got their start thanks to Nina’s helping hand. The Ranger Family idea is still a part of the company today.

“I know Ranger Boats wouldn’t be what it is today without Nina,” Forrest said. “She just has a quality about her that doesn’t know when or how to quit.”

Which brings us to another story. When Forrest was competing on the B.A.S.S. tournament trail, Nina would often accompany him on pre-fishing trips.

On one trip to Lake Okeechobee, Forrest caught an 8-pound largemouth, and they placed the fish in the livewell to have it mounted. A few minutes later, they stopped to visit with Ron and Michelle Shearer.

“I was kicked back and relaxing and visiting,” Forrest said. “And I heard Nina say, `Get the net.’ I knew by the way she said it that I’d better because she was serious.”

At the end of the line was a gargantuan fish.

“It was so long, it wouldn’t fold and go into the net,” Forrest said.

The fish fell back out and immediately the reel fell off the rod handle. By the time she got the reel back on, the line had wrapped around her feet. Through it all, the fish stayed hooked until it ran the line by the motor’s prop and cut it.

“It was as big a fish as I’ve ever seen, maybe 14 or 15 pounds,” he said. “She didn’t talk to me for three days. But the reason she caught it was she never quit. She doesn’t know how.”