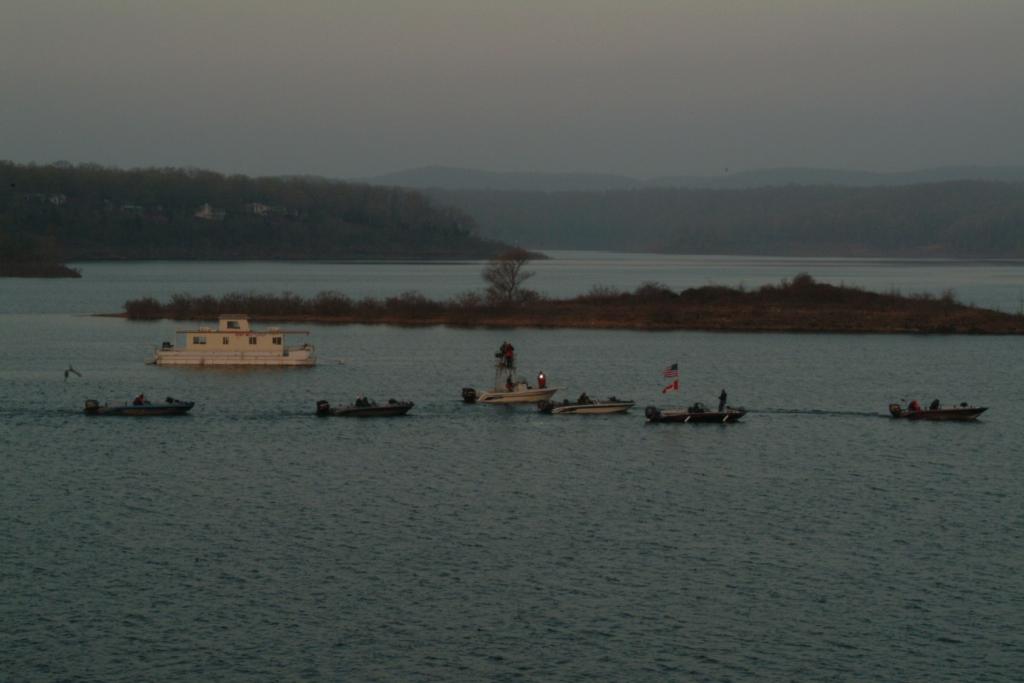 In contrast with day one, many anglers reported catching their day-two fish in the afternoon. Without cloud cover and with very little wind, sunlight will easily penetrate the clear waters of Bull Shoals Lake.

The leaderboard shuffled quite a bit on Thursday, with many of the day-one leaders struggling, while others pushed their way into contention. Only 29 walleyes were weighed in on day two, yet the sentiment among anglers is that the bite will worsen.

Todd Riley realizes the potential effect the bright sun will have on the bite.

“The clear skies will probably kill the midday bite.”

On the other hand, anglers who have struggled on the first two days can take consolation in knowing that one good day can catapult them into the top 10.

Pro angler Matt Froelach has yet to bring a fish to the scales, but doesn’t believe he is out of the race.

“One or two fish will for sure get you a check, and you might even make the cut,” said Froelach. “At a typical tournament, you’d be out of it for sure after two days of being skunked. But here, no one is out of it.”

“I’m guessing that what you have in your livewell by 9 or 10 a.m., you’re done for the day,” he said. “The predominant bite is coming from the shoreline points. I think it could actually get worse.”

Northfield, Minn., native Ross Grothe currently sits in 18th place on the pro side and feels fortunate to still have a chance to make the cutoff.

“It’s a nice feeling knowing that we’re not out of it,” Grothe said. “I don’t think the sunny skies are going to hurt us too bad. I think today will actually be better than yesterday because of the lack of thunder and lightning.”

Although Grothe likes the fact that he is still in contention, he knows Bull Shoals has the ability to produce more walleyes.

“I know the characteristics of this fishery, and it’s disappointing that we don’t get to see what this fishery really has to offer.”

Anglers begin the critical day-three weigh-in at 3 p.m. Central time, when the field begins returning to Bull Shoals Boat Dock on Route 178. First round weights will carry over to day four.