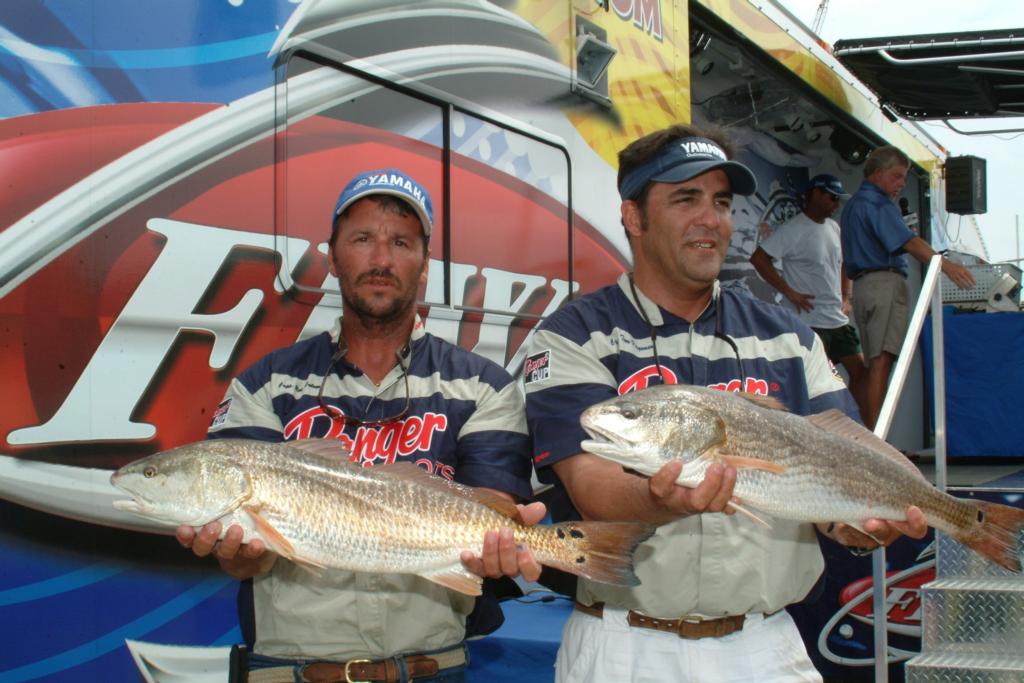 TITUSVILLE, Fla. – Some sight-casted singles while some snared schoolers Friday at the Wal-Mart FLW Redfish Series Eastern Division event. And by day’s end, both types of anglers filled the top five positions.

Tom Fragomeni of Deland, Fla., and Raymond Culver of Naples, Fla., were two anglers that opted to go with the sight-fishing singles strategy – stalking solitary reds in the shallows – and they lead the event with two redfish weighing 14 pounds, 11 ounces.

“We knew we had to catch them early,” Culver said. “Once it gets past about 11 o’ clock, it’s history – it gets too hot. The water temperature in our spot is 93 degrees. Once it gets into the afternoon, the fish hole up and apparently lose their appetite, because they won’t eat.”

The team reported catching four or five keeper in 2 to 3 feet of water.

Walker and Simms go to school

David Walker of Sevierville, Tenn., is better known for his bass-fishing exploits on the Wal-Mart FLW Tour, but he

and father-in-law Jeff Simms of Punta Gorda, Fla., put a schooling on the redfish today and ended up with two reds weighing 14 pounds, 9 ounces for second place.

Actually, the school found them.

“We were working a few singles when we ran into a whole school of reds – or, rather, they ran into us,” Walker said. “We probably caught 20 redfish in the 5- to 6-pound range. It was unreal. Several times Jeff and I had on doubles.”

“The fish were wadded up in this one area about 50 yards wide and about 2 1/2-feet deep,” Simms said. “Just about every time we cast in there, one of us would hook up. It was a great day.”

Girle and Harris knocking on the door

Warren Girle of Longboat Key, Fla., and Billy Harris of Bradenton, Fla., are fishing both singles and schoolers and are tied for third with two redfish weighing 14 pounds, 8 ounces.

The team caught a total of five keepers on Mister Twister RT Slugs, allowing them to cull up several times.

“We are doing a little bit of both,” Girle said. “We are working a school early and then picking on singles later in the day.”

Girle and Harris finished second at Sarasota, Fla., earlier this year and will be looking for redemption tomorrow.

Barlow and Hester tied for third

Barlow and Hester are fishing a large school of redfish reported to be “300 fish strong.”

But they are not the only team fishing the school. Some 10 to 15 boats are also working the huge group of fish.

“We probably caught 20 reds today,” Hester said. “Everybody else around us is catching them, too. Everyone has been very courteous and has exhibited exceptional sportsmanship, given the crowded situation. There has not been a single negative word spoken between competitors.”

“I thought all the pressure would really hurt these fish, but it hasn’t,” Barlow noted. “They are chomping, and nothing seems to stop them.”

Matthew Morel and Peter Young, both of New Orleans, are in fifth with two redfish weighing 14 pounds, 4 ounces.

The Louisiana redfish team is also fishing a large school of reds, presumably the same one Barlow and Hester spoke of.

“We caught between 25 and 30 keepers today,” Young said. “There are a lot of boats working the school, but everyone got along great out there today. I was really impressed with the professionalism, considering the number of boats working these fish.”

Rounding out the top 10 teams in the FLW Redfish Series Eastern:

Day two of the Redfish Series Eastern out of Titusville begins at 7 a.m. Satruday at Sand Point Park.