Cochran wins: A look back at the Forrest L. Wood Championship 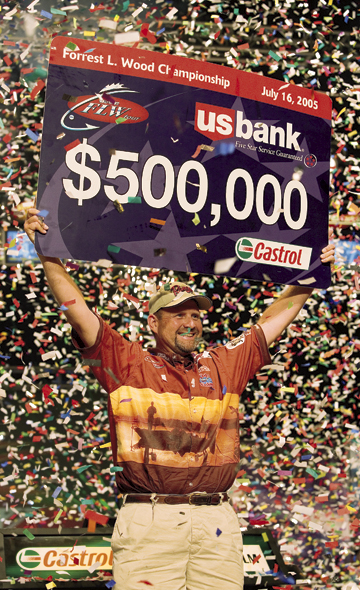 From the moment the Wal-Mart FLW Tour Forrest L. Wood Championship field gelled just after the last regular-season event on the Potomac River in June, Arkansas-based pros who secured a slot in the championship became hot topics in the world of tournament bass fishing.

Since the tournament, presented by Castrol, was being held at the height of summer when fishing is tough and recreational boat traffic is heavy, fans and pundits of bass fishing automatically assumed that locals would have a clear advantage, especially ones who knew the whereabouts of deepwater brush piles.

For the most part, the predictions were right. George Cochran, who has lived on Lake Hamilton for 15 years, won the tournament and collected the $500,000 winner’s check. And brush piles did play a role in his victory, but in a much different way than most might have expected.

Cochran began concocting his winning game plan the minute he left the Potomac River. As he drove home, he mulled over his Lake Hamilton experience, and two things became clear.

First, he figured the championship would be won in the early morning hours.

“Given the Saturday boat traffic in the peak of summer, I knew the winning window would be the first two hours of the final morning,” he said. “After about 10 a.m. on Saturday, the lake is impossible to fish.”

Secondly, from his past Hamilton experience, Cochran knew having fresh water to fish on the final day would be an “ace in the hole.” 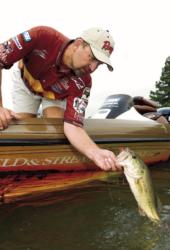 “It’s virtually impossible to duplicate solid stringers off the same water two days in row on Hamilton in the summer,” Cochran said. “I knew of one place where I could probably catch 10 to 12 pounds for only one day of the event, so the whole key for me was to never lay a lure in that stretch unless I made it to the final day. The critical mistake I wanted to avoid was burning up my best water to get to the finals; I’d rather not even fish the final day if I had to burn my ace in the hole to get there.”

The real genius in Cochran’s plan, however, was protecting his best water from other anglers. In an almost ironic twist of strategy, Cochran essentially used boat traffic to ward off fishing pressure.

“Anglers avoid boat traffic like the plague out here,” he said. “Basically, boat traffic forces all the anglers into the same tiny, no-wake-type areas all summer. So I did the opposite. I intentionally looked for fish in the worst boat traffic areas on the lake and that just happened to be right near my house.”

Cochran’s backyard is the portion of the lake near the Hwy. 70 bridge where the water constricts down into a narrow corridor.

“Since the lake narrows there, it creates the most awful boat congestion and wakes on the whole lake,” Cochran said. “It’s so bad on any given day in the summer that nobody fishes there. Everybody gravitates toward the back ends of creeks or no-wake areas, not the most exposed areas of the most traveled paths on the lake.”

Cochran’s favorite stretch of water – the one where he thought he could catch 10 to 12 pounds – just happened to lie within that boat-wake war zone near his home.

“I have a lot of confidence in that particular bank because I’ve caught some of my best summertime stringers there early in the morning,” he said. “I’ve night fished that stretch several times, and that’s when the fish bite – from midnight until about two hours after daylight – it’s the only chance they have to feed before the place turns into an untamed sea.”

With that, Cochran had the cornerstone of his plan in place. He would not touch his best confidence bank on Lake Hamilton until the morning of day four. That left only one problem: getting to the final day.

In order to get there, Cochran had to fish past Sandy Melvin of Boca Grande, Fla., and Brent Chapman of Lake Quivera, Kan., during the head-to-head rounds. That’s where the brush piles came into play – not fishing them, but talking them up as the key to winning on Hamilton.

“I’m a shallow-water fisherman,” Cochran said. “That’s where my strengths are. If I’m going to win, it’s going to be shallow. I wasn’t about to start playing the deep brush pile game, so the next best thing for me to do was to talk up brush piles like they were the winning ticket.

“I wasn’t trying to steer people in the wrong direction on purpose,” he added. “Brush piles truly are a major factor on Hamilton in the summer, but the more time the competition spent looking for them offshore, the less time they spent on the bank.”

Since Cochran was saving his ace in the hole for the final day, he had to get to day four the old-fashioned way – with a little luck and a lot of persistence. 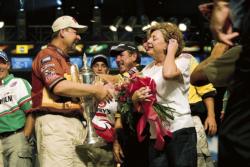 Cochran stuck to his basic plan of fishing the most exposed banks in the worst boat-traffic areas first thing in the mornings while staying away from his best bank.

Later in the afternoons, when boat traffic became an issue, Cochran even had to retreat back into smaller creeks and no-wake-zone areas to escape the boat wakes. Then he would put the topwater down and switch over to a 5-inch Strike King 3X worm rigged wacky style, tied to 10-pound-test P-Line.

“I was using the wacky worm around boat docks,” he said. “I was trying to key on the shallowest, shadiest parts of the docks.”

On day one, Cochran hardly looked like a threat. He weighed in three keepers for 3 pounds, 7 ounces to lead his first-round bracketed opponent, Sandy Melvin, by a mere ounce.

The next day, he turned up the heat and boated a limit weighing 6 pounds, 10 ounces to eliminate Melvin.

“I caught four of the five bass on the wacky worm that second day,” he noted.

On day three, Cochran had to face Brent Chapman.

Chapman was having a good tournament and had weighed in a total of 12 pounds, 4 ounces over the first two days, compared to Cochran’s two-day total of 10 pounds, 1 ounce.

The day-three match up between Cochran and Chapman was intense and Cochran found himself wanting to sample his best bank, but he resisted the temptation.

“I knew getting by Brent was going to be tough,” he said. “I don’t know how he was fishing, but he was bringing them in everyday. That had me worried, but like I said, I was prepared to get eliminated before I would use my best stretch in the bracket days. I had to just go out there and hope for the best.”

The “best” did happen, and Cochran shimmied by Chapman with a pound to spare.

Once in the top 12, Cochran pulled out his ace in the hole, and his plan came together like a royal flush.

On Saturday’s final round, he headed straight for his coveted stretch of water and put on a patented George Cochran shallow-water clinic.

Alternating between the Spit-N-King and the Chug Bug, he quickly put four keepers in the well. Then he pulled out a 1/4-ounce War Eagle buzzbait (red head/white skirt) and began casting it where few people would dare to fish.

“Along that particular stretch are several docks anchored with multiple cables fastened to the bank,” he explained. “I would throw my buzzbait back behind the docks and work it over those cables.

“My best fish – a 3-pounder – bit my buzzbait on one of those crazy casts,” he continued. “I had to drag that fish over several cables, and I could feel my line fraying each time that fish fought me over a cable. When I finally got it in the boat, I pulled on my line and it broke – that’s when chills went down my spine.”

By the time Lake Hamilton’s boat traffic began to rear its ugly head, Cochran already had $500,000 worth of bass swimming in his livewell. A little later, he even caught another 2 1/2-pound bass that culled him up. His final winning weight settled on 10 pounds, 1 ounce. 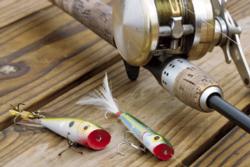 “Everything went exactly as planned,” Cochran said. “That’s a rare occurrence in this business, but it all came together at the right time.”

If there is one place you don’t want to finish in all of FLW Outdoors’ tournaments, it’s second at the Forrest L. Wood Championship, where the difference between first and second is $450,000.

Chad Grigsby had that dubious distinction at Lake Hamilton. The fact that George Cochran beat him by nearly 4 pounds, as opposed to 4 ounces, made it a little easier for Grigsby to swallow. But to come so far and come up short was still devastating.

“I’m the first loser,” Grigsby quipped. “I’m happy that I finished second, but I’m not satisfied.”

“That’s pretty much all I did for four days,” he said. “I put the trolling motor on 70 and chunked a buzzbait at anything and everything. I never covered the same water twice. Everyday I fished new stuff – seawalls, grass, docks – you never knew where a bite was going to come from. It was completely random; there was no pattern to it at all.”

Grigsby did catch an occasional schooling bass during the week, but said all of his better fish came on the buzzbait.

Murray posted one of the biggest limits of the tournament on day one. He caught the bulk of that string drop-shotting brush piles in 12 to 20 feet of water. 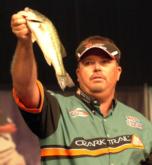 “After catching that good string on day one, I decided to completely leave those fish alone and try to survive the rest of the brackets fishing shallow with topwaters,” he said. “My main concern became conserving those quality fish for the last day.”

Indeed, Murray survived until the final round, but his drop-shot fish abandoned him and he finished the tournament with schoolers.

“I don’t know what happened to those deeper fish,” he said. “Earlier in the week, they seemed to be locked down in the brush much better. But later in the week, they started suspending in 5 to 10 feet of water over deep piles, feeding on schools of shad at the surface, and I couldn’t get the bigger fish to bite.”

Dean Rojas is quickly earning the moniker “Mr. Frog.” Last year, he almost pulled off a Bassmaster Classic win with a topwater frog, and this year, he came close to winning the Forrest L. Wood Championship on it.

Rojas fished a milk run of a dozen or so places each day with his lures, but the frog was the key bait for bigger fish.

“I fished key stretches of bank where deeper water ran up next to the bank,” he said. “The specific targets were laydowns and overhanging trees. But sometimes the fish would just smack that frog out in open water.”

Gagliardi posted his best stringer of the week on day one, which propelled him through the first bracket.

He caught those fish on the Spot Remover jighead and worm out of deep brush. But after that, his brush fish left him high and dry.

Gagliardi struggled the next two days.

“My deep brush fish burned me, and I started to get frustrated, trying to catch schoolers,” he said. “Catching schooling fish like that is one of my strong suits; they were busting all around me, and I couldn’t get them to bite. Mentally, that destroyed me.”

Gagliardi only caught two tiny keepers on day three, but he dodged elimination when his bracketed opponent, Zell Rowland of Montgomery, Texas, zeroed.

With a fresh start on day four, he recomposed himself with a good buzzbait fish early and started boating the schoolers that had eluded him all week.