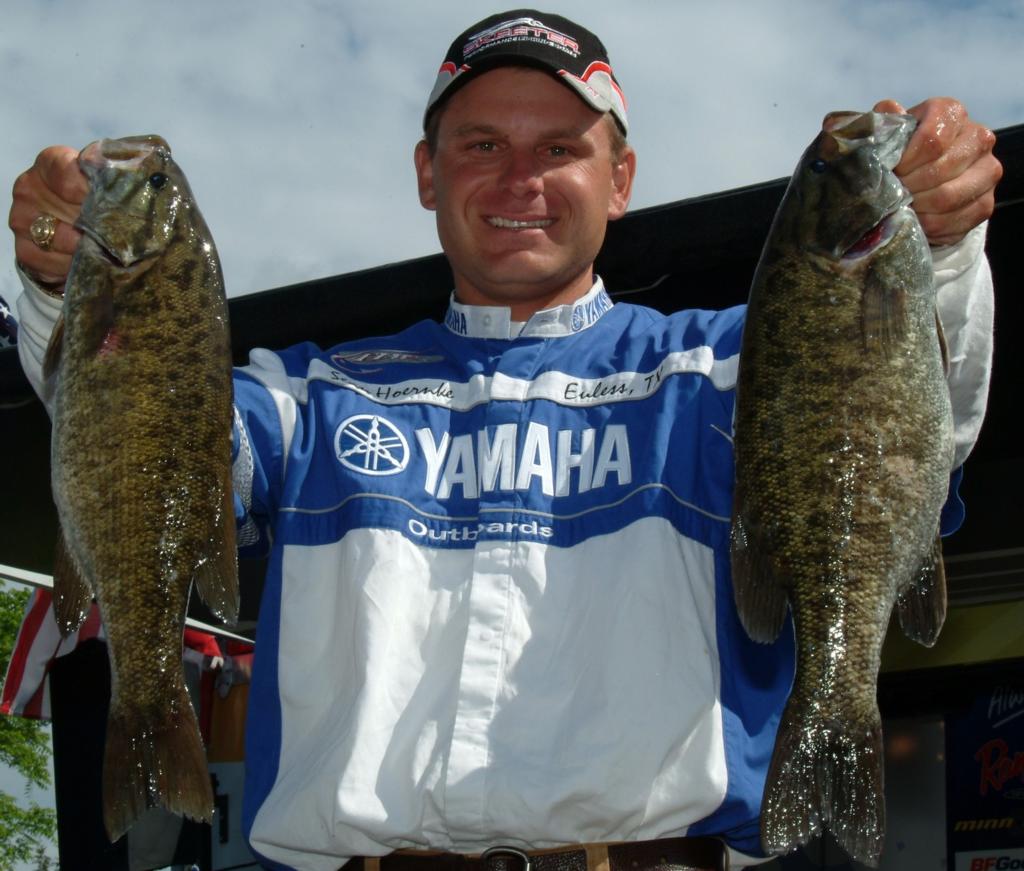 SOMERSET, Ky. – The FLW Series pros got the rain and clouds many had been wishing for today on Lake Cumberland, but the dreary weather did little to improve the overall catch or provide any tremendous stringers of smallmouth.

Sean Hoernke of Magnolia, Texas, has now taken the lead with a three-day total of 34 pounds, 12 ounces.

Just behind him by 4 ounces is yesterday’s leader Mike Hawkes of Sabinal, Texas, with 34 pounds, 8 ounces.

The interesting part of Hoernke and Hawkes being the front runners is that, unbeknownst to them, both have separately described nearly the exact same pattern.

Today, both anglers were a little more forthcoming with the details of the specific places they’ve had success this week.

Hoernke, who brought in 3 bass for 9-6, is focusing his efforts on short, stubby secondary points in pockets near the dam.

“I’m not fishing main creeks, but rather short pockets,” he described. “And I’m not really fishing the big obvious points as much as the small nubs – subtle rounded points that offer 10 or 12 feet of water before falling off into really deep water.”

Hoernke believes the better quality smallmouths and spotted bass are bedding in these areas.

“I’ve always found that in highland reservoirs like this, the biggest smallmouths and spots live down in the latter third of the lake, usually near the dam,” he explained. “Once I decided to focus on smallmouths for this event, I concentrated all my efforts in the lower end.”

Hoernke is fishing what he calls a “typical shaky-head finesse worm” but he is using 10-pound test as opposed to 6- or 8 pound test.

“I was losing too many big smallmouths on 8-pound test because I was afraid to really set the hook hard for fear of breaking the line,” he said. “So I went to 10-pound test and I can whack them good with a hookset and they don’t jump and come off.”

Similar to Hoernke, Hawkes is fishing areas he describes as, “any kind of slope

, slide or shelf with chunk rock.”

“Most of this lake is just pure vertical bank,” he added. “But there are tiny places where an underwater feature will stick out from the bank. They’re rare and I’ve only found five or six of them. It’s about the only places these fish have to spawn on so when you find one, it’s usually got quite a few bedding on it.”

Hawkes, however, is worried that he has “burned up” what fish are on his coveted places and he is going to fish new water tomorrow.

“I’m going to try not to fall into the trap of fishing memories tomorrow and venture on to new water,” he said. “I’ve fished these places so slowly over the last three days that I’m sure I’ve caught all of what they have to offer.”

Steve Wright of Oskaloosa, Iowa, moved up to his best position of the week with four bass weighing 7-11 today. He is now in third with a three-day total of 31 pounds, 13 ounces.

Wright is finesse fishing on the main river and is focusing his efforts on flooded trees that stick off the bank. Wright believes his fish to be post-spawn fish and he has caught a mixture of spots, largemouth and smallmouth all week long.

“The bases of the trees are in 3 to 5 feet of water,” he said. “Then the bank breaks off into deep water. My bites are coming when the lure clears the break and begins to free fall. But being around those flooded trees is key.”

Wright is using a 1/8-ounce jighead, but instead of a finesse worm, he is using a plastic crawfish.

Jay Yelas of Tyler, Texas, said he had a frustrating day thanks to a pair of lost fish

and not being able to get on his best spot.

“It was just one of those days where more things went wrong than went right and that’s fishing – we have those days sometimes,” Yelas said. “I thought the clouds and rain would really help, but they didn’t. I lost a couple of fish, which hurt. Also, I’ve been sharing this one point with another boat and I couldn’t really get on the sweet spot right today.”

Despite the setbacks, Yelas is looking forward to regrouping and getting back on track tomorrow.

“I found a big largemouth on bed at the end of the day that I think I can catch tomorrow,” he said. “And I still think this one point I’ve been fishing has the potential for a big bag of smallmouths. There will be a lot less boats on the lake tomorrow and that should help this place settle down and produce some more fish.”

Clark Wendlandt of Leander, Texas, managed just one keeper bass today and fell to fifth with a three-day total of 29 pounds, 9 ounces.

“I got really bogged down on sight-fish today and it burned me,” he said. “A bunch of new fish just moved up and those new ones are just about impossible to catch. I spent two hours on one largemouth that I couldn’t catch. It would inhale and spit the bait so fast, I couldn’t get a hook in her. Then it started raining, which messed me up. And the day kind of went down hill from there.”

When asked about his plans tomorrow, Wendlandt candidly noted that he would be having a long talk with travel partner and good friend Mike Surman, who weighed in 14 pounds to move into sixth place today, for some fresh ideas.

Rounding out the top-10 pros that will fish the fourth and final day of the Wal-Mart FLW Series on Lake Cumberland:

The big bass winner in the Pro Division is Mark Rose of Marion, Ark., who caught a 6-pound largemouth on Wednesday for $1,500.