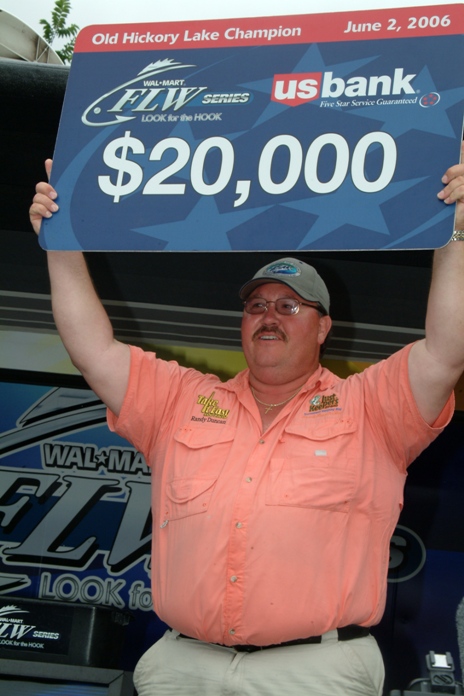 GALLATIN, Tenn. – Despite not even being registered in the Wal-Mart FLW Series tournament on Old Hickory, co-angler Randy Duncan drove from his home in Killen, Ala., to Gallatin, Tenn., Tuesday afternoon with a hunch that he might get into the tournament.

“I was third on the waiting list, so I figured I had a pretty good chance of getting in,” Duncan recalled. “I drove to the pretournament meeting, and sure enough, at 6 p.m. they called my name to get in the tournament.”

Fast forward to Friday, and Duncan found himself standing before a crowd at Bull Creek Marina holding up a winner’s check for $20,000.

“Unreal,” Duncan said. “I just had a feeling on Tuesday that something good

was going to happen, and it did.”

“I purposely tried to do something different from my pros every day,” Duncan said. “Even when they were throwing a finesse worm on a jighead, I’d put my finesse worm on a Texas rig. I never do exactly what the pro is doing.”

His biggest stringer, 10-6 on day two, came on a Carolina-rigged Brush Hog.

“I’ve learned that you can fish a lot of cover behind the boat with a Carolina rig,” he noted. “I’d drag the rig along, feeling for any underwater cover that the boat had already gone over.”

Duncan also credited JJ’s Magic chartreuse dip for giving him an added edge during the week.

“I dipped everything in it – finesse worms, Brush Hogs – and I even got a couple of my pros using it.”

On day two, he switched to a Shaky Head, teamed with a Trick Worm, for 8 pounds, 14 ounces.

And today he went with a split-shot rig for the Trick Worm to catch 8 pounds, 6 ounces.

Broughton collected $10,000 for his runner-up finish.

Stetson Blaylock of Benton, Ark., finished third with a three-day total of 24 pounds, 3 ounces, worth $9,000. Blaylock relied on a mixture of crankbaits and Giggy jigheads, teamed with finesse worms, for his catch.

Pat Hatcliff of Murfreesboro, Tenn., finished fourth with a three-day 23 pounds, 2 ounces for $8,000.

Rounding out the top 10 co-anglers in the FLW Series on Old Hickory: