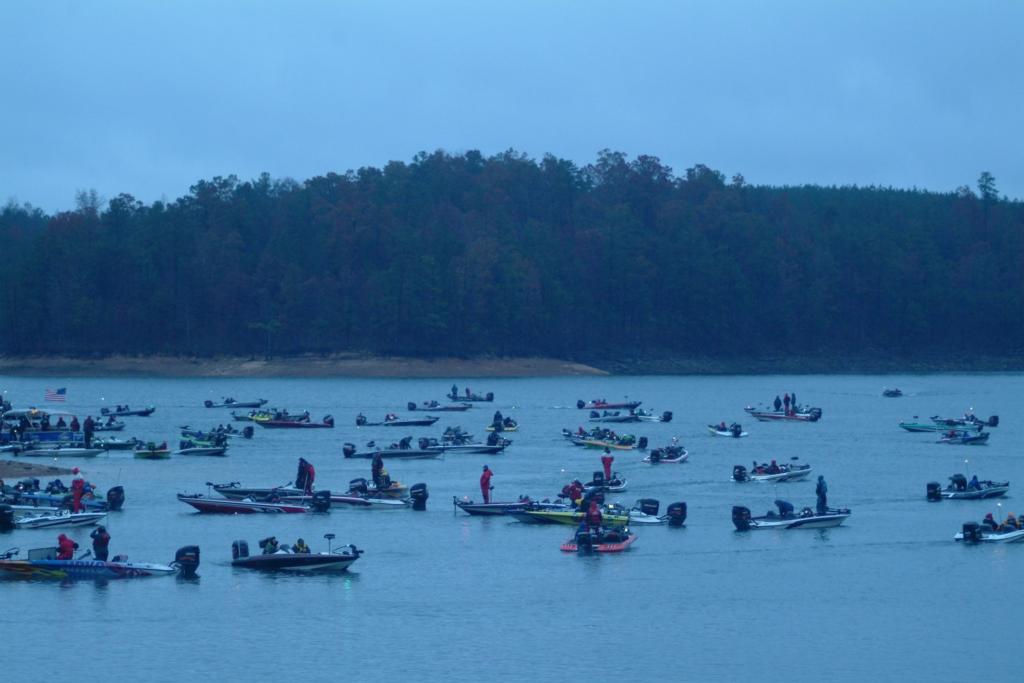 Day one of the FLW Series on Lewis Smith Lake promises to be wet and stormy. Photo by Rob Newell.
November 15, 2006 • Rob Newell • Uncategorized

JASPER, Ala. – The inaugural season of the Wal-Mart FLW Series has been a huge success, especially in terms of FLW Series anglers catching fish.

In what has become a consistent theme on the FLW Series this season, pros poor-mouth a fishery before the event and then proceed to haul limit, after limit, after limit from the lake for the next four tournament days.

The phrase “It’s tough” has become cliché on the Series, a form of crying wolf that no one believes anymore.

First there was a “tough” Lake Lanier in March, which turned into an unbelievable display of spotted bass limits from pros and co-anglers alike. In the end, it took over 10 pounds per day to finish 50th place and receive a $10,000 check.

Then came Lake Cumberland in May. Again, promises of stingy fishing reigned over the pretournament meeting, but Cumberland’s productivity surprised many.

And what about Old Hickory in June? It was supposed to be “tough” too, but for three days in a row, the weigh-in line stayed jam-packed with limit-laden anglers anxious to weigh in their catches.

Most recently, Lake of the Ozarks in October was supposedly going to be a victim of the dreaded fall doldrums. Let’s see, nearly 15 pounds per day just to make the top-10 cut and a four-day winning weight of 71-08 – yep, sounds like doldrums all right.

And as the fifth and final FLW Series on Lewis Smith Lake got under way Wednesday morning, the crying of wolf could again be heard throughout the hills of North Alabama.

This time, the 15-inch keeper limit on bass is what’s making it so “tough.”

But given the skill level of the 374 anglers fishing this week’s event, somehow, some way, plenty of 15-inch-plus bass will find their way to the FLW Series scales.

Lewis Smith Lake is deep and clear and loaded with spotted bass. In terms of other fisheries the Series has visited this year, it would be like mixing Lake Lanier with Lake Cumberland, minus Cumberland’s smallmouths.

“There will be a ton of fish caught,” predicted Greg Pugh of Cullman, Ala. “But a lot of them won’t make the 15-inch mark.”

Pugh noted that over the last four practice days, the deep bite has been best, but he thinks the day-one forecast, which calls for thundershowers all day, some possibly severe, will help level the playing field for nonlocals.

“Weather like this will help bring the better largemouth up,” he said. “Some of those bank beaters will probably bring in some impressive catches on day one. But once the front clears and it gets bright blue and sunny, the locals who know the deeper breaks, brush and rock piles will probably prevail.”

Pugh looks for the tournament to get jump-started with spinnerbaits, buzzbaits 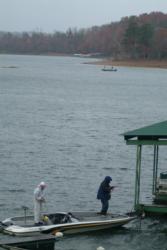 and crankbaits, but believes the end of the week will see a return to small finesse plastics making a run for the top prize of $100,000.

In addition, with this being the final event of the FLW Series, 30 pros and 25 co-anglers, based on point totals, will be invited to the $2 million 2007 Forrest Wood Cup to be held in Hot Springs, Ark., next August.

For this event, anglers will take off at 7 each morning from Lewis Smith Lake Dam. Wednesday, Thursday and Friday’s weigh-ins will be held at the dam beginning at 3 p.m. Saturday’s weigh-in will be held at the Wal-Mart store located at 1801 Highway 78 E. in Jasper beginning at 4 p.m. For those who cannot make the weigh-ins in person, FLWOutdoors.com offers FLW Live daily, an online application that brings fans real-time weigh-in results, streaming video and audio.

At the weigh-ins, children will be treated to the Fujifilm trout pond and rides in the Kellogg’s Ranger boat simulator beginning at noon Saturday prior to the final weigh-in at Wal-Mart. All events are free and open to the public.

In FLW Series competition, pros and co-anglers are randomly paired each day, with pros supplying the boat, controlling boat movement and competing against other pros. Co-anglers fish from the back deck against other co-anglers.