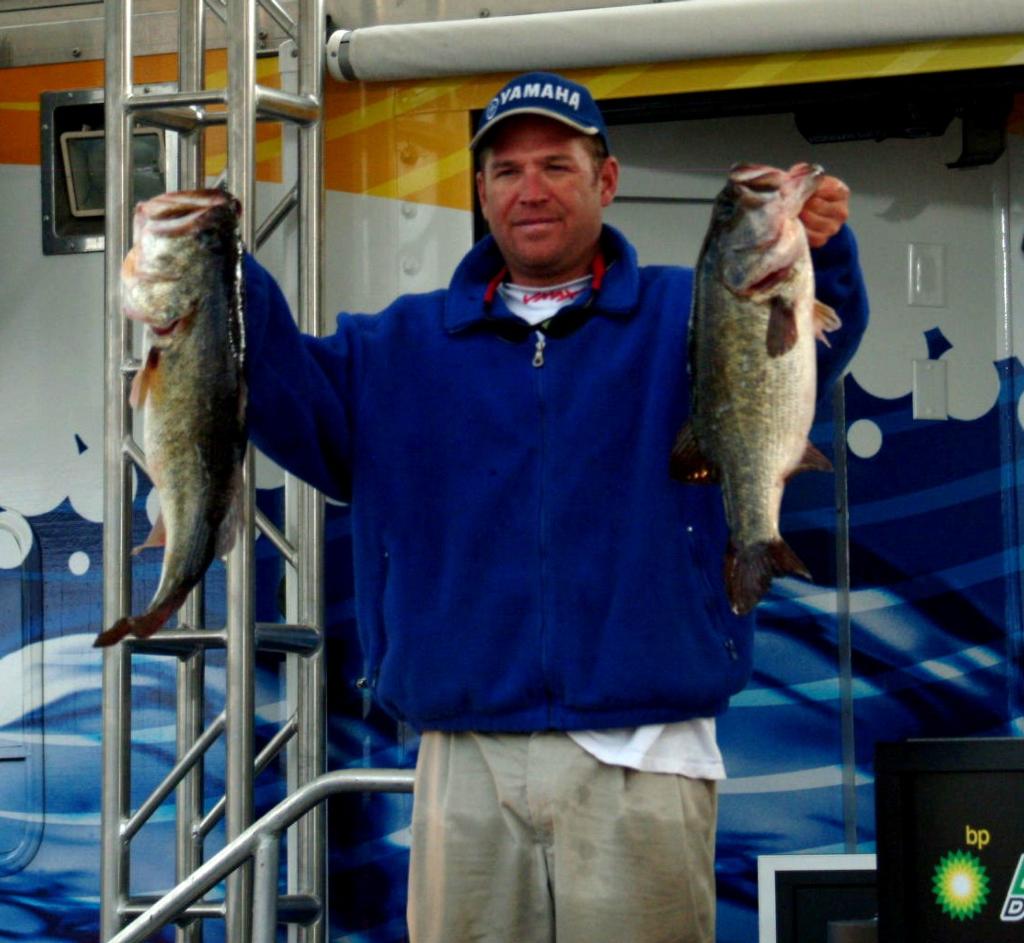 Pro Bud Pruitt caught the heaviest limit of the tournament, but was unable to make it back to check-in in time. Photo by Brett Carlson. Angler: James Allen Pruitt.
January 25, 2007 • Brett Carlson • Uncategorized

Pruitt blew it … Every angler and fishing fan had a heavy heart Thursday for pro Bud Pruitt. Yesterday Pruitt put himself in excellent position to make a serious run in this tournament, catching 15 pounds even. His day-one co-angler partner, Pam Wood, also caught 15 pounds, so it was evident that he was around tournament-winning fish. Today Pruitt executed on the water the way most pros only dream about. He had over 25 pounds in his boat at 1 p.m., so he decided to play it safe and head back early. What happened next is a vivid depiction of some of the challenges pro fishermen deal with on a regular basis. On his way back to the marina, Pruitt inadvertently beached his boat so far on shore he and his partner were unable to get it back in the water. Pruitt isn’t solely to blame, as severe north winds basically blew several inches of water out of the area. He and his partner both missed their check-in time, and their weights had to be disqualified for the day. Painful as it is to write, Pruitt would have a two-day total of over 40 pounds and roughly a 13-pound lead over first-place pro Jason Knapp heading into day three. As it stands now, he sits in 83rd place. Thankfully, both anglers were able to flag down an airboat and make it in safely. “I’m just going to have to bear down,” said the Spring, Texas, native. “I was trying to be safe. I may never truly get over this, but I guess you’ve just got to learn from your mistakes.”

ChatterBait alive and kicking … Debuted at Lake Eufala in 2005, the ChatterBait really made a name for itself at the 2006 Stren Series Southeast Division event on Lake Okeechobee. At that tournament, the pro winner, Bryan Thrift, threw it exclusively for his first victory as a pro. It gained even more notoriety a few weeks later at the Wal-Mart FLW Tour event held on the Big O. So where’s the ChatterBait this year? According to its pioneers, Thrift and fellow pro Andy Montgomery, it is alive and well. Montgomery, who sits in 21st place, claims he has caught four of his 10 keepers on the ChatterBait. Thrift is relying on it even more, with seven of his 10 keepers caught on it. While they still use it, they admit it’s probably not as effective as it was last year when the water was higher. “Last year they were staging, and this year they’re so shallow you can hardly get to them,” Montgomery said. With the shallow water in mind, Thrift and Montgomery have pulled out a new version of the bait called the ChatterFrog. Rather than the black and blue ChatterBaits the two used last year, they’re employing a frog-scale pattern that is lighter and rides higher in the water column. Either way, it looks as though both anglers will cash sizeable paychecks with their crazy new baits.

Eventful week for Knapp … On stage today, Knapp was applauded not only for his ability to catch Okeechobee bass, but also for his kindness in helping an angler in need. His friend and practice partner, Kevin Bishop, had engine problems early this afternoon. Despite having nearly 20 pounds of fish in his livewell, Knapp unselfishly welcomed Bishop and his co-angler into his boat for a long and bumpy ride back in blustery winds. In fact, Bishop’s boat is still tied to a dock on the other side of the lake. What Knapp didn’t tell you on stage today was that he spent most of his time yesterday beached on land rather than trying to finagle fish. Running in a narrow canal at about 12:30 p.m. Wednesday, his propeller hit something and locked up, while his boat scooted up over 35 feet on dry land. He and his partner spent the next few hours easing their way back in with a push pole. “My back is still killing me from forcing it back in the canal,” said the Uniontown, Pa., pro. “After that accident, I was just shaking like a leaf.” So while Knapp’s name looks good on top of the day-two leaderboard, there have certainly been some hairy moments in between. 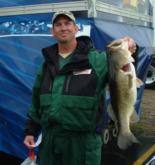 Every cast counts … You hear these kinds of stories all the time in the world of professional bass fishing, but they never seem to get old. Today co-angler Joe Partain and pro Ron Shuffield were struggling with the severe cold front, just as the majority of the field was. With their baits in the water as often as possible, the two kept their focus and never gave up. On his second-to-last cast, Partain hooked up with an 8-pound, 1-ounce monster that pushed him all the way up to fourth place in his division. Without the fish, Partain would be stuck in the middle of the pack. Just further proof that one cast and one bite can make all the difference in the world, especially on Lake Okeechobee.

12-11: Weight, in pounds and ounces, of Pruitt’s lead over Knapp had he checked in on time.

40-11: Weight, in pounds and ounces, of Pruitt’s unofficial two-day total.

1: Number of bass weighed in, in unreleasable shape by the entire co-angler field.

61: Number of five-bass limits caught by the entire pro field.

5: Number of five-bass limits caught by the entire co-angler field.

9-3: Weight, in pounds and ounces, of the heaviest bass of the tournament, caught today by co-angler Brad Wiegmann.

“I’m soggy in places I shouldn’t be,” – Chevy pro Dion Hibdon, who may be in the market for new rain gear.

“I want to thank my kids for the waterproof boots they got me for Christmas. I needed them today.” – pro Rick Bales.

“This is the coldest Florida day that I can remember.” – Leander, Texas, pro Clark Wendlandt.

“This lake is fishing like an entirely new lake right now with the water being so low.” – Clewiston, Fla., native Scott Martin.

“I’ve fished out of every boat you can imagine, but nothing rides like my new Ranger.” – FLW Series Old Hickory Lake champion Sam Lashlee.