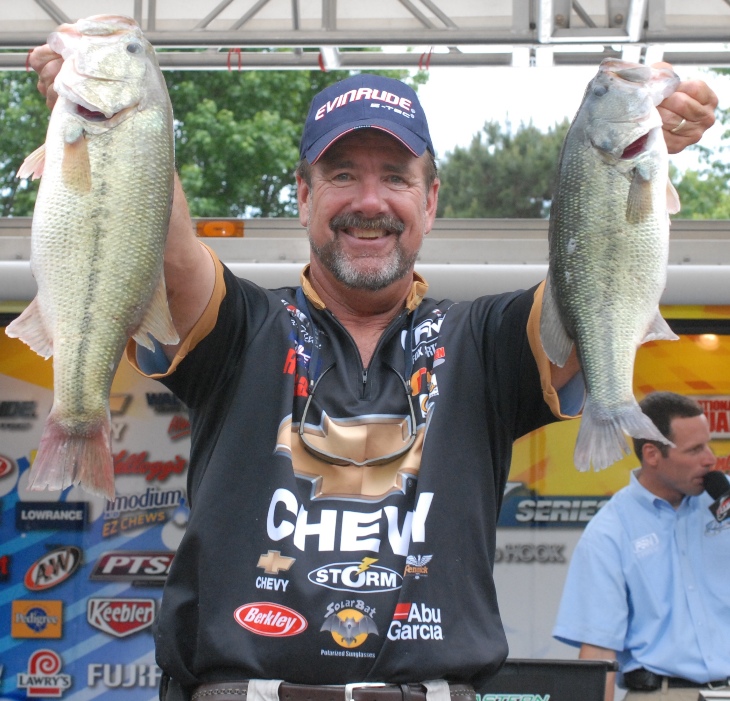 RUSSELLVILLE, Ark. – If you have ever wondered what professional bass anglers mean by being in the zone, study Larry Nixon right now.

Nixon got off to a slow start on day one with 11 pounds, 10 ounces. On Thursday he found his groove again, sacking the tournament’s biggest catch: 21 pounds, 9 ounces. And today he followed it up with 17 pounds, 12 ounces.

Clearly, Nixon is enjoying one of those special times in his career, and his fishing shows it.

“When you get in one of these special deals like this, it’s hard to describe it,” Nixon said, “I’m very content in what I’m doing. I feel comfortable on the water right now. I’m taking my time and reading every detail out there; I feel like I know every move a bass is going to make.

Nixon is fishing right in his comfort zone. Known as one of the best in the business with a Texas rig, that’s exactly what he is using to catch his fish.

“Most of the fish I’ve weighed in I’ve caught on a 10-inch Berkley Power worm,” he said.

Nixon did reveal he is fishing muddy water, but did not want to elaborate on the details because it holds the key to his pattern.

“The muddy water is working to my advantage,” he said. “I’ve seen some other boats around me, and I can see the mistake they’re making with this water the way it is, so I don’t want to say a whole lot about it right now.”

David Walker of Sevierville, Tenn., is another angler fishing well this week.

“I don’t have a spot where I can go catch a bunch of fish real fast,” Walker said. “For me it’s all about persistence and staying in there and grinding it out. I only caught seven keepers today, but the fish I’ve caught all week seem to be a little better quality, averaging 3 pounds or better.”

After three days, Walker said he has given up trying to figure out a detailed pattern.

“Today I fished the edges and points of the grass like we’re `supposed to,'” he said. “And after not catching any, I just decided to plow right up through the middle of that grass and fish shallow – and I caught two of my best fish up in the middle of that stuff. So the less I think about what the fish are doing or how they’re positioned, the better I do. And just about the time I think, `This place is toast, and it’s over’ – bang, I catch another 4-pounder out of nowhere, and it keeps me in the game.”

David Lawson of Richmond, Ky., moved up to his best position of the week, third, with a 15-pound, 7-ounce catch today for a three-day total of 47 pounds, 3 ounces.

Lawson reported catching his fish the first two days off small drops just outside the grass beds. Today, however, he moved to a much deeper drop.

“My shallower drops didn’t work out well this morning, so I went to a really deep drop – like straight down to 20 feet – and I found the fish there,” he said. “That’s the deepest I’ve caught them all week.”

Matt Herren of Trussville, Ala., also moved up to his best spot of the tournament,

fourth, thanks to his best stringer of the week – 17 pounds, 6 ounces.

“I’ve got one little sweet spot in the back of a creek, where a 6-foot flat meets a creek channel, and I’m milking it for all it’s worth,” Herren said. “I’ve got 11 rods on the deck, and I’m alternating between those rods, showing them something different every time I pass through there. I’m cranking, dragging a jig, throwing a shaky head, slow-rolling a spinnerbait, and I’ve caught them on just about every rod I have out.”

Each day Herren’s sweet spot has replenished with new fish.

“It’s just a classic funneling spot where fish are moving back out to the deeper channels,” he added. 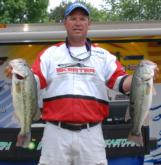 Bud Pruitt of Spring, Texas, sacked one of the biggest limits of day three, 19 pounds, 6 ounces, to rocket from 30th to fifth with a three-day total of 45 pounds, 3 ounces.

Theron Caldwell of Fort Worth, Texas, boated a Dardanelle lunker today weighing 7 pounds, 1 ounce for the Snickers Big Bass in the pro Division.

Rounding out the top 10 finalists, who will fish the final day of the FLW Series Eastern on Lake Dardanelle on Saturday:

The top 10 pros take to the water for the final day of competition Saturday morning at Lake Dardanelle State Park at 6:30 Central time.