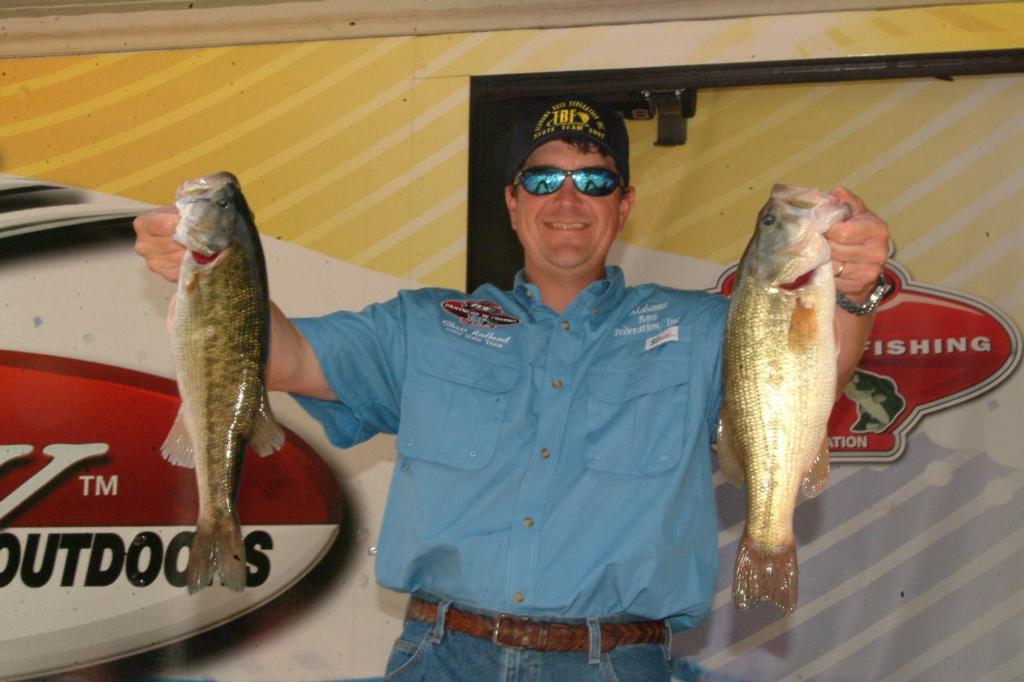 PRATTVILLE, Ala. – It was hotter than blue blazes on the Alabama River to kick off day one of The Bass Federation Southern Divisional Championship, but a 10-mph wind tried its best to cool off contenders. However, the wind may have done more to irk the anglers than cool them.

Bothersome as it may have been to some, the wind did little to hinder Chris Rutland of Wetumpka, Ala., who caught a five-bass limit weighing 12 pounds, 5 ounces to lead the Alabama state team as well as the 84-man overall field. His catch also propelled Alabama to the top in state-team standings, as the 12-man team caught 87 pounds, 13 ounces of bass on day one. That state catch leads the No. 2 South Carolina team by a whopping 22 pounds, 12 ounces.

This week’s championship features 12 competitors from seven states – Alabama, Florida, Georgia, Kentucky, North Carolina, South Carolina and Tennessee. Six of each team’s members compete out of their own rigs as boaters, and six are entered as co-anglers. However, every competitor is afforded front-of-boat fishing time.

Cash awards at this week’s event will be awarded to the top state, and the overall individual weight leader will earn a $500 Wal-Mart gift card as the Castrol Maximum Performer. Competition among the 12 members of each state’s team is intense, as the No. 1 angler from each state earns a berth in the 2008 TBF National Championship as a boater. The runner-up competitor from each state advances to the championship as a co-angler.

Rutland takes local knowledge all the way to the top

Rutland’s 12-5 limit afforded him a 2-pound lead over Greg Vinson, also of Wetumpka, who caught a limit weighing 10 pounds, 5 ounces to trail Rutland in Alabama standings as well as on the overall list.

The town of Wetumpka sits less than 20 miles from the tournament host city of Prattville, and Rutland admits his local talent took him a long way today.

“I fish down here a lot,” he said. “I was just running my sweet spots, doing a lot of different things.”

Though he’s in the enviable No. 1 position after day one, not everything was coming up roses for Rutland today. He says he lost a pair of 2-pounders that would have allowed him to cull at least one more time.

Rutland estimates he caught about 20 keepers today, though many of them were small. He reported catching both spotted bass and largemouths, as did the majority of the field.

“I caught them shallow early and then deeper as the day went on,” he said. “I got them on a new Vicious Fishing Jig – it’s not on the market yet – and a Paca Craw trailer.”

With his extensive knowledge of the Alabama River system, Rutland obviously feels good about his chances the next two days.

In third on the overall weight list and first on the North Carolina team is Brian Travis of Conover, N.C., with a day-one limit weighing 9 pounds, 15 ounces. Travis, who is competing as a boater this week, leads his state team by a 1-pound, 8-ounce margin.

“It was tough,” he said. “I had been getting an early morning bite all week (in practice), and this morning, I didn’t get a bite. Once the sun came up, I started flipping a jig in the shade and caught a limit.”

Travis said that at one point, his co-angler had outfished him four fish to one, though he ultimately bounced back and put five in the livewell thanks to his pattern of fishing around wood.

“It was a little stressful for a while,” he said. “I ran probably 38 miles one way today. The fish seemed to be somewhere around 10 feet deep, and they had to be near wood.”

Taking a slim lead in South Carolina state competition is Craig Fredrychowski of Lexington, S.C., whose day-one limit of 9 pounds, 10 ounces edged past Robert Rikard, also of Lexington, by only 5 ounces. Fredrychowski’s limit also landed him in fourth on the overall weight list.

“I found these fish on Friday, and they were active on the top,” Fredrychowski said. “We had a little cloud cover this morning, and they were cooperating.”

Fredrychowski is competing this week as a boater, and his early limit allowed his co-angler partner to spend a good amount of time finding his own fish.

Fredrychowski had a solid practice and, as such, looks forward to the next couple of days.

“I still haven’t gone to a few of my best spots,” he said.

Black leads Florida with another championship in view

Wayne Black of San Mateo, Fla., qualified for the 2007 TBF National Championship via the Southern Divisional last year and went on to win the whole thing, leaving Lake Norman in North Carolina $5,000 richer as the 2007 co-angler champion. He’s making a run for another championship slot this year with a day-one catch of 9 pounds, 2 ounces that puts him on top of the Florida state team by 8 ounces.

Making Black’s catch – and lead – all the more remarkable is that he pulled it off with only three bass, one of which weighed 5 pounds, 7 ounces. That fish earned Black $250 as the day-one big-bass winner.

“It went a lot better than I expected,” Black said of his day-one experience. “I went to a spot yesterday in the storm – everybody was heading back, but I was headed south. I got one good bite and told myself that I’d go back there today.”

That one good bite was one of the only good bites Black had found in pretournament practice, so he knew he was on to something.

“I caught a couple of keeper fish each day in practice, but I never put anything together,” he said. “We both should have limited out today; we just missed them.”

In seventh on the overall weight list and first on the Kentucky state team is David Taylor of Louisville, Ky., with a day-one limit weighing 8 pounds, 15 ounces. That catch gave him a slim 5-ounce lead in his state over Todd Leatherman of Paducah, Ky.

“I had a very good day,” said Taylor, who is competing this week as a co-angler. “We just decided to go fishing and caught probably 25 keepers between the two of us. We were throwing a Carolina rig with a top-secret bait on it.”

With a 5-ounce lead and changing conditions, Taylor can’t be blamed for wanting to keep his hot bait a secret for now. Like most, Taylor and his day-one partner were affected by today’s winds.

“It changed a lot from practice,” he said of the river. “We noticed the water was down this morning, and it seemed to rise as the day went on. This is the first day we dealt with the wind. The fish were in the creeks, so we had to switch to the main lake.”

Wayne Bennett of Nashville, Ga., caught a five-bass limit weighing 8 pounds, 14 ounces to claim the day-one Georgia state lead by 1 pound, 6 ounces. The catch also put him in ninth on the overall list. On the Georgia team, he currently leads No. 2 Randy Duncan of Columbus, Ga., who caught 7-8 on day one.

“We were hitting points and cuts and throwing plastics and crankbaits,” Bennett said of his day-one strategy. “It was pretty tough. The fish bit pretty good, but as the day went on, it got tougher.”

Bennett said he fished a spot about 30 miles away from the launch ramp, noting it was not an area he had fished in practice. Depth also didn’t seem to be an issue for Bennett today.

“We caught them deep, and we caught them shallow,” he said, adding that his chances the next couple of days were “pretty good.”

No. 1 on the Tennessee state team is Brent Butler of Vonore, Tenn., whose five-bass catch weighing 8 pounds, 5 ounces afforded him a slim 4-ounce lead over Chad Hillis of McMinnville, Tenn.

Butler, competing as a boater this week, reported tough going on the Alabama River today.

“Everybody was pounding them all during practice,” he said of the river fish. “You’ve just got to fish hard. (The key was) running, gunning and flipping. I probably made 80 to 85 stops today.”

That hectic schedule paid off, as Butler not only led his state but also met his personal goal.

Butler is fishing this week in memory of his friend Junior Dean, who died last week after a battle with cancer.

“He took me fishing since I was big enough to walk, and he got me started,” Butler said of Dean. “I’m sad I couldn’t get back to go to his funeral, but I did what he’d have wanted me to do.”

TBF Southern Divisional qualifiers will head out again tomorrow on the Alabama River with a 5:30 a.m. takeoff from Cooters Pond, located at 1844 Cooters Pond Road in Prattville. Tomorrow’s weigh-in will also be held there beginning at 2:30 p.m.