Fishing fans, welcome to the second season of Pundits’ Picks Walleye. We may not boast $7.3 million in cash and prizes for fantasy fishing like the bass boys, but we hearty Midwesterners persevere for the love of the walleye. For those new to the feature, log on to FLWOutdoors.com the Friday before each FLW Walleye Tour event to see who the so-called experts like in the upcoming contest. We can’t promise accuracy, we can’t promise precision, but we can promise a little good-natured pretournament trash talking. The competition will pit pros v. staff throughout the season to see who qualifies for the pundit championship. After three regular-season events, each pundit will be seeded according to their record for the playoff round. Only three pundits advance from the playoff round to the championship, a winner-take-all affair that goes to the person who accumulates the most points.

Last thing, the disclaimer: The picks in this column in no way represent any sort of favoritism on the part of FLW Outdoors staff or its pro anglers. These are merely guesses – only arguably educated – as to who we think might do well at any given tournament. With that in mind, here are the picks.

When the 2008 Walleye Tour schedule was announced, it was assumed by all that the circuit’s season- 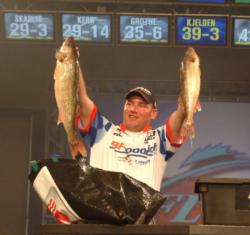 opening stop would be an absolute slugfest. Lake Erie, particularly its western basin, is perhaps the best walleye fishery in the world. Mid-April is also primetime for big females in the 9- to 12-pound range. Unfortunately, a wet and cold spring has kept the water dirty and the fish at bay. Initially, most pros assumed it would take nearly 100 pounds after three days to make the top-10 cutoff. Those predictions might need to be adjusted somewhat. The current weather in Port Clinton, Ohio, is absolutely miserable, with high winds and a rain/snow mix. The good news is that stable weather is on the way. The nasty front currently plaguing the area is supposed to leave on Monday afternoon – giving competitors little meaningful practice time. The four-day tournament forecast calls for partly cloudy skies with temperatures in the upper 50s to low 60s. Simply put, practice promises to be a completely different animal than the actual tournament. Still, this is Erie, and although Canadian waters are off-limits, plenty of hefty sacks will be brought to the scale by the best walleye fishermen in the world.