Blow, blow, blow your boat gently down the Delta 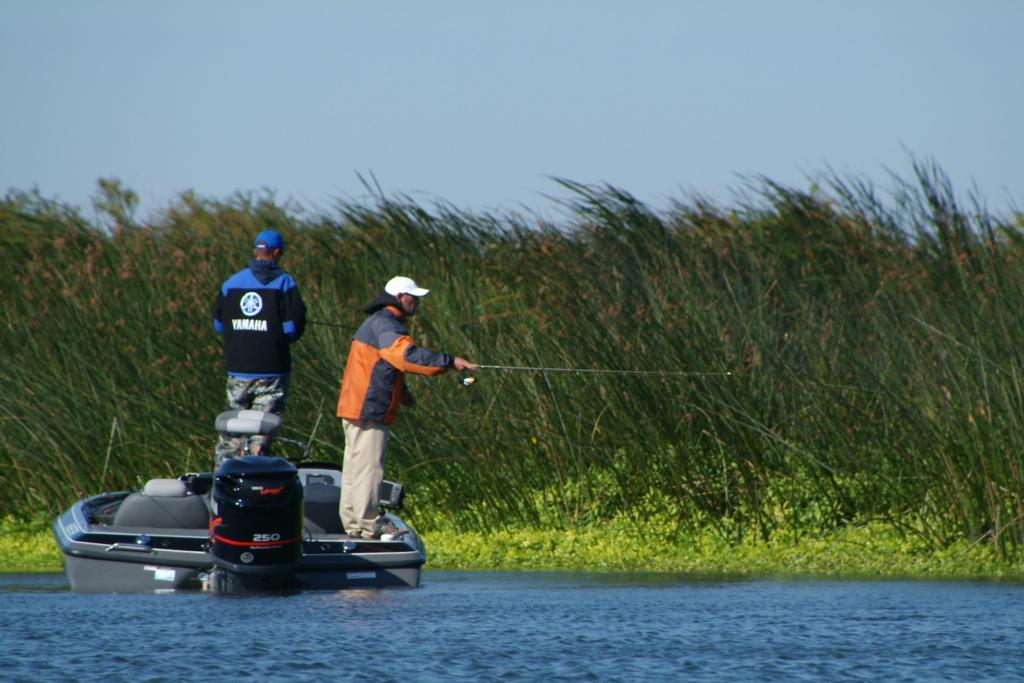 Strong winds Thursday on the California Delta made it necessary for anglers to find protected water. Those who didn't saw their fishing success perish. Photo by Vince Meyer.
October 9, 2008 • Vince Meyer • Uncategorized

OAKLEY, Calif. – Wind seldom is a bass fisherman’s friend. On day two of the Walmart FLW National Guard Western Division tournament the California Delta was an unfriendly place to be.

Winds in excess of 30 mph blew from the north all day, whipping up whitecaps on the Delta’s open water tracts and sending a field of 120 pros and 94 co-anglers in search of protected water. For some that wasn’t bad; that’s where they were fishing from the start. But others junked entire game plans and when that happens the results are seldom good.

To nobody’s surprise, both Reynolds and Monroe are locals by birth, though the former has since moved to Modesto, Calif. and the latter to Hughson, Calif. But when back on the Delta they’re in their comfort zone, even when heavy wind makes the Delta a decidedly uncomfortable place to be. 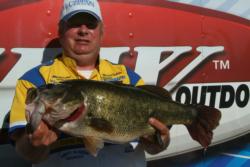 “It hurt me, but it’s hurting a lot of guys more,” said Reynolds, who also weighed the big bass of the day at 8 pounds, 3 ounces. “I’m fishing an area that’s usually protected, but this was a north wind today and I fought it hard.”

Reynolds said he had 10 bites all day and that none came where he caught his five weigh fish yesterday. Most pros are tight-lipped about their presentations. Not Reynolds. He readily admits his best bait has been the Sweet Beaver, a crawdad bait he’s rigged Texas style.

“Everybody throws ’em,” Reynolds says with a shrug. “It’s one of the main baits around here.”

Combined with Wednesday’s nearly identical weight of 22 pounds, 2 ounces, Reynolds now carries a total weight of 44 pounds, 8 ounces into Friday’s third round. But he said he’s worried about Friday because he’s in an early weigh-in flight and most of his better fish have been caught later in the day.

Monroe, on the other hand, is anything but worried. That’s a luxury that results from averaging 50 bites per day since the tournament started. Some pros haven’t had that many bites since they started pre-fishing.

“Having a bit of local knowledge really helps on this lake,” Monroe admits. “But the wind changes everything. It blows out entire areas.”

But for every pro like Reynolds or Monroe, who have thrived in tough conditions, there are many others like Stephen Pike of Las Vegas, Nev., who’s holding down last place with one bass weighing 1 pound.

“Absolutely it helps me,” Pike said when asked if the wind is affecting his fishing. “It takes the rest of these guys out of their game.”

Rounding out the top 10 in the Pro Division: 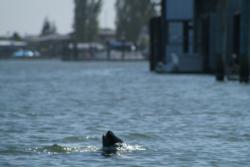 Lucas leaps to the top of co-angler standings

Justin Lucas isn’t one of those co-anglers who’s along for the ride and who says on stage at weigh-ins that’s he’s happy just to be here. The Folsom, Calif. angler approaches tournaments as seriously as any pro, often trailering his own boat to tournament sites and going through the pre-fishing ritual.

Lucas is serious about winning and it shows. This season on the western division he’s placed first at the Columbia River, third at Lake Mead and eighth at the California Delta’s first tournament. He even dresses like a pro, eschewing the workmanlike duds worn by most co-anglers in favor of the natty outfits splattered with sponsor patches worn by the pros.

Lucas has fished as a pro and will again, but for now he’s intent on nailing down his second victory of the season in the amateur ranks. After Thurday’s second round he’s in first place with 24 pounds, 5 ounces.

“I like to do my own thing back there,” Lucas said when asked how he approaches a tournament as an amateur. “I let the pro do what he does and I do what I do. It works better that way.”

Rounding out the top 10 in the Co-angler Division: 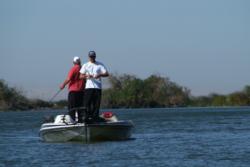 Pros and their co-angler partners will take off from Russo’s Marina at 7:15 a.m. The co-angler title will be decided after Friday’s round. The top 10 pros will continue on to Saturday’s final round, with accumulated weight from all four days deciding the winner. Saturday’s weigh-in will begin at the Walmart in Antioch, 4893 Lone Tree Way, beginning at 4 p.m. Children will be treated to a Family Fun Zone on Saturday from noon to 4 p.m. There will be a trout pond, Ranger boat simulator and various fishing games. All activities are free and open to the public.