Hack blasts past the pack 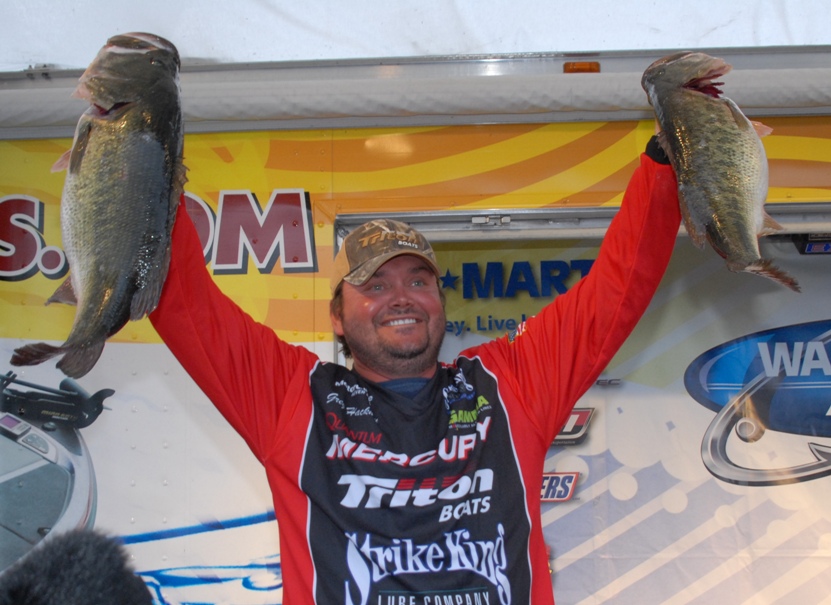 And while a few matchups did offer some close finishes, in the end it was a three-man race for the tournament’s winner-take-all purse of $25,000 that became the most exciting matchup of all.

That’s because for two days David Fritts, Terry Bolton and Greg Hackney all brought in 30-pound-plus limits to grapple for the overall lead. And with 6-pound bass being “a dime a dozen on Falcon,” as Fritts commented, none of the three pros had any intention of slacking off going into day three. In fact, all three felt pretty confidence that their respective fishing areas could produce a 40-pound limit on the final day.

And when the pros’ feet hit the bank for the final weigh-in on day three, whispers of possible 40-pound bags among the leaders filtered through the weigh-in line.

What’s more, when three giant tails are protruding from a weigh-in bag because the first two bass in the bag took up all the room, it’s kind of hard to disguise what kind of catch a pro has.

The real excitement began with Bolton, whose day-three limit topped the scales at 38 pounds, 15 ounces to give him a three-day total of 105-8. 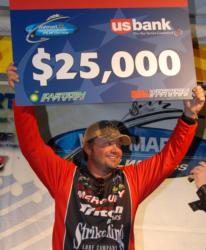 Finally, it was Fritts’ turn, but the Chevy pro’s wheels ran off on the final day – well, if you can consider 19-6 as wheels running off. Unfortunately that’s the harsh reality of Falcon Lake.

So in the end, it was Hackney’s week to shine.

For just a quick review, here’s what Greg Hackney accomplished during an amazing week on Falcon Lake.

One, he rewrote the FLW Outdoors record books. He now owns the heaviest single-day five-bass limit at 39-11. He also came within 15 ounces of beating FLW’s all-time cumulative tournament weight record, and he did it in just three days. The current record is held by Jeremy Guidry, also from Louisiana, who caught 110-2 in four days on Falcon during the Stren Series event held there in January of this year.

Two, he earned a ticket to the 2009 Forrest Wood Cup by crushing his Western competition, John Billheimer, by some 80 pounds.

“What a week!” Hackney said after the win. “This is just unbelievable. To end my 2008 season this way makes it all worth it. I’m so pumped right now I can’t even explain it.”

Hackney’s success this week came from two specific areas located near the dam on Falcon.

The first was a submerged pond dam and the other was big flat, which was crowned with a fence row and gravel road bed before falling off into the main channel. 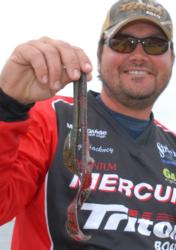 “The main thing that both areas had in common was a hard clean bottom that dropped off vertically into deep water,” Hackney explained. “All those big fish were sitting up on top of the hard bottom in 10 to 20 feet of water right where it fell off into deeper water.”

“The whole key was to keep that worm in constant contact with the bottom,” he said. “I never lifted my rod or raised it to swim the worm at all. I held my rod in one position and barely crept the worm along the bottom with the reel only. If the worm lifted off the bottom, they would not eat it; it had to be crawling on the bottom.

“I’ll remember this week as long as I live,” he added. “The thrill of setting the hook into every one of those bass and just wondering how big it was – 9 pounds? 10 pounds? 12 pounds? – I still get chills thinking about it.”

How would you like to fish a bass tournament, catch 105 pounds, 8 ounces over three days and still not win? 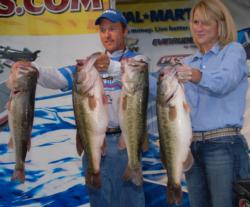 Welcome to the world of Terry Bolton. Despite weighing in 38-15 today and breaking the century mark, he still ended up some 4 pounds short of victory.

Bolton, however, is the first to point out that his week was the result of some tremendous good fortune.

During practice over the weekend, he happened to be in an area where he witnessed a couple of anglers reeling in giant bass for a local tournament that was going on.

Bolton made a mental note of it and returned later to investigate the area for himself. After spending a great deal of time fishing and graphing the area, he finally found the sweet spot.

“There was one precise cast you had to make at just the right angle,” Bolton said. “If you were just a tad to the right or left, you’d never know there was a gazillion pounds of bass living down there. But once I hit the sweet spot, it was a big one every cast.”

Bolton believes that the key element on the bottom was an old road bed.

“The road bed was probably on dry land before the water came up,” he said. “But I think it kind of intersected with the old shoreline; it was a hard, clean bottom, and they were loaded on it.”

Bolton’s two main lures were a 10-inch Zoom Old Monster topped with a 1/2-ounce Tru-tungsten weight and a Rapala DT-20 crankbait in chartreuse and brown.

To make his week even more memorable, Bolton got a little surprise at the day-three weigh-in. Unbeknownst to him, his wife, Pam, who is part of the National Guard fishing team, flew all the way from Jonesboro, Ark., to Zapata, Texas, to witness the incredible week he was having.

In fact, Bolton had no clue that his wife was even on the scene until he climbed the stage to weigh his fish. Then she appeared, much to his surprise, and helped him weigh his fish.

“This only makes this week even more special,” Bolton said. “No matter what, this has been the coolest week of my life. I’ve caught the three biggest stringers of my life, my wife showed up to help me weigh in the 38-15 today, and I earned a spot in the Forrest Wood Cup.”

It’s hard to believe that anyone could call catching 19 pounds, 6 ounces a bad day of tournament fishing, but when you’re in contention for a win on Falcon Lake, anything under 20 pounds barely gets an honorable mention.

And that’s exactly what happened to cranking king David Fritts today. After leading the first day and barely falling to second on the second day, Fritts slipped off the blistering Falcon pace today with just 19-6, leaving him in third place overall with a three-day total of 89-15.

The Chevy pro spent the week cranking a DT-14 (brown bone and hot mustard) on 14-pound test Suffix line around the tops of submerged bushes.

“I probably hurt my places a little too much yesterday,” Fritts said. “I culled three bass yesterday that weighed 6-9 a piece and several others right at 6-pounds before that, so I threw back a 30-pound bag yesterday. But I was going for the win, I wanted to catch a 40-pound bag yesterday and I think I just went through too many fish.”

All is not lost, though. Fritts easily qualified for the Forrest Wood Cup by winning his match up by some 50 pounds. 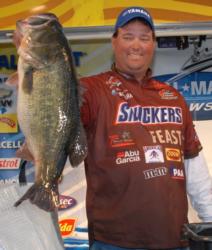 What’s more, Baumgardner weighed in the biggest bass of the tournament – a 12-pounder – on day three.

“That’s what you come to Falcon for right there,” Baumgardner said while holding his fish up for photos.

Baumgardner’s main pattern all week was to fish “point bushes” with a spinnerbait – a 1/2-ounce homemade model, featuring a white and chartreuse skirt.

“The fish were suspended in the tops of those point bushes out on the main lake,” Baumgardner said. “I was only getting seven or eight bites a day, but they were all big ones.”

Koby Kreiger of Florida garnered a spot in the 2009 Forrest Wood Cup this week as well by amassing a three-day total of 82-14.

Kreiger’s primary Falcon pattern was to fish “fluffy” mainlake bushes with a 1-ounce Oldham’s spinnerbait and a Zoom Brush Hog.

“The biggest, bushiest flooded trees were the best,” Kreiger said. “The fish were suspended around the tops of them and the spinnerbait did most of the damage.”

Fun with the numbers

With the head-to-head matchups over, here’s a look at a few of the more interesting duels: 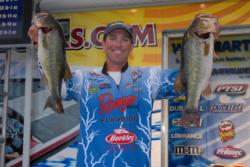 Closest match-up: Believe it or not, one of the match-ups came down to a single ounce. That’s right, Michael Rooke of Lake Havasu City, Ariz., beat out Jonathan Newton of Rogersville, Ala., for a Forrest Wood Cup berth by a single ounce. Rooke had 44-2 compared to Newton’s 44-1.

Lowest qualifying weight: Chris Zaldain of San Jose, Calif., is going to the Forrest Wood Cup on a three-day total of 43-6. Even with that, he easily defeated Georgia’s Tony Couch who had just 21-3.

Highest loosing weight: This one is painful, but it always happens in this head-to-head format. Coppertone pro Brett Hite caught the highest weight in a loosing match-up: 69 pounds, 9 ounces. He was defeated by BP pro David Walker who caught 76-14.