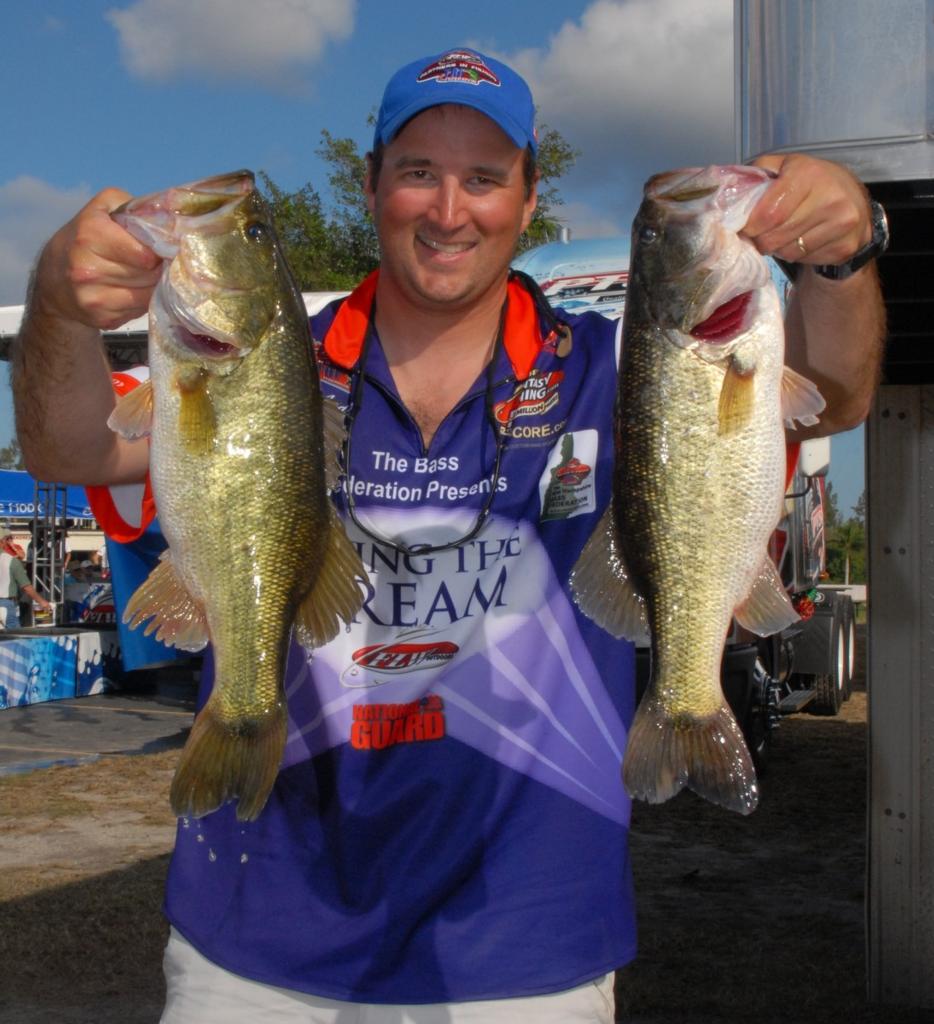 Editor’s note: This is the second piece in a series of journal entries from Dave Andrews, winner of the 2007 TBF National Championship, detailing his fourth stop on the 2008 FLW Series Eastern schedule. Clarks Hill Lake marked the final event of his “Living the Dream” season. Entries were published at FLWOutdoors.com throughout the course of the season. As winner of the Living the Dream package, offered by FLW Outdoors through The Bass Federation, Andrews had his entry fees paid to test his club skills on the pro tour with the use of a fully wrapped boat and tow package. Andrews will chronicle his adventure in pro bass fishing, having most recently competed on Georgia’s Clarks Hill Lake. Segments of his journal will be posted approximately weekly. (Read Part 1)(Read his Lake Champlain journal; this links to the final entry, which provides links at the top for each preceding part)

On the third official practice day, Scott and I launched the boat at Spring Creek and headed up the Little River. The plan was to work some of the points and pockets near Grays Creek to see if we could expand on our spinnerbait bite and find some new water.

The morning was cold, probably 45 degrees when the sun came up, but sunny. When I say sunny, I mean it. Nothing but pure blue skies, and I never did see a cloud all day. It was classic bluebird, post- 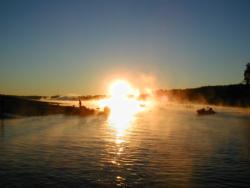 front conditions. We worked fast across a mix of points and small pockets with grass in them. The day warmed up pretty fast, and there was no wind. The bite was terrible. We picked up a few small keepers here and there, but it was abundantly clear that the high-pressure conditions had given the bass lockjaw.

The lack of a decent bite was no big deal, as we figured to make the best use of our time by doing a lot of driving around and looking rather then actually fishing. We spent several hours cruising slowly up the Little River, weaving in and out of the standing timber. I didn’t get a great feeling about this stretch of Clarks Hill. The shorelines were hard to get to with all of the timber, and the weed growth was minimal in most of the areas that we looked in. We eventually worked our way back toward the Savannah River arm and began running pockets in this area.

It was early in the afternoon – the lake was as flat as a millpond – when I worked the Ranger into a nondescript pocket with some broken-down docks in the back end. I had long since put the spinnerbait down and had gone to finesse-fishing. Before I left New England, I had asked one of my sponsors to make up a special bait for me to try. I had heard that a Super Fluke was a good choice for Clarks Hill, so I asked the folks at Netters Inc. to make me a special color of their minnow-type soft plastic. They call their bait a “Chub.” It is essentially a 5-inch soft-plastic, minnow-style bait that I rig weightless on a 3/0 Gamakatsu hook. The custom color I had made up was light blue/pearl, much like the local baitfish of choice for Clarks Hill largemouths, the blue-back herring. I finished off the setup with a Daiwa spinning reel, a Fenwick Techna AV 6 1/2-foot medium-heavy rod and 8-pound Gamma fluorocarbon.

We hadn’t had a bite in hours when I began fishing the Netters Chub, skipping it up under the docks and along the weed edges. Soon, a fish picked up the bait and I set the hook. A largemouth of about 3 1/2 pounds came flying out of the water. I eventually subdued the fish, we snapped a quick photo, and I let 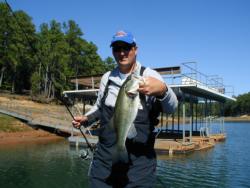 her go. About 10 minutes later, another nice bass grabbed the herring-colored chub, and I figured that maybe I was onto something. If the weather during the tournament would be sunny and flat, I was pretty confident that I could come back into some of these small pockets and grind out a few nice fish by running this pattern.

The day wore on, and eventually Scott and I found ourselves back near Spring Creek. We had looked at the map and discovered a series of small, sharp points that were essentially main-lake points. Each point had good hydrilla growth along their ends and short, bare pockets between the points.

Since the sun was beginning to get low in the sky and a very slight breeze had picked up, we went back to power-fishing with the spinnerbaits. I used a half-ounce pearl-colored Lil’ Hustler with copper blades and burned the bait along the grass edges. A big bass boiled on my spinnerbait and sucked it down. I fought the fish to the boat and quickly released her. I figure she weighed almost 4 pounds and was the biggest bass I’d caught yet. A few points later, Scott caught a solid 2 1/2-pound bass on the spinnerbait. We wrapped things up shortly after this and had a pretty productive day despite the post-front conditions and lack of wind. I only caught six or seven keepers today, but my best five fish would have gone a very respectable 10 or 11 pounds.

The final practice day was a continuation of the stable, sunny-weather pattern. The nights were cold, but the sky was cloudless and the sun would warm the day up quickly. We launched at Spring Creek and decided to check out some of the sharp little points that we left off on the evening before. These points featured very thick weedlines that dropped quickly into deeper water. I really had narrowed my bait selection down to just spinnerbaits at this point, so I had two on my deck, a 1/2-ounce model and a larger ¾-ounce size. Not long after starting, I had a boil on the 1/2-ounce Lil’ Hustler and hooked a big 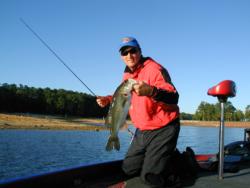 bass. It pulled hard and darted into a wall of hydrilla, but I was able to steer her out and eventually land her. The fish was big, maybe 4 1/2 pounds and bigger than anything I’d seen all week.

I fished fast down this section of points and pockets and noticed there was nobody else fishing this water. More keepers soon came, all on the larger spinnerbait. I was walking the big blade along the weed edges, and the fish were just killing it. I quickly boated a limit, and Scott added a few of his own. In about an hour’s fishing time, we had nine or 10 solid keepers, and I was quite certain I had found my starting spot. I had long since taken the trailer hook off of my spinnerbait, but the fish were all getting hooked anyway; they were really eating the bait. There was more water to fish in this area, but I didn’t want to sting any more bass, so we pulled out and went looking for similar places, trying to expand the pattern.

We never really found the same mixture of sharp, grassy points that were main-lake and fell quickly into deep water. It seemed the farther we got into the creeks, the less bass we would catch. The rest of the day was fairly uneventful. The spinnerbait bite slowed down with the bright sunshine and lack of wind. I found a few fish willing to take a Gambler Ace or the Netters Chub, flipped into thick weed pockets, but these bass were small – barely keepers. I was pretty happy with my morning flurry of bites and totally committed to the spinnerbait pattern I had discovered. If the weather would hold steady, I felt very confident that I would have a top finish. My best five keepers weighed about 14 pounds, and this was far and away my best practice day.

We pulled off the water around 6 p.m. and headed over to have dinner with fellow pro Von Kinsey and his wife, Renee. They had rented a house right on the water in one of the major creeks on Clarks Hill. We grilled steaks and had an old-fashioned, home-cooked feast. It was the best we’d eaten in several 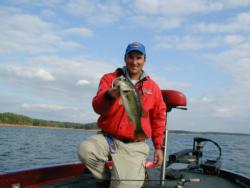 days, and we stayed late into the night. Practice was over, and the following day was a mandatory off-limits day.

Scott and I used the day to prepare our tackle and get the boat ready for the first competition day. We took time out to meet Von and Renee again at the nearby Cracker Barrel to have a late breakfast. We stopped by the workshop of the Buckeye Lure Company to have some custom spinnerbaits made up. The shop was loaded with anglers doing the same and included Bassmaster pros Boyd Duckett and Gerald Swindle, who were in town to fish this final FLW Series event of the regular season.

The registration and banquet went smoothly, and there were no surprises this time around. The only difficulty that anglers would need to deal with involved the tournament launch site. Wildwood Park was closed to boat launching by the Army Corp of Engineers due to the low water. Thus, anglers would need to find alternate launch facilities and then drive over by boat in the dark to Wildwood Park for takeoff. FLW would delay the sendoff until 8 a.m. to allow time for boats to get launched and cross the lake for takeoff. I would draw out boat No. 109 and be fishing with Jacques Fleishman, an FLW co-angler regular from Missouri.

Editor’s note: Stay tuned for Part 3, in which Andrews will write about the beginning of competition at the FLW Series tourney at Clarks Hill Lake.