Okeechobee springs to life with seven limits over 20 pounds 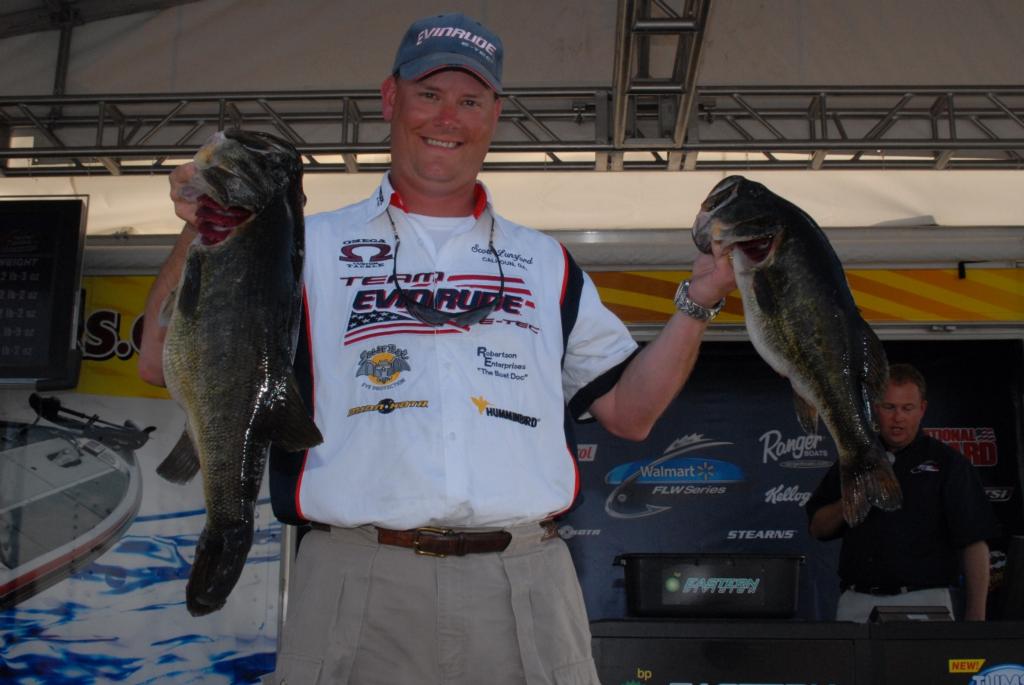 CLEWISTON, Fla. – If you have ever wondered how Florida bass fisheries function in the wintertime, let the 2009 Walmart FLW Series BP Eastern event on Lake Okeechobee serve as a standard lesson called Florida Bass Fishing 101.

Fast forward five days, jack up the daytime temperatures to around 80, warm Okeechobee’s shallows some 15 degrees, bring a new moon into the equation and, kaboom, the bassing bomb goes off. Big O bass move into the shallows, making beds by the hundreds, and suddenly it’s like a completely different lake, which is exactly what happened today. 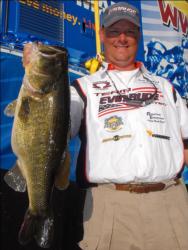 In all, seven limits crossed the stage busting the 20-pound barrier. Behind those, another five limits topped the 19-pound mark.

Scott Lunsford of Calhoun, Ga., lit the Big O fuse today with a leading limit of 25 pounds, 15 ounces. His catch included the Big Bass of the day weighing in at 10 pounds, 3 ounces worth $500.

While other leaders owned up to catching spawning bass, Lunsford is convinced his bass are prespawn bass that have not moved onto beds.

“I’m fishing in a way that no one else around me is fishing,” Lunsford said. “The only problem with the way I’m fishing is that I’m losing a lot of fish, but that’s just part of the technique. It’s a reaction bite in the thickest, nastiest stuff you could ever imagine. I’m using 60-pound braided line and still losing fish.”

Lunsford actually found his fish 25 days ago before the official cutoff period. He found five areas and only visited two of them today.

“I’m keying on something very specific, and when I see it, I know it,” he added. “All five of my places have the same key ingredients. These fish have been in these places for a long time now, and I don’t think they’re going anywhere.” 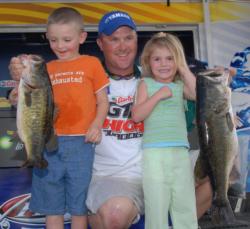 David Dudley of Lynchburg, Va., was the first pro to weigh in today, and when he dropped 23 pounds, 15 ounces into the scales, he sent a clear signal to the weigh-in crowd that Okeechobee’s fishing had taken a sudden turn for the better.

Dudley’s second-place limit included a 9-14 kicker, which is the biggest bass the Castrol pro has ever caught.

“They’re definitely moving up,” Dudley said. “I caught some blind-pitching into holes in the grass and some actually sight-fishing. In fact, I broke that big one off once before I caught her.”

Dudley noted that he has no plans of conserving or managing fish in his area.

“I’m going to catch as many and as much as I can because they are moving up so good. If it was going to get cold or something, I might go a little easier on them. But with the long-term weather forecast calling for warm weather, I’m going to catch all I can get because I feel like more will move up right behind them.”

Kellogg’s pro Dave Lefebre of Union City, Pa., brought in 22 pounds even to start the event 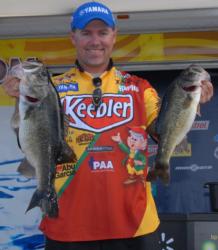 Lefebre is sight-fishing his bigger bass and says he has a couple of other big fish located that he is saving for tomorrow.

“I’ve got one about 9 or 10 pounds – the biggest fish I’ve ever seen on bed – that I did not catch today,” he said. “I probably could have caught her if I worked at it, but I just decided to leave her for tomorrow. The male is a 4-pounder, and I knew if I caught either one of them, the other one might leave. I already had 20 pounds in the well, and I just decided to take a chance and leave them. If they hang around and I can catch both tomorrow, that’s about 13 pounds in two fish – that would be a great start to the day.”

Combs is catching spawning bass, but he is not sight-fishing.

“I’m drifting with the wind and making long casts with flukes and topwaters to areas where I’ve seen beds,” Combs said. “They seem to bite better when you’re not right up on top of them.”

Combs noted that his area seems to be replenishing with fish as well.

“Going in there this morning, I saw a lot of empty beds,” he said. “But on the way out this afternoon, those beds had fish on them, so I’m pretty fired up about getting back out there tomorrow.” 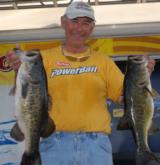 Rounding out the top 10 pros in the FLW Series Eastern on Lake Okeechobee after day one:

Last year’s FLW Series co-angler champion on Lake Okeechobee, Robert Wood of Jupiter, Fla., is in the hunt for a repeat performance.

Wood fished behind pro Fred Martin and weighed in five bass for 17 pounds, 11 ounces to start the event in second place.

“Long casts with soft plastics and topwaters were the key for us,” Wood said.

Larry Mullikin of Lauderhill, Fla., rounds out the top five with 15 pounds, 10 ounces.

Al Odom of Chapin, S.C., caught the big bass in the Co-angler Division on day one weighing 8 pounds, 7 ounces worth $333.

Rounding out the top 10 co-anglers in the FLW Series Eastern on Lake Okeechobee after day one: