Lake Erie proved to be a fickle animal at stop No. 1 on the 2009 FLW Walleye Tour. After a cancellation on day one, the lake slowly began to stabilize. The warmer and clearer the water got, the more the bite improved. Veteran pro Pat Byle got some Lake Erie revenge and took home a long overdue first victory. Overall, the pickings were slim. Erie never showed her true colors as only one 40-pound stringer was recorded. Much of the same can be said on the pundit side of the equation.

For those new to the feature, log on to FLWOutdoors.com the Friday before each FLW Walleye Tour event to see who the so-called experts like in the upcoming contest. We can’t promise accuracy, we can’t promise precision, but we can promise a little good-natured pretournament trash talking. The competition will pit pros v. staff throughout the season to see who qualifies for the pundit championship. After three regular-season events, each pundit will be seeded according to their record for the playoff round. Only three pundits advance from the playoff round to the championship, a winner-take-all affair that goes to the person who accumulates the most points.

In his pundit debut, FLWOutdoors.com reporter Vince Meyer was throttled 564 to 458 by veteran Pro Division pundit Rick LaCourse. LaCourse’s 564 was the highest score registered by any of the six pundits. The 1997 PWT Championship winner only had one pick in the top 10, but was steady all the way around. Sharon Reynolds had third-place pro Rick Franklin in her picks but the rest of her roster stunk worse than a pound of dead leeches. She fell to second-year pundit Jason Kerr 499 to 336. Lastly, the Staff Division did manage one victory, as I out-dueled Eric Olson 431 to 383. It wasn’t pretty, but a win is a win and I’ll gladly take it. But one tournament does not a season make. Just ask any veteran, it’s not where you start, it’s where you finish.

Last thing, the disclaimer: The picks in this column in no way represent any sort of favoritism on the part of FLW Outdoors staff or its pro anglers. These are merely guesses – only arguably educated – as to who we think might do well at any given tournament. With that in mind, here are the picks. Enjoy.

Up next is a visit with an old friend – the mighty Mississippi. Pools 3, 4 and 5 of the river have been a 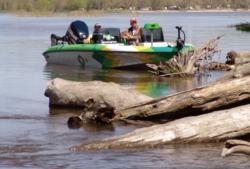 frequent host to the FLW Walleye Tour. In 2006, Jeff Ryan put on an impressive live-bait rigging display in the Vermillion River. The following year BP pro Jason Przekurat won his first tour-level event with a four-day weight of 89 pounds, 15 ounces. Przekurat not only surpassed Ryan’s total, he also set the Tour’s margin-of-victory record, winning the tournament by an astonishing 20 pounds, 13 ounces. All of his fish came from a small area in Pool 4 called Katrina. Both Katrina and the Vermillion River are little honeyholes, two of approximately 20 areas where the big females traditionally stage after spawning. The trick is deciphering which of these areas will be holding fish based on the current conditions. In addition to fishing post-spawn locales with live-bait rigs such as bottom bouncers and three ways, many anglers will troll crankbaits with leadcore in an effort to cover water. Others will jig shorelines with plastics or probe the deeper water for saugers in Lake Pepin. Overall, the fish should be aggressive – having completed the annual reproduction cycle and in search for an easy meal.