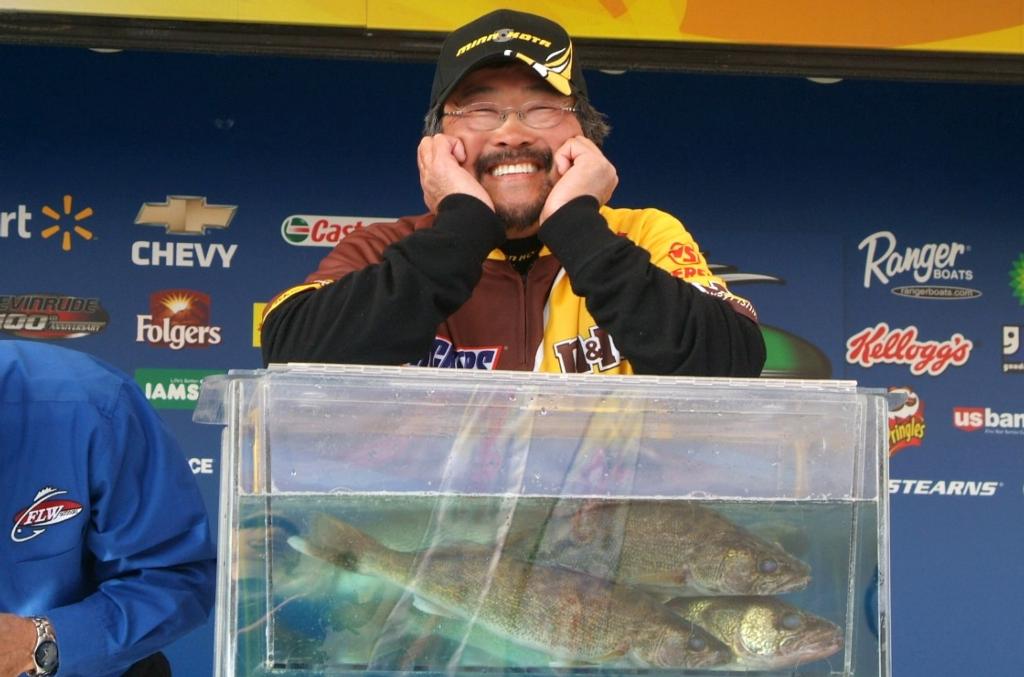 RED WING, Minn. – In practice, Ted Takasaki found an area on the south side of Lake Pepin where he could quickly gather a 15-pound limit of fat saugers. This was step one in developing a winning game plan at the Walmart FLW Walleye Tour event on the Mississippi River. From there, Takasaki had three spots in his livewell saved for big fish.

According to the rules, tournament anglers were allowed to keep eight fish and weigh their best five. Upgrading wasn’t permitted, so the common strategy among the finalists was to collect five keepers and then go hog hunting.

Takasaki accumulated his limit by trolling crankbaits with leadcore line. He started at the Bay City flats and then moved to where the river dumps into Lake Pepin. He then fished the east side of Long Point, then Deer Island. His final stop was what he termed DQ Point, because the Lake City, Minn., Dairy

Queen is right in the background.

“I basically hit all my spots going down, and then I’d try Pig Point on the way back up,” said Takasaki. “Long Point was the best place for getting the saugers.”

His favorite cranks were No. 7 Shad Raps and No. 5 Wally Divers. When he was going against the current, he would troll them at 1.6 to 1.7 mph. When he was moving with the current, he trolled at 3.5 mph. His best colors were “hot olive” and “orange gold,” and he used a 15-pound Power Pro leader with his leadcore.

With five in the livewell, he would work for big fish by using bottom bouncers and Lindy rigs with half a night crawler and a Lindy snow float. Of the 20 walleyes he weighed over the course of the tournament, only five of them came by rigging. But his three best were caught by rigging yesterday, as were his two biggest today. His main rigging area was DQ Point, which was in roughly 20 feet of 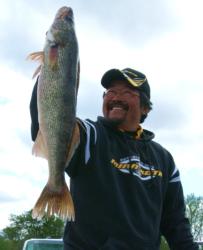 When Takasaki rigged, he used his bow mount Minn Kota Terrova and plodded along at .6 to 1 mph.

“Trolling up the saugers early gave me the confidence to go after big fish. This river has always been tough on me. This feeling, if you could bottle it and sell it, it would be worth a million dollars.”

Although his PWT accolades are many – from the all-time heaviest five-fish stringer (53 pounds) to winning the 1995 Top Gun award and the 1998 championship – Takasaki had yet to taste victory on the FLW side, which he began fishing exclusively in 2005.

In 2006, the East Gull Lake, Minn., native fished a flawless tournament at Green Bay for three days. He t 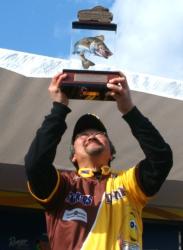 ook a 13-pound lead into the final day of competition only to lose to Wayne Butz by just over a pound. In 2008, he finished second at the Lake Sharpe qualifier and eighth at the Walleye Tour Championship on the Missouri River in Bismarck, N.D.

For most of the 2008 season, he led the Land O’Lakes Angler of the Year race. At the final qualifier of the season on Bays de Noc, Takasaki lost several key fish and saw the title go to another legend – Pete Harsh. Amid all this success was frustration, but the veteran never lost confidence in his ability to close.

“I was a little worried, and, to be honest, it was in the back of my mind. I just didn’t want to make any mental or tactical mistakes. After all the second places I’ve had, this gives me a great sense of accomplishment.”

While day four saw a much tougher bite due to post-front conditions, Takasaki executed when it mattered most. His 20-pound, 11-ounce limit brought his total weight to 93 pounds, 5 ounces, which superseded both Jason Przekurat’s winning weight from 2007 as well as Jeff Ryan’s from 2006. The 51-year-old president of Lindy Little Joe Inc. earned $33,333 for the win.

Pretournament favorite Nick Johnson decided to commit to the river and mainly fish for postspawn females. The strategy nearly worked as the Elmwood, Wis., native finished second with a total weight 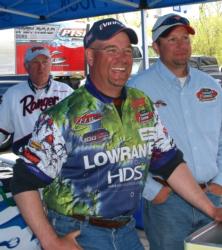 of 78 pounds, 12 ounces. Today he weighed a limit for 13-9. His 31-pound, 10-ounce limit on day one came from Pig Point, but the area couldn’t sustain the constant boat pressure.

“The bite was soft today; I couldn’t get the big ones, but we hung in there,” he said. “The lake has the numbers of fish, and with the lack of shad, they’re on the chew. I even tried the lake for a little bit today, which is rare.

“I thought I could do it in the river. I thought most of the field would be sucked in by the lake, and I could outfish the others in the river.”

In addition to Pig Point, Johnson spent some time in the Wisconsin channel. A runner and gunner by nature, he sampled a dozen spots per day in Pool 4. He mainly pulled three-way rigs with a 4- to 6-foot leader, a No. 4 hook and a night crawler.

Johnson took second here in 2007, fifth the year prior, and he won the 2004 Walleye Tour Championship downstream in the Quad Cities. Last season he also won the final PWT event held out of Hudson, Wis., on Pool 3 and the St. Croix River.

“In hindsight, I wouldn’t have done anything different.”

Stevens moves up to third 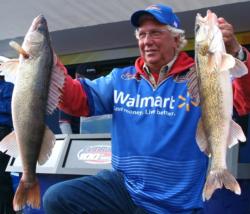 from sixth place to third. His four-day total weight was 75 pounds, 9 ounces, which earned him a check for $8,000 without contingencies. His downfall was day three, when he caught only three fish for 9-15.

“If I was going to win this, I knew I needed big fish,” said the Hager City, Wis., native. “I lost one sow, but that was it; I only got four bites today.”

The man known as River Rat Randy primarily fished two areas, the head of Lake Pepin and the Wisconsin channel. He used a combination of willow cats, night crawlers and leeches on three-way rigs. He would methodically troll specific spots within these areas at approximately .3 to .4 mph.

“We had to grind it out. At no time this week was it ever a hot bite for me. One of the reasons I only fished two spots is because I knew the other spots I wanted to go to already had boats on them.”

Pat Byle, the winner of the season-opening event on Lake Erie, notched his second consecutive top-10 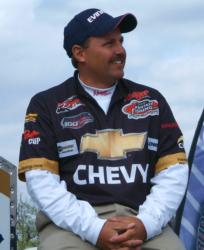 with a fourth-place finish on the Mississippi River. Byle started the day in eighth place, but moved up with a 16-pound, 7-ounce limit. His four-day total weight was 74 pounds, 10 ounces, which was worth $10,667.

“We just couldn’t get the big saugers going today,” said the Colgate, Wis., pro. “That was the difference; we got the kicker we were looking for and everything.”

Byle is a teammate of Takasaki, meaning the two practice together and share information. They also shared a few spots during the tournament, in particular the sauger area on the east side of Long Point and Pig Point. Today, Byle foul-hooked a 4-pound sauger that eventually came unbuttoned. On day two, he boated a 5-pound sauger, which is roughly the trophy equivalent of a 10-pound walleye.

Like many of the finalists, Byle eased three-way rigs through his big-fish spot. In his other areas, he mostly pulled crankbaits on leadcore line. Byle claims he hasn’t had success on this stretch of the river since his MWC days in the ’90s.

“I’m surprised to do this well. I took the approach that I wanted to catch a limit every day to stay in the Angler of the Year race, and I can’t believe it took me this far.” 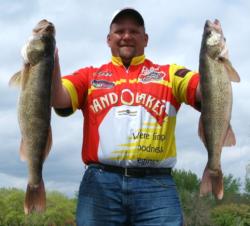 One small area in Pool 4 dominated the pretournament talk. That postspawn locale was Katrina, the site of Przekurat’s victory in 2007 and the Walleye League event that took place exactly one week ago. Although Katrina didn’t produce early on, it rallied on days three and four. And riding that hot bite was Fargo, N.D., pro Brian Bjorkman.

After catching only 11-6 and 9-15 on days one and two, Bjorkman caught 31-4 and 21-9 the final two days to bring his total weight to 74 pounds, 2 ounces. While all of his fish came from Katrina on day three, he had to scramble and troll up a sauger Saturday to get No. 5.

“Yesterday we had our five fish by 9:17 in the morning,” he said. “It was definitely an early bite.”

Today, Bjorkman lost a 7-pounder right at the boat and two others that came off one way or another.

Bjorkman said that although he struggled early in the tournament, the fish were always there. On day one a recreational boat was on the “spot on the spot” so nobody could fish it effectively.

“They just load up at night, and every morning there’s more fish. There’s a ledge in there that goes from 7 feet to 12 feet of water. The fish follow the seam in there at about 12 feet.”

Bjorkman used a 1-ounce slip-sinker and a 16-inch leader. His bait of choice was willow cats, but he also used bullheads.

“I held two rods in my hands and worked them up and down. That’s usually when I got bit – when they were moving and fluttering.”

Rounding out the top 10 pro finalists at the FLW Walleye Tour event on the Mississippi River:

Competition resumes June 10-13 for the third qualifying event of the 2009 FLW Walleye Tour season on Leech Lake in Walker, Minn.

Teammates Takasaki and Byle are neck and neck in the Land O’Lakes Angler of the Year race after two events. To date, Takasaki has accumulated 299 points while Byle has earned 297. Behind them is Good, another teammate with 286 points.