Land O’Lakes gets first Division I win in dominating fashion. PTSI back in winner’s circle in Division II 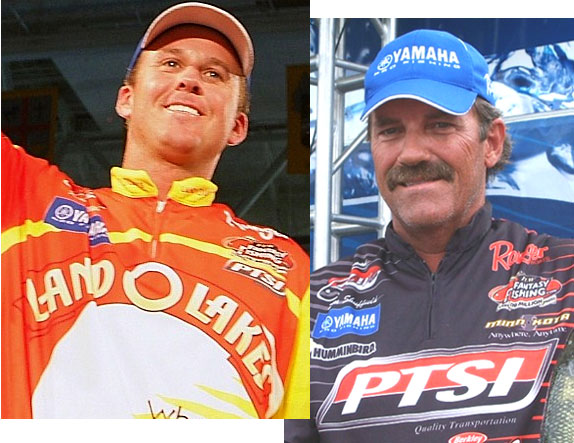 The Walmart FLW Tour returned to Kentucky and Barkley lakes in June to stage its fifth event of the 2009 season near FLW Outdoors headquarters in Benton, Ky. Though the surroundings were familiar, there were some surprising results in sponsor-team competition. Longtime Division I team Land O’Lakes blew away the competition en route to its first-ever win, while PTSI returned to form in Division II.

And surprise sprinkled with the familiar was a theme running through the June 11-14 tournament, the seventh time the Tour has visited Kentucky Lake in its 14-season history. Veteran Chevy pro Larry “The General” Nixon, who has never made the Kentucky cut in his dozen years of fishing on Tour, unexpectedly led the event for two days, while some of the past standouts on this fishery like David Dudley, David Fritts, Anthony Gagliardi and Gary Yamamoto bombed. Then again, local David Young and Terry Bolton, who used to call the fishery his home lake, saved some face for pundits by placing high.

For Land O’Lakes, the victory was more than a well-deserved and long-awaited reward, it was the pivotal moment of its 2009 season – launching them up the leaderboard – and a groundbreaking display of team angling. The 186.75-point average earned by the team was the highest on record for any Division I team in a single event.

For PTSI, Kentucky-Barkley provided the stage to put the team back in the spotlight. 2008’s reigning Division II champion, PTSI had not won an event this year until stop No. 5, where the strong 194-point victory lifted the team to the top of its divisional standings going into the final event of the season – Lake Champlain.

Like in years past, sponsor teams are divided into two divisions: Division I, comprising teams of three or more professional anglers, and Division II, comprising teams of fewer than three pros. Keep tabs on your favorite teams’ progress as they compete this week, July 9-12, in the sixth and final FLW Tour stop of the 2009 regular, being held on Lake Champlain in Plattsburgh, N.Y.

Look for results from Champlain later this month. Results from Kentucky-Barkley, as well as an explanation of team scoring, are detailed below:

One of the FLW Tour’s most loyal and oldest sponsors, Land O’Lakes is held in high regard in the world of professional tournament bass fishing as the title sponsor of the vaunted Angler of the Year award. Each year the bass pro who amasses the most points on Tour is crowned champion by Land O’Lakes.

Despite that distinction, Land O’Lakes has had trouble remaining consistent as a sponsor team, never having notched a win in unofficial team competition on the Tour. But all that changed at Kentucky and

Barkley lakes, where the Land O’Lakes fishing machine hit the water with all cylinders firing efficiently. Pro Keith Williams of Conway, Ark., picked up his first FLW Tour win at Kentucky-Barkley, powering the way to a win for his team as well; Ott Defoe of Knoxville, Tenn., also had a great finish for Land O’Lakes, netting an eighth-place finish; and Jeremiah Kindy of Benton, Ark., and Aaron McManaway of Altamont, Ill., each delivered big points for the team with 19th- and 29th-place finishes, respectively.

If not for Land O’Lakes’ incredible 187-point win, Team Kellogg’s might have won its second straight event in Division I competition. The 151.20 points averaged by Kellogg’s pros – 16th-place Dave Lefebre of Union City, Pa., the best among them – was still a strong effort and enough to keep the team on top of the overall leaderboard.

With only one event left in sponsor-team competition, Kellogg’s now enjoys a 38.50-point lead in the standings over Team Chevy, now less than 22 points ahead of No. 3 Land O’Lakes.

PTSI’s commendable 194-point win at Kentucky-Barkley helped it overcome a 54-point deficit to unseat Team Folgers at the top of the Division II leaderboard. Manning the wheel as PTSI cruised to another win was pro Ron Shuffield of Bismarck, Ark., who landed impressively in seventh place. PTSI is now 34 points ahead of Folgers and a whopping 90 points ahead of No. 3 Team Walmart.

But upsets and massive point swings aren’t uncommon in Division I. PTSI need look no further than its

own history to realize it best keep the pedal to the metal all the way to the finish line if it intends to repeat its championship run in Division I.

Last year, PTSI came from way behind – 148 points – to steal the seasonal crown from Walmart in the final stretch, where PTSI won the event and Walmart stumbled dramatically in the final moments of the 2008 season. Whether Walmart will vindicate itself at Lake Champlain, or any other team will scale the ladder to take victory away from PTSI, remains to be seen. But there’s little doubt the Chevy Open, taking place this week, will bring an exciting conclusion to sponsor-team competition in 2009.

Sponsor teams competed in the most recent FLW Tour tournament at Kentucky-Barkley lakes near Benton, Ky., and results from that event have been tallied:

Division I – Kentucky-Barkley (teams with three or more anglers)