Brauer brings it to the Hill 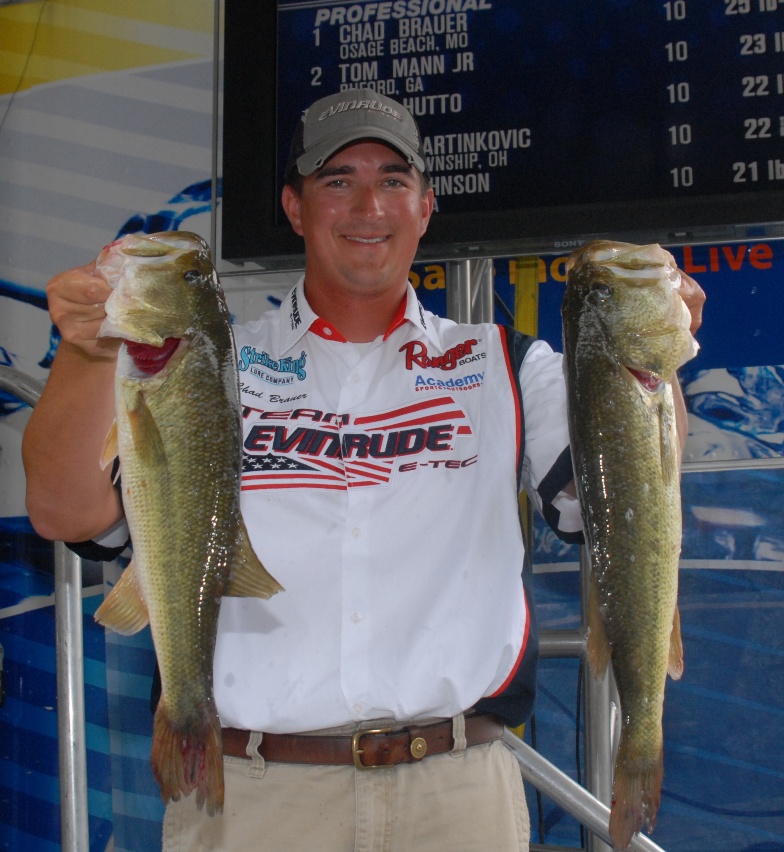 APPLING, Ga. – There was an interesting shift in the leaderboard after the day-two weigh-in Thursday afternoon of the Walmart FLW Series tournament on Clarks Hill.

Despite overcast conditions this morning, the grass bite seemed to wane a bit while those familiar with Clarks Hill’s deeper haunts began to creep up through the standings.

Chad Brauer of Osage Beach, Mo., took the overall lead, backing up his 13-pound, 2-ounce limit from day one with 12 pounds, 9 ounces today for a two-day total of 25 pounds, 11 ounces. His limit today included two big bass that were very skinny, weighing in at 5-2 and 4-9.

Brauer is totally focusing on grass, but just behind him is a group of pros who are beginning to figure out the deep bite a little more each day.

Brauer is the son of legendary pro Denny Brauer, one of the greatest flippers and pitchers on Earth, which would lead one to assume Chad is snaring his Clarks Hill bass on the long pole. But the younger Brauer is remaining quiet about his technique. The silence is understandable as he noted he has several other competitors in his primary area.

What Brauer would give up, however, is that his bass are coming from grass on three different baits. He got just five bites today and lost one bass he estimates would have helped his weight by another half a pound.

“I definitely think it’s an area deal,” Brauer said. “I narrowed down my areas a little more today in terms of what I’m looking for specifically. I think there are a lot more fish in these areas, but they just seem to be very lethargic – not real active at all – so it’s a real grind to get a bite.”

Matthew Wilbanks of Gainesville, Ga., brought in the biggest limit of the day, weighing in at 13 pounds, 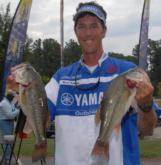 5 ounces, to move into second with a two-day total of 24 pounds even.

Wilbanks is starting each day up shallow in the grass to catch a few keepers to “calm the nerves,” but then he heads out for the riskier, deeper waters, where he is rolling the dice with herring-oriented fish that are either feast or famine. And today the feast was on.

Wilbanks offers an explanation for that.

“The way I see it, there are two types of bait here: threadfin shad and blue-back herring,” he explained. “The bass in the grass are eating threadfin, which live shallower but don’t provide as much protein. The herring live out deeper and are richer in protein, therefore bass eating those herring are remarkably fatter.”

But here’s the catch, so to speak: The deeper, herring-oriented bass are much harder to catch.

“And that’s the problem,” Wilbanks continued. “Day in and day out, those shallow grass fish are probably much more reliable, but they’re skinny. The deeper herring bass are fatter, but trying to make them bite out there in 20 and 25 feet of water will drive you crazy. Today I got fortunate and got a few of them to bite.”

Like Wilbanks, Mann is also from Lake Lanier and they are both in the top five. Coincidence? Hardly. Even though Lake Lanier is known for its spotted bass population, it, too, has blue-back herring, and the way the blue-backs behave in both Lanier and Clarks Hill are very similar.

“I prefished here five days, and every time I went to the bank, all I caught was long, skinny fish,” Mann said. “So I decided to commit out deep and fish the way I fish back home at Lanier – offshore in 15 to 25 feet of water.

“During practice I found about 15 to 20 places out there, and those are the only places I’m fishing each day. I pull up on each one and make five or six throws, and if I don’t get a bite, I go to the next one. When I reach the end of my milk run, I go back to my first place and start over and run them all again. At some point during the day, I eventually run across them feeding and can get a few bites in row.”

Hutto is bouncing back and forth between shallow and deep places, but his local knowledge is really allowing him to score out deep where it counts.

“As a local angler, I’d actually like to see it get hot and sunny with a little bit of wind,” Hutto said. “That would help position my fish a little better while taking away the advantage that cloud cover is giving the shallow-water guys.”

Chris Martinkovic of Liberty Township, Ohio, rounds out the top five pros with a two-day total of 22 pounds, 8 ounces.

Rounding out the top 10 pros in the Walmart FLW Series BP Eastern on Clarks Hill after day two:

Bart Blackburn of North Augusta, S.C., leads the Co-angler Division of the FLW Series event on Clarks Hill with a two-day total of 15 pounds, 12 ounces.

Fresh off an FLW Series win at Lake Dardanelle, the red-hot Alan Hults of Gautier, Miss., has now moved into second place at Clarks Hill with a two-day total of 15 pounds, 2 ounces.

Larry Mullikin of Lauderhill, Fla., is in third place with a two-day total of 14 pounds, 4 ounces thanks in large part to catching the Folgers Big Bass on day two weighing 5 pounds, 1 ounce worth $302.

Day-one leader Bob Blackerby of Chelsea, Ala., is in fourth place with a two-day total of 13 pounds, 6 ounces.

Team BP co-angler Kevin Koone of Greenbrier, Ark., rounds out the top five with a two-day total of 12 pounds, 11 ounces.

Rounding out the top 10 co-anglers in the Walmart FLW Series BP Eastern on Clarks Hill after day two:

Day three of the FLW Series Eastern on Clarks Hill will begin Friday at 7 a.m. at Wildwood Park locate at 6212 Holloway Road in Appling.