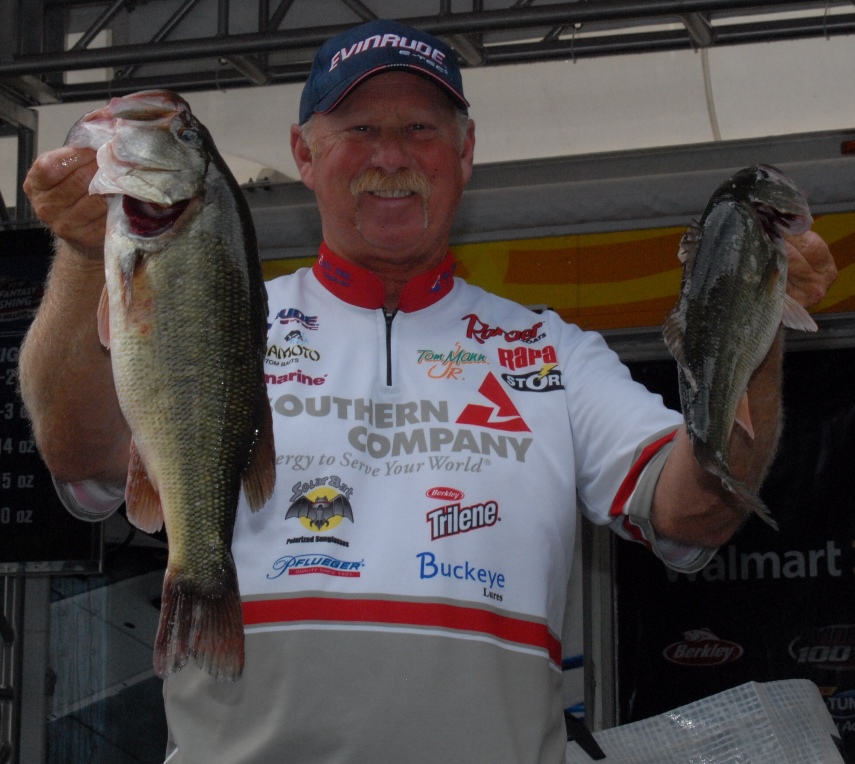 APPLING, Ga. – When Tom Mann, Jr., of Buford, Ga., heard that the 2010 Forrest Wood Cup was going to be held on his home lake, Lake Lanier near Atlanta, he doubled up his efforts on trying to qualify for the event through the 2009 Walmart FLW Series.

He has put extra time into pre-practicing at some of the venues this year and it has paid off big time with a top-10 finish at Okeechobee, Eufaula and now he has taken the lead after day three at Clarks Hill going into the final round.

Mann checked in the biggest limit of the day – 13 pounds, 3 ounces – to move into first with a three-day total of 36 pounds, 9 ounces.

Ironically Mann is using his many years of fishing experience on Lanier here at Clarks Hill.

“I came here and pre-practiced five days,” Mann said. “I spent a lot of time looking for offshore structure like I would look for at Lanier – mostly rock and brush and some grass. In all I found about 20 different spots, all offshore in anywhere from 25 to 25 feet of water. And each day I just run those 20 spots.”

Today Mann went until high noon before he caught his first keeper and then rallied with five more keepers, allowing him to cull once.

Mann is still keeping his key bait close to the vest, but noted that very little wind helps him tremendously in being able to line up his casts and make the right presentation to his deeper spots.

“Once it slicked off a little this afternoon I was able to pinpoint my casts a lot better and I think that made a huge difference in getting the fish to bite,” he said. “If it would get sunny and calm tomorrow I might just be able to win this thing.”

With so many close calls this year, including a fifth at Okeechobee and a second at Eufaula, there is little doubt that Junior, as he affectionately called on Tour by his peers, is due for a win.

Chris Martinkovic of Liberty Township, Ohio, has moved up steadily through the rankings this week with double-digit catches each day to grab second place after day three with a total of 34 pounds, 6 ounces.

Martinkovic is basically fishing one schooling hole, spending the entire fishing day there waiting for the fish to get active. He is using one lure – a Zoom Fluke – and working real fast on the surface to get the fish to react.

“Wind as been a key for me,” he said. “This schooling spot is situated around a shallow shoal that has hydrilla on it. When the east wind blows up on that shoal, it pushes shad up there and the fish start coming up. The first two days they busted on the surface; today they did not come to the surface, but they were still feeding underneath.”

Interestingly, Martinkovic pointed out that the fish are eating shad – small shad – as opposed to blue-back herring. 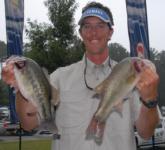 Matthew Wilbanks of Gainesville, Ga., holds down the third place position with a three-day total of 32 pounds, 9 ounces.

Wilbanks slipped off his pace just a bit today, bringing in 8 pounds, 9 ounces, but noted that he lost three decent fish, including one over 3 pounds.

He is alternating between a shallow grass pattern way up north in the morning and a deep-water, offshore pattern late in the afternoon. Today he lost the biggest fish in the shallow grass and snared two keepers before heading south and finishing out his limit on deep-water fish.

“The problem is my two primary areas are 35 miles apart so I can’t bounce back and forth between them like I would like to,” he said. “Once I leave the shallow water up north I’m committed to the deep-water pattern, which is a bit riskier in terms of number of bites.”

Local pro Craig Johnson of Martinez, Ga., has moved up to the fourth place position with a three-day total of 31 pounds, even.

With his local experience, Johnson is focusing totally on schools of bass that are feeding on blue-back herring over deep water.

“Yesterday my fish spit up so many big herring in my livewell that it clogged up my livewell drains,” Johnson said.

Johnson is not necessarily fishing over structure, but instead idles around over deep main river breaks looking for large clouds of herring on his depthfinder.

“Once I see a big cloud of bait, I mark it on the GPS and fire a lure back where I saw them,” he said. “I’m burning a Buckeye spinnerbait, a Zoom Fluke and using a Lucky Craft Gunfish to catch the suspended bass.”

If Johnson can get a school ignited, he said the bite is on for about 5 to 10 minutes.

“Once you hook up and reel a couple of bass to the boat, it scatters the school out and the bite completely dies,” he added. “Then I have to let it rest an hour or so before the bait gathers back up and the fish get under them again.” 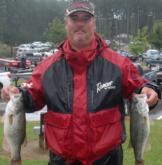 Another local pro, Keith Hutto of Evans, Ga., rounds out the top five with a three-day total of 30 pounds, 9 ounces.

Hutto knows the schooling bite on Clarks Hill as well and is targeting his schoolers with a Zoom Fluke and Sebile Magic swimmer.

Rounding out the top-10 pros in the FLW Series BP Eastern on Clarks Hill who will fish on Saturday:

Day four of the FLW Series BP Eastern on Clarks Hill will begin Saturday at 7 a.m. at Wildwood Park locate at 6212 Holloway Road in Appling..