Mann on a mission 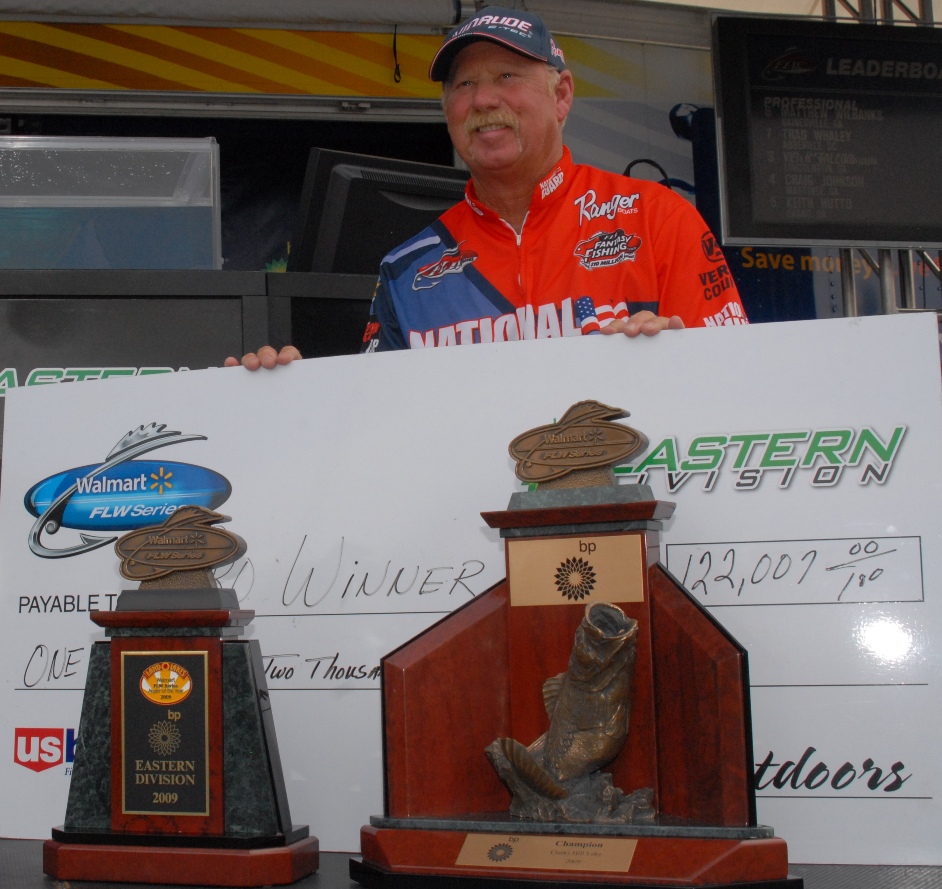 Tom Mann, Jr., displays the Clarks Hill winning loot: the winner’s check and trophy and a 2009 BP Eastern Angler of the Year trophy, which serves as his ticket to the 2010 Forrest Wood Cup to be held on his home lake, Lanier. Photo by Rob Newell. Angler: Tom Mann Jr.
September 19, 2009 • Rob Newell • Uncategorized

After all, when the only bass tournament on Earth that pays a potential $1 million to the winner makes a stop on your home lake, you do not want to miss out.

So at the beginning of the 2009 season, Mann made a concerted effort to add fuel to the competitive fires by putting in extra time on the water and prepracticing all the FLW Series events.

And the overtime has paid off handsomely.

He started the season with a fifth-place finish at Lake Okeechobee, then headed to Lake Eufaula, where he finished second. He recently took 67th at Dardanelle.

He was sixth place in the BP Eastern Division points coming into Clarks Hill, and with the top 20 receiving a berth to the Forrest Wood Cup, he had plenty of breathing room for qualifying.

But Mann was not about to rest on his laurels. He wanted a front row seat to the big show in Atlanta next summer, and he put an exclamation point on his qualification today by winning the fourth and final BP Eastern event on Clarks Hill. And with that win he also became the 2009 Land O’Lakes Angler of the Year by a single point in the Eastern Division, accumulating a total of 729 points for the season.

What started out as determination to make the Forrest Wood Cup at the beginning of the season has turned into a huge boon for Mann. Including his $122,000 victory today, Mann has banked $192,000 on the FLW Series this season alone.

“Man, this feels awesome,” Mann said after his win. “I don’t know what to say. Everything just fell into place this week. I knew what I was looking for when I came here because of my experience with blue-backs at Lanier. I just had a flawless week. I landed every fish that bit except for one. You can’t ask for much more than that.”

During the week Mann focused on bass that were positioned on the tips of points and shoals on the main lake – bass that were awaiting blue-back herring to come swimming by up above.

“During my five days of prepractice and four days of practice, I isolated about 20 different places where a point or shoal broke off into the deepest water available. And all of these fish were sitting out in about 15 to 25 feet of water, right on the tips of those breaks. My casts had to perfect to come across that strike zone where these wolf packs of bass were waiting to ambush blue-backs. It’s a scenario that’s very similar to the way I fish back home on Lanier, so I had a lot of confidence in what I was doing.”

On the first day, Mann was able to score the bulk of his limit on a Rapala Skitterwalk in a rainbow-trout color. He also caught a couple of keepers on a ¼-ounce Buckeye Spot Remover tipped with a green-pumpkin Yamamoto cuttail worm.

But over the last three days, Mann’s fish quit breaking the surface and he resorted to a double-Fluke rig, which is essentially two Zoom Super Flukes (white) rigged in tandem, with one leader being a few inches shorter than the other.

“I’m telling you the biggest thing about blue-back herring is they are lightning fast,” he continued. “If a bait just kind of lumbers along, bass are not going to touch it. But the faster a bait moves, the more it looks like a fleeing blue-back and the more likely a bass is to bite it.”

Another big bonus to the double-Fluke rig was it allowed Mann to catch doubles, which Mann did four times during the tournament. That’s four extra keepers that Mann probably would not have caught otherwise, because once a fish is hooked, it tends to pull the whole wolf pack off the point and the bite dies immediately.

“A lot of people probably think I was throwing the double-Fluke rig just to catch two fish at a time,” Mann said. “Ironically, that was not the reason. The main reason was to keep the baits down so I could reel them faster. Being able to catch two at a time just happened to be an incidental bonus.”

As for the double rig, Mann used 17-pound-test Berkley 100% Fluorocarbon for both the leaders and main line. His Skitterwalk was fished on 15-pound Trilene monofilament and the Spot Remover on 8-pound-test 100% Berkley Fluorocarbon line.

With his Forrest Wood Cup ticket punched early, Mann has nearly 10 months to prepare for what will undoubtedly be the biggest tournament of his entire 25-year fishing career. 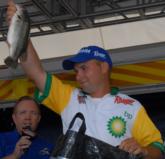 Chris Martinkovic of Liberty Township, Ohio, finished runner-up with a four-day total of 39 pounds, 14 ounces worth $48,503.

Martinkovic essentially spent the entire week working a shoal in the Little Georgia River with a Zoom Super-Fluke in glimmer-blue.

The shoal was home to a school of bass, and Martinkovic patrolled the area, patiently waiting for the fish to come up over 10 to 30 feet of water.

“They just did not school today like I hoped they would,” Martinkovic said of his three-fish catch today. “I broke one off and then had another completely jump out of the water to get the bait, and I missed it.”

Keith Williamson of Lincolnton, Ga., finished third after rallying from seventh with a 9-pound, 2-ounce limit today. His four-day total came to 39 pounds, 4 ounces worth $38,803.

Johnson also targeted schooling fish during the week in water 20 to 50 feet deep.

His main lures included a ¼-ounce Buckeye spinnerbait in fire-cracker, a Lucky Craft Gunfish and Zoom Super Fluke in white-ice.

“I lost a couple of good ones today,” Johnson said. “But what really hurt me was that my timing and position was just a tick off everywhere I went. And timing is everything with this kind of fishing – you have to be in casting range when they come up. And they came up several times when I was not quite in the right position to take advantage of it.”

Like others in the top five, Hutto also relied on a Zoom Super Fluke (glimmer-blue) to catch schooling fish this week.

“Four of us in the top five were all rotating around roughly on the same 15 or 20 places,” Hutto said. “They’re all key places where the bass set up to ambush those blue-backs.”

Rounding out the top 10 pros in the Walmart FLW Series BP Eastern on Clarks Hill: