Deliverance on the Delta 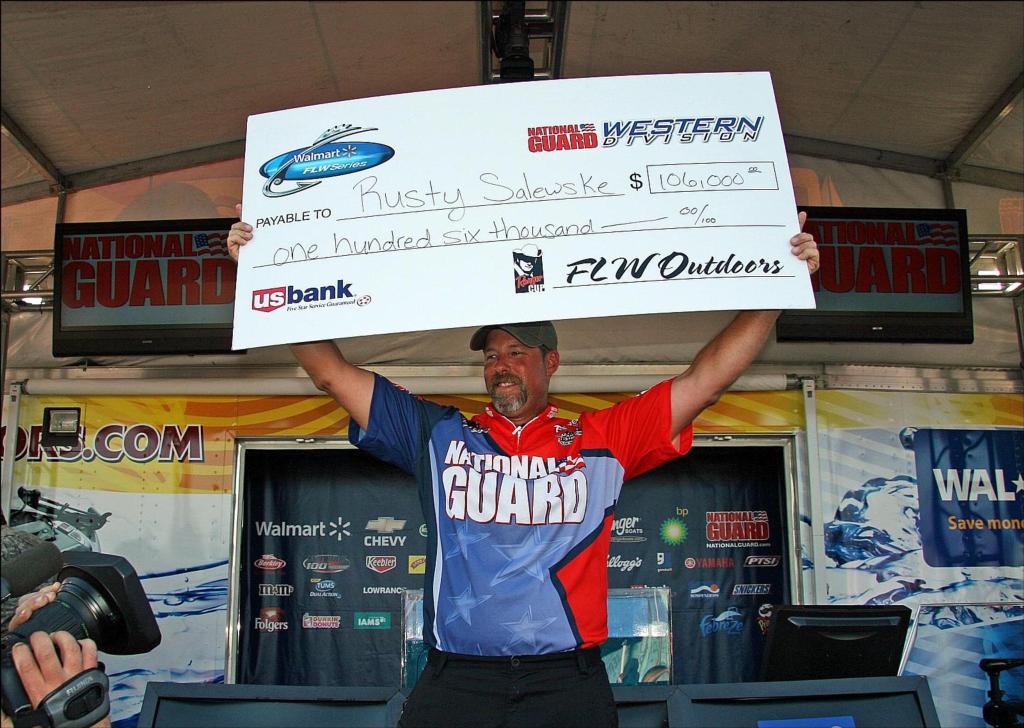 OAKLEY, Calif. – In a tournament of rocket rides and roller coasters, Rusty Salewske’s steady consistency overcame tough conditions and secured his much-awaited affirmation with a Walmart FLW Series victory at the National Guard Western Division event on the California Delta.

A lingering heat wave pushed daytime temperatures into the upper 90s, with the final round seeing 100-plus. On top of this, the quarter-moon phase delivered slow tides, so the current dynamics that Delta bass anglers depend on were lackluster. With limits each day of the event, Salewske weighed 17 pounds, 13 ounces for eighth place on day one, followed with 22-14 on day two and took over the lead. On day three, Salewske added 14-5 and 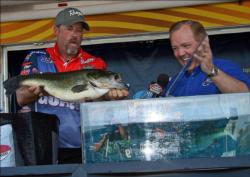 slipped back to second.

The Alpine, Calif., pro capped his performance with a final-round bag weighing 20-5 for a tournament total of 75-5 worth more than $106,000. That day-four limit included an 8-pound, 11-ounce show-stopper.

“This is something I’ve always wanted to do to make myself believe that I can fish with these guys and win,” an emotional Salewske said.

Salewske caught the majority of his fish while punching vegetation with a green-pumpkin Reaction Innovations Sweet Beaver rigged with a 1 ½-ounce weight. The heavy rig is intended to intrude upon bass resting within shady pockets.

“It’s a reaction bite,” Salewske said. “The bait comes zipping by them, and they have to decide: get out of the way or bite it.”

One of his final-round fish came on a ChatterBait-style lure from Phoenix Jigs.

“I usually put a Speed Worm on the (Phoenix jig), but this time I ran out, so I put a Beaver on it,” Salewske said. “It doesn’t really matter – you just need something back there wiggling.” 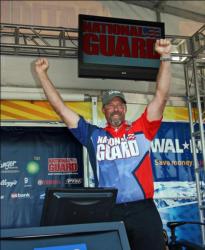 Describing his day, Salewske said: “It started off kind of scary. It was about 9, and I had two little ones. I was thinking about leaving my area where all my big ones had come from (this week), but I had to fish this one little strip one last time. I was almost to the end of it with one good little piece of grass left. I flipped the bait in there, and that big fish nearly yanked the rod out of my hand.

Salewske said he found his most consistent action on isolated points with current, where the biggest fish positioned for ambush feeding. Interestingly, some of his top areas produced multiple fish from nearly the same exact spot.

“I know every clump of grass in the area I fished,” Salewske said. “It even got to where I could see where I had caught a fish because the top of the grass was blown out. Ten different times, I’d see one of those clumps, throw in there and get another one out of there.” 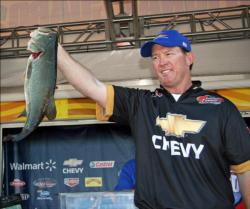 day one, Weyer got off to a strong start with a third-place limit weighing 24-7. The next day, his early flight kept him from the afternoon bite he had leveraged on the first day, and Weyer dropped to fourth after bagging just 11-9. Good fortune returned on day three, as he sacked up 22-5 and took over the top spot in the Pro Division. In fairness, day four was hardly a washout – Weyer caught a solid limit weighing 16-7, with one over 7 pounds in the sack. Nevertheless, his 74-pound, 12-ounce tournament total was just 10 ounces short of the win, so second was his final placement, earning him $40,874.

Weyer caught all of his tournament fish by punching weeds with a Sweet Beaver in the California-420 color on a 4/0 hook. He rigged with 1 3/8- and 1 ¾-ounce Penetrator weights and added homemade skirts that match the bait color.

“The key was keeping that trolling motor on 1,” Weyer said. “While everyone else was flying down their banks, I was methodically hitting every single little piece of cover." 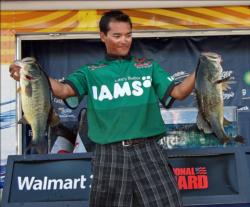 It’s unlikely that Chris Zaldain of San Jose, Calif., will intentionally miss any more practice days any time soon. Packing up early before this event hurt him badly, and he was very candid about that fact.

“We had four days of practice, and I thought I only needed two days. I went out the first and second day, caught them really good and ended up going home. I said, ‘I’ll go out on Wednesday and whack ‘em.’”

Humility arrived in the form of a meager limit weighing just 9 pounds, 2 ounces. To his credit, Zaldain quickly got himself dialed in and came back the next day with a whopping 24 pounds, 6 ounces – the biggest sack of day two. That second-round catch rocketed Zaldain up the standings to eighth place. He followed that with 19-5 on day three and reached the final round in seventh. Zaldain completed his campaign with a day-four limit that weighed 20-8. He ended the show with a third place total of 73-5 worth $32,699.

Describing the tournament as “a flipping derby,” Zaldain said he focused on outside weedlines and followed the tide as it rose. He positioned his boat in 10 to 12 feet of water and flipped into 4 feet. Points with current were most productive. Zaldain caught his fish on brown and purple Sweet Beavers rigged with 1 ¼- and 1 ½-ounce weights.

Mah makes a move to fourth

Ken Mah will never forget the number five – specifically, the fifth fish that never made it to his day-three 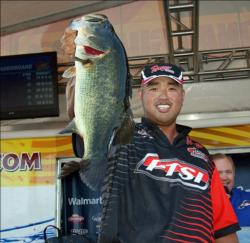 bag. On that day, the Elk Grove, Calif., pro caught four keepers that weighed 18 pounds, 13 ounces. With that kind of average, the tournament win could very well have been within reach. However, despite a strong final-round effort of 18 pounds, Mah settled for fourth with 71-0 and a $24,525 paycheck.

Taking advantage of cooler morning temperatures and the low incoming tide, Mah went after the topwater bite and grabbed two good fish early. Once the day heated up, he picked up his flipping rod and went to work on grass growing along riprap shorelines. His bait of choice was a Strike King Space Monkey in green-pumpkin with a Paycheck Punch Skirt. Mah altered the green-pumpkin skirt with some red skirt material to match the bright-red crawfish abundant in the grass.

Switching from heavy cover to grass and fishing slowly were the keys to Mah’s success.

“I had heard a lot of guys talking about how funny the bass were eating the baits, so I took my ounce and a half weight off and put an ounce on. It’s a lot of work, but it makes you slow down. I didn’t lose as many, because I think they got it better.”

Hite flips and chatters for fifth 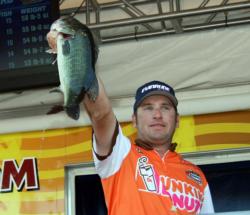 In practice, Phoenix pro Brett Hite found a pattern that was very similar to the one he fished to win the Walmart FLW Series National Guard Western Division event in spring 2008. Working in secluded canals with no traffic, he fished a green-pumpkin ChatterBait-style lure from Phoenix Jigs with a matching Yamamoto Swimming Senko trailer. Hite also flipped a Yamamoto Flappin Hog on the lower tide stages and switched to the Phoenix jig when the water level allowed bass to patrol the outside grass edges for the abundant forage it held.

“I saw what they did in practice,” Hite said. “As the tide got up, they’d start cruising that grass looking for bluegill and shad.”