Looking for the knock-out ‘punch’ 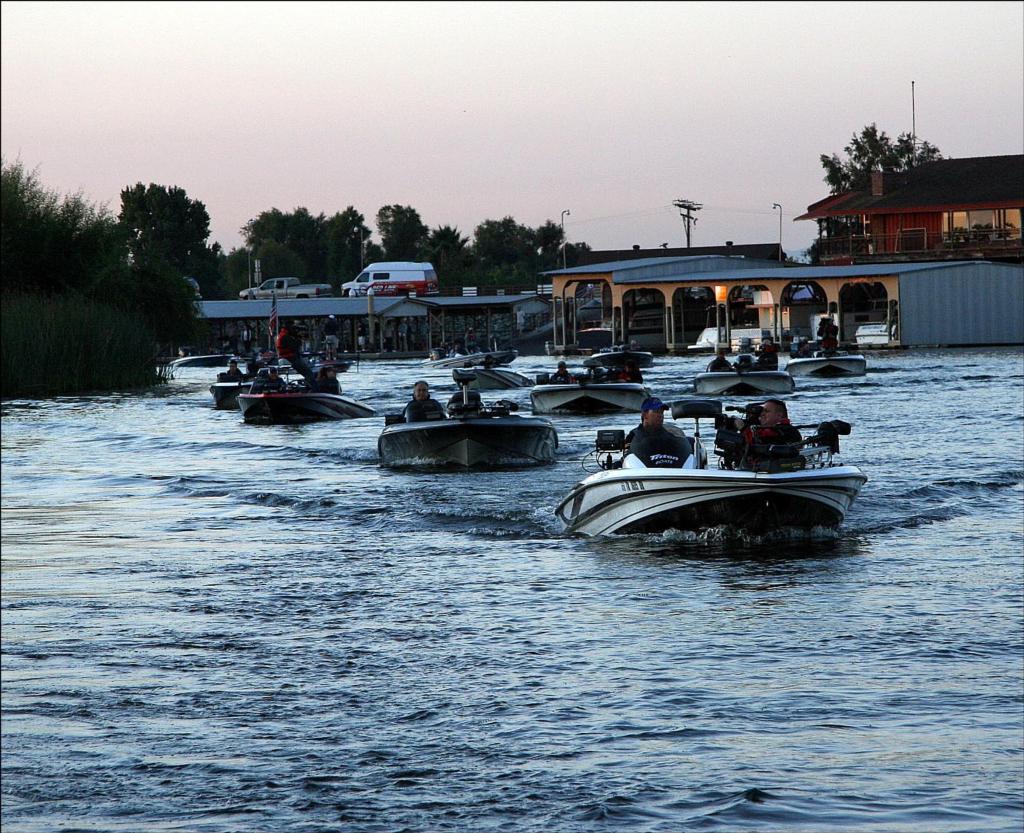 The top-10 pros head out of Russo's Marina for their final round of Delta competition. Photo by David A. Brown.
Walmart FLW Series finalists will spend their day probing shady Delta cover
September 26, 2009 • David A. Brown • Uncategorized

OAKLEY, Calif. – They’ll get no break from the sun and minimal assistance from the tide, but that’s nothing new for the top 10 finalists in the FLW Series National Guard Western Division event on the California Delta.

More hot, still conditions will make for a physically tough day on the water, while the tide schedule is merely academic. The quarter moon phase has brought sluggish tides all week and today’s movement is no exception. Anglers will start fishing at the beginning of the incoming tide and will work with rising water all day. The problem is that their 2:30 check-in takes them off the water before the outgoing cycle gains momentum.

Current in either direction benefits fishing by positioning baitfish and predators and by washing cooler, oxygenated water through an area. Anglers have caught fish on incoming and outgoing cycles, but the switch from high to low typically offers better opportunities by pulling fish to the outside edges of vegetation. High water allows bass to work their way far into the back reaches of weed mats where they are hard to reach and even harder to pull out when they bite.

Regardless, the day’s hot conditions will once again send the fish under the shady cover of thick 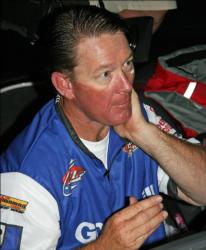 vegetation by mid-morning. Topwater plugs, buzzbaits and frogs may tempt some early fish, but anglers have been reporting lackluster surface strikes in which bass lazily roll beneath baits, but rarely bite with any level of serious intent. The majority of today’s fishing effort will come via flipping and/or punching weeds.

Lee and most other anglers dress their flipping and punching baits with skirts like those made by FLW competitor Bub Tosh’s Paycheck Baits. Fifth place pro Ricky Shabazz explains the benefit: “The 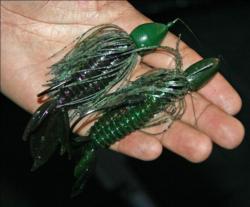 crawdads are in the grass and bass love those crawdads. When the punch skirt comes through the grass, it flares up and looks like a crawdad. It also comes through the muck better than a jig or a punch bait without a skirt. About 95 percent of the time, it will come through clean so you don’t have to stop and remove grass from your bait.”

Phoenix pro Brett Hite has been flipping and throwing the same Phoenix chatterbait that he used during his Delta victory in 2008. He’ll probably throw that bait later in the day, after a thorough flipping program. “The fish that I’m keying on are eating bluegill or bigger shad. I’m targeting areas where there’s a lot of (forage) and hydrilla grass. When the tide gets high over that grass, that’s when the chatterbait produces. During the lower tide stages, I’m flipping with a Yamamoto Flappin Hog.”

Ken Mah of Elk Grove, Calif. sits in sixth place with 53 pounds, but he’s the only top-10 competitor who missed his limit on day three. He weighed 18-13 with just four fish, so if he can get back on the quality and boat five today, he’ll be competitive.

Mah said he would throw a topwater plug, a frog and maybe a swimbait early, but he’s committed to 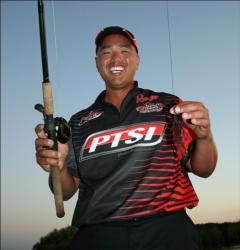 working the percentages with his down baits. “I’m going to pick up a flipping stick around 9 a.m. and I won’t put it down until weigh-in. Yesterday was just a grind. I had seven keeper bites and caught four of them. I’m not getting a lot of bites and I don’t anticipate that that’s going to change.”

Mah’s outlook: “If I catch 19 pounds, I think I’ll have an outside chance, but if I can catch 22-25, that will give me a really good chance of winning.”

Leading the field with 58 pounds, 5 ounces, Charlie Weyer has caught most of his fish punching Sweet Beavers (California 420) on 4/0 hooks with 1 3/8- and 1 ¾-ounce Penetrator weights and homemade skirts. Although he would like to be able to fish the outgoing tide, he sees a benefit in the morning phase. With tide schedules advancing approximately one hour each day, the morning low occurred significantly earlier during the previous three days. That means today’s low will give Weyer a good look at his fishing area. 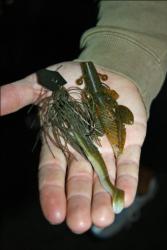 “The good thing about this morning’s low tide is that it will position the fish on the outside grass edges so I can see them and the grass beds I’m fishing,” he said. “Earlier in the week, I couldn’t see those – I was blind casting. Today, the tide will position them perfectly for me to just methodically go through there and pick them off.”

Of his chances today, Weyer said: “I had my 22-pound bag at 9 o’clock yesterday and they were still biting when I left. I came back and went back through that area and shook off four or five more just to see if they were going to come back in.

“I still have plenty of spots. I just hope the other local tournaments don’t mess them up. Hopefully, everyone backs off a little bit.”

Rusty Salewske of Alpine, Calif. trails the lead by 3 pounds, 5 ounces. Like Weyer, he found most of his fish early by punching weeds on the incoming tide. He also caught a weight fish on a chatterbait.

Saturday’s final weigh-in will be held at the Walmart store located at 4893 Lone Tree Way in Antioch, 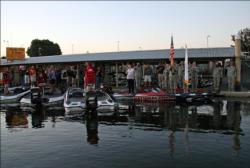 Children will also be treated to a Family Fun Zone prior to Saturday’s weigh-in at Walmart from noon to 4 p.m. Activities in the Family Fun Zone include a trout pond, a Ranger boat simulator and assorted fishing-themed games. All activities are free and open to the public.