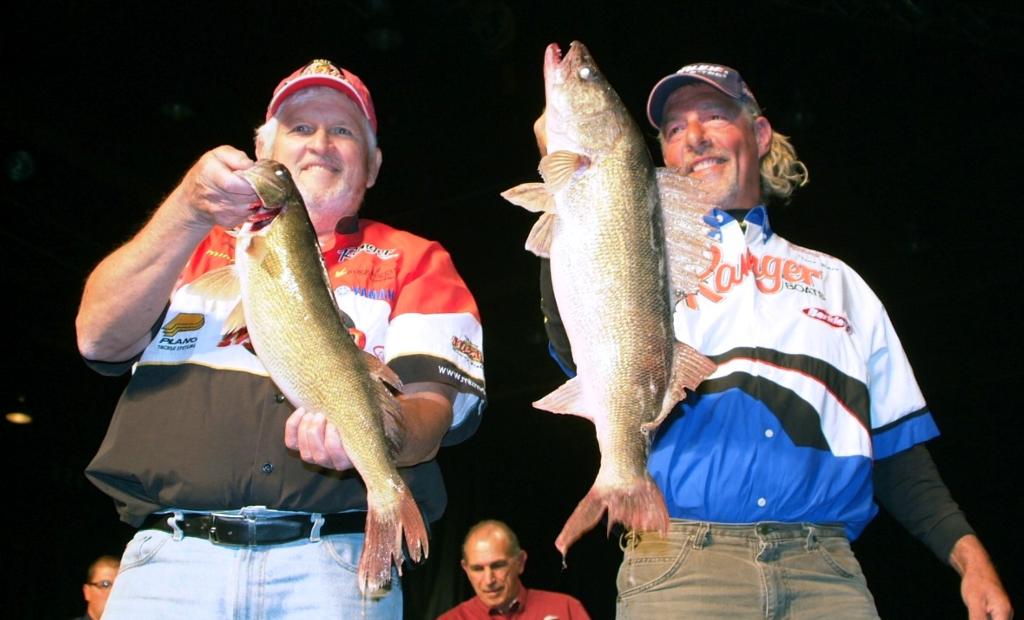 BISMARCK, N.D. – Windy doesn’t even begin to describe day one of the Walmart FLW Walleye Tour Championship on the Missouri River. Sustained 30-mph winds from the southeast confused both the fish and the anglers. But not even Mother Nature can stop Todd Riley, the hottest walleye fisherman on the planet.

When Riley brought 23 pounds, 4 ounces to the scale, jaws inside the Bismarck Civic Center dropped. Nobody expected a stringer like that, especially considering the brutally tough conditions. After Riley, the weights drop significantly, and the leaderboard is extremely tight.

The pro leader is coming off a victory at the inaugural AIM Championship on Lake Winnibigoshish in northern Minnesota. At last year’s FLW Walleye Tour Championship he finished sixth. On day two of that tournament, he brought an eerily similar 24-pound bag to the scale. 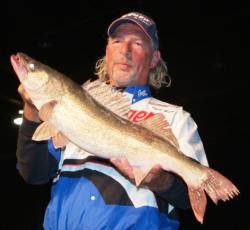 “My plan today was to not let any go, and it was so good this morning we actually let some go,” said Riley. “I was concerned about catching a limit of fish, as I am sure most of the guys were. We caught a couple fish early and in the right order. Once we had the foundation set, then we could get a little picky.”

Riley caught his fish last year near the North Dakota-South Dakota border. But he’s not saying where he caught his fish today. In fact, he wasn’t interested in talking much at all. Part of this is because a six-figure payday is on the line. But he also has an axe to grind with the Missouri River. In other words, the Amery, Wis., pro thought he was on the winning fish last year, only to finish just outside the top five.

“We were fortunate to get two big bites today,” added the modest Riley. “That was the difference.”

Those kickers weighed 9 pounds and 6 pounds.

“It was pretty intimidating, going out there today with the weather. The water was 2 feet higher at the landing this afternoon than it was this morning when we launched.

“Tomorrow is going to be completely different. Today the wind fought against the current, and tomorrow it is supposed to change. The current will be flying. More than likely, I’ll be fishing all new water.”

Riley said that with nearly an 8-pound lead, there is no reason to gamble. After all, the weights will be zeroed at the conclusion of tomorrow’s weigh-in.

“The goal tomorrow is to get five fish. I won’t be throwing any back.”

“It was just slow and steady,” said Brunz, who finished third at the 2006 FLW Walleye Tour Championship on the Missouri River. That event was held downstream in Pierre, S.D.

At 12:30 p.m., Brunz caught his sixth and biggest walleye, a 26-incher that weighed nearly 6 pounds. That fish replaced a 14-incher.

Ironically, Brunz was bummed yesterday when he caught a nearly identical 26-incher in the same spot.

“It was enough to convince me that was where I needed to start, but I never dreamed of catching another 26-incher.” 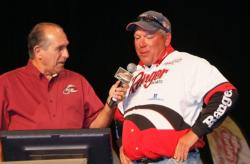 While most anglers struggled in the blustery weather, Brunz said he was sheltered some. The only problem he encountered was getting his baits fouled on debris. Tomorrow’s forecast is calling for a change in wind direction, and that is something Brunz welcomes.

“I think this spot could replenish if the flow is stronger. If the wind does switch, it should be ripping tomorrow. I say let it blow; I don’t care.”

At takeoff this morning, Tony Renner said his goal was to catch 15 pounds. With five walleyes weighing 15 pounds, 5 ounces, Renner exceeded his target and sits in third. The Hutchinson, Minn., angler said he stayed in the river and, more than likely, will do the same tomorrow.

“I don’t think I need to go to the lake, so I probably won’t,” said Renner. “I don’t want to spend all that time driving, and I honestly feel like it can be won in the river.”

Renner said his limit consisted of a 24-incher kicker and four 20-inchers.

“That’s what we were looking for; we probably threw back another 12 pounds. The wind was horrible out there, so we knew with 15 pounds we’d be right in it. We caught our five fish early, so we looked around but didn’t get any upgrade fish. But I did find another area with a lot of 17s and 18s.” 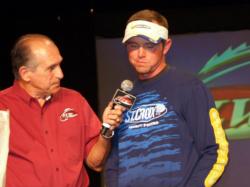 Minnesota Division Angler of the Year Toby Kvalevog is making the most of his first FLW Walleye Tour Championship appearance, having qualified through the FLW Walleye League. The Brainerd, Minn., physical education teacher caught a limit Wednesday weighing 14 pounds, 7 ounces.

Joining him in a tie for fourth place is Ron Seelhoff, the 1999 and 2000 PWT Championship winner, and Scott Steil, the winner of the 2008 Walleye Tour qualifier on Cass Lake.

Rounding out the top 10 pros after day one on the Missouri River:

Jimmy Cox of Bono, Ark., got to fish with Riley on day one, and he made the most of his opportunity – catching a limit weighing 23 pounds, 4 ounces. This is Cox’s fourth appearance in the Walleye Tour Championship. In 2006, he led going into the final day, only to finish second. He qualified this season by finishing 34th in the points race.

Day two of FLW Walleye Tour action on the Missouri River continues at Thursday’s takeoff, scheduled to take place at 8 a.m. Central time at Hazelton Launch Ramp, located 31 miles southeast of Bismarck, just off Highway 1804. After Thursday’s competition, the field will be trimmed to the top 10 pros and top 10 co-anglers.