Parsons takes over lead on Oahe 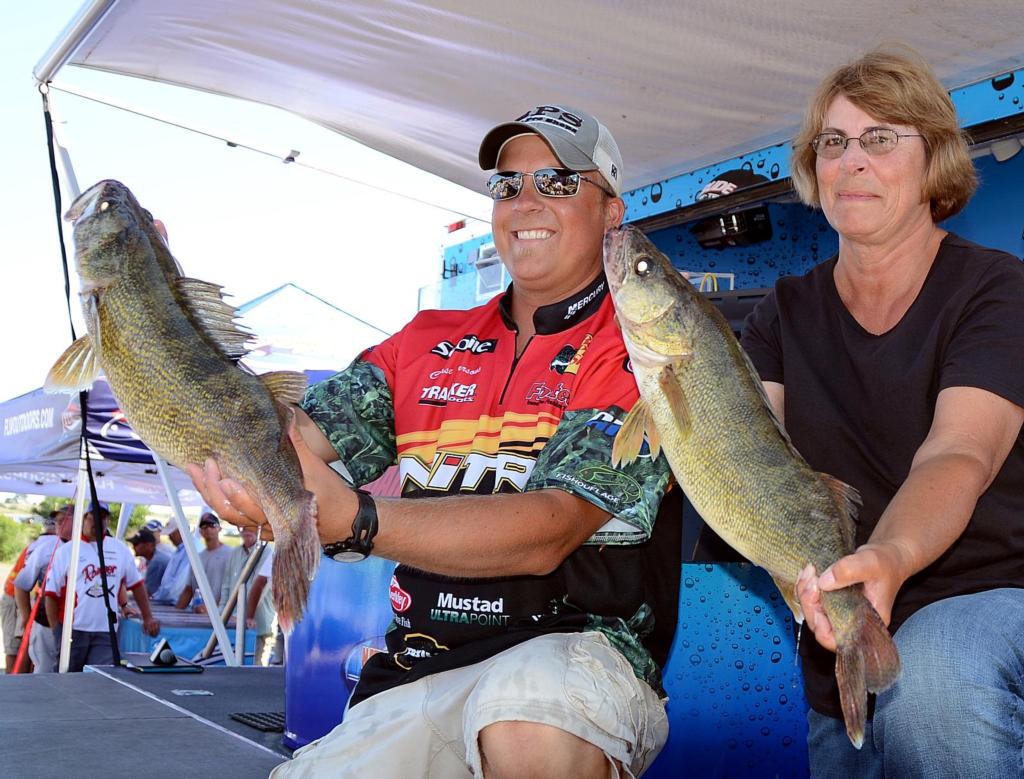 PIERRE, S.D. – Those who follow professional walleye fishing know the name Parsons: It is associated with great tournament finishes on bodies of water stretching from Lake Erie in the east to Keweenaw Waterway up north to as far south as Bull Shoals Lake and westward to Oahe. Usually the name in front of it in people’s minds is Gary, but on Friday his son Chase Parsons proved once again that he is a force to be reckoned with in his own right.

Fishing his first year as a pro on the National Guard FLW Walleye Tour, Chase Parsons entered the Oahe tourney ranked No. 4 among all pros after strong finishes on Lake Erie, Green Bay and Leech Lake earlier this season. After he weighed a stunning five-walleye limit Friday for 22 1/2 pounds (the heaviest sack so far this tournament), he positioned himself to improve on an already impressive tour debut with a two-day weight of 39-11 and first place heading into the final day.

“We’re south from (Spring Creek) where a lot of guys are fishing,” Parsons said. “I’m trolling over trees, but we’re doing something a little bit different than the rest of the guys.” 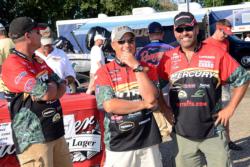 Kemos (6th) – all fellow walleye pros and Wiscosonites. The 27-year-old Parsons, who lives in Brillion, led the pack today, catching about 20 keepers and finishing his fishing day by 11 a.m.

“I’m confident this pattern will hold out,” said Parsons, who fished with local co-angler Flo Swank, who also made Friday’s top-10 cut. “If it gets slow for us, it’ll get slow for the others. We’ve just got to get the right bites in the right order; that’ll be the challenge tomorrow.”

Parsons is trolling crankbaits over trees like many other pros, but said his presentation is a bit “off the wall.” Otherwise, he credits his success today to managing his catches (a pro and co-angler may keep eight walleyes, weighing their best five, all of which must measure longer than 14 inches, but only two of which can measure over 20 inches; upgrading is not allowed, so a decision on whether to keep a walleye must be made right when it is caught).

“Yesterday, I had to throw some bigger ones back,” he said. “Today there were no decisions to be made. They came in the right order.” 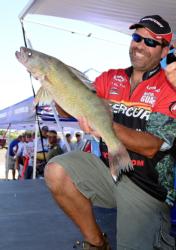 Kavajecz was outfished by his nephew today, but not by much. His five best walleyes weighed 21-2 for a two-day total of 38-12 and second place, just less than a pound out of the lead.

“We’re trolling over timber,” he said. “Trolling was a little slower today, but the fish were bigger.”

Kavajecz was fishing with a glut of competitors today near Peoria Flats, “bangin’ the trees” with crankbaits, and later near Sully’s. The Kaukauna, Wis., resident found his trees on his depth finder in water about 18 or 19 feet deep with the treetops about 5 feet below the surface.

“The biggest thing separating us from the rest right now is we are literally going through about 10 overs (walleyes over 20 inches) a day, so we’re really being patient,” he said. “We picked up some really good slots today too. We’ll stay patient tomorrow.”

Unless their patience in managing fish catches wears thin, either Parsons or Kavajecz could be difficult to beat tomorrow. 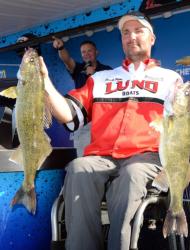 Peters stays in the hunt

The competitor who has the best shot at surpassing the top two Wisconsin walleye pros is Slayton, Minnesota’s Darrell Peters who guides on Lake Oahe in the summer. Today he couldn’t match his impressive 21-9 sack from day one that gave him the early lead, but he managed to weigh five walleyes at 14-13 for a total weight of 36-6 and third place.

“Today was absolutely horrible compared to yesterday,” said Peters, who finished second on day one on Oahe last year only to falter on day two. “We didn’t see a single slot fish (over 14 inches, but under 20) all day, so we settled for some 15-inchers … about 50 gallons of gas later.”

Yesterday Peters could do no wrong on a few of his spots between Okobojo Point and Little Bend, but when he stopped this morning at the spot where he caught his overs Thursday, there was nothing there. He went to his backup spot – nothing. Then he motored north about 20 miles to “a suspending spot” where he had targeted slot fish in practice, but still he came up empty.

After visiting a fifth spot, he finally caught a 21-incher sometime before 11 a.m. Then he followed it with another 21-incher, but he decided to gamble on a larger over to come later and threw it back. He then went looking for slot fish in three different areas he had marked, but only caught 14- and 15-inchers, which he threw back, before trying two more areas near Little Bend to little avail.

When he finally went back south to his primary area that hadn’t produced in the morning, he started catching fish on crankbaits right about the time the wind changed and started blowing from the south.

“We went back and my partner reeled in a 28-incher … saved my day,” Peters said, adding that they had to throw back a few more overs after that. 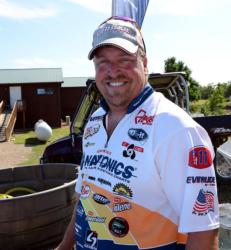 Peters is hopeful he can recapture some of his day-one magic in the finals tomorrow if the wind blows from the south.

Like Peters, pro Tommy Skarlis was displaced by the top two angler today, falling from second to fourth after weighing a 16-1 sack today for a two-day total of 35-9.

“I was fishing around a lot of these guys today (near Peoria Flats),” Skarlis said, “getting decent slots out of there today.”

Skarlis said he kept a 22-incher early in the day, a move that proved a bit too conservative as the day wore on.

“I found something late in the game out there in the middle … a couple different areas and I’m fishing them differently,” he said. “But they were a little late in coming, and I got a little spooked.”

Yesterday he reported catching all of his fish trolling a variety of crankbaits over trees like many of the other tournament leaders. However, today he thinks he learned something about what the bigger walleyes are keying on regarding submerged trees.

“You’ve got to move around to figure out where they are at,” he said. “But I firmly believe they move in on a group of trees – a certain kind.”

Skarlis is trolling fast, using his large Evinrude outboard and putting down his Minn Kota trolling motor for drag. Despite getting a little nervous about his pattern Friday, he is confident about his chances tomorrow. 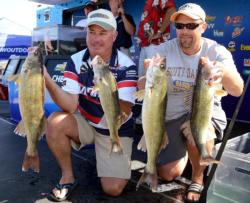 “I feel blessed to be fishing,” he said.

Another Wisconsin pro to make the cut today (one of six), Joe McCartin of Land O Lakes remained consistent, adding a five-fish limit weighing 17 1/2 pounds to his 17-6 from day one for a two-day total of 34-14 and fifth place.

“I’m fishing with the pack, doing something a little different,” he said.

He is “ticking the tops of the trees” with his crankbaits, and he has lost about 200 in doing so over the last two days. He is using Berkley FireLine to help pull the walleyes from the trees without breaking off and because it allows him to get his baits down deeper.

The key to his day-two success was catching “perfect slots.” McCartin said he is confident he can do well tomorrow if he catches his slot fish in the right order again.

Rounding out the top 10 pros who fish in the finals of the National Guard FLW Walleye Tour event on Lake Oahe: 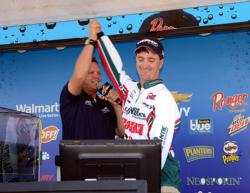 Solidifying his reputation as one of the best walleye pros of all time and as the most consistent pro in the history of the FLW Walleye Tour, Keenan’s ninth-place finish Friday paved the way to his third Angler of the Year title. For his National Guard-sponsored AOY win, he earned $10,000 and an automatic berth into the 2012 FLW Walleye Tour Championship. In addition to his AOY trophies, Keenan now boasts nearly $650,000 in earnings, 16 top-10 finishes and two wins in FLW competition.

“I’m a little light on words right now,” Keenan said after sealing the title with his top-10 finish. “It means a ton.”

Keenan said he set the goal of winning the 2011 National Guard FLW Walleye Tour Angler of the Year title after the second tourney of the year, and “it came true.”

“Realistically, I’ve been here for eight days and fished about 12 hours a day … sometimes I was the first guy to put in and the last to leave,” Keenan went on to say of the hard work that he puts into each tournament, helping him earn his third AOY title. “I’ve had great co-anglers and worked them all hard.” 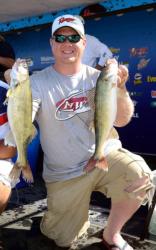 Christopher Hanson of New Hope, Minn., leads the Co-angler Division with a two-day weight of 34 pounds, 13 ounces. He fished with pro Gary Maher on Thursday for a 18-10 sack and followed that up with a five-walleye weight of 16-3 today while fishing with pro Paul Meleen, the 2010 Walleye Tour Angler of the Year.

“This is my fourth event this year, and it’s been a pretty down year for me,” Hanson said. “After placing third yesterday with Gary, I didn’t want to count my chickens before they hatched. But I’ve fished with Paul before … and he’s so intense and usually on the fish … I knew he could put me on fish.”

Hanson fished both south and north of Spring Creek yesterday, but focused on water to the north with Meleen today (Meleen finished the event in 14th place). They trolled shorelines, making multiple passes at speeds of up to 2.7 mph.

“We were cranking all day today … a little of everything,” he said of their bait choices, which included Berkley Flicker Shads and Rapala Shad Raps. 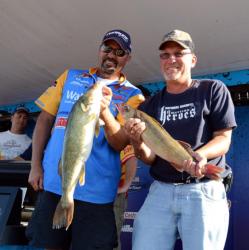 Pierre, S.D., co-angler Gary Kafka was in second place with a two-day total of 33-4 by the end of the day-two weigh-in. He registered a hefty 17-13 weight today after fishing with Walmart pro Dean Arnoldussen (7th).

“He is the most outstanding guy to fish with there is,” Kafka said of his day-two partner, with whom he trolled crankbaits over the tops of trees near Peoria Flats.

Also a local, Russell Somsen of Pierre ended the day in third place with a total weight of 32-12. He fished with fifth-place pro McCartin today for five walleyes weighing 17 1/2 pounds.

“Yesterday I had a real great day fishing with another local (Paul Steffen) who I’ve known all my life … and today Joe put me over the top, so it’s been some great draws,” Somsen said.

Rounding out the top 10 co-angler who will fish the final day of the National Guard FLW Walleye Tour event on Lake Oahe:

FLW Walleye Tour action resumes Saturday when the top 10 pros and 10 co-anglers take off from Spring Creek Resort & Deep Water Marina located at 28229 Spring Creek Place in Pierre at 7 a.m. Saturday’s final weigh-in will be held at the Walmart located at 1730 N. Garfield in Pierre beginning at 4 p.m. Prior to the final weigh-in, FLW Outdoors, in conjunction with the NPAA, will host a free Family Fishing Clinic, where children can receive free rod and reels plus other great giveaways. Fans will have the opportunity to interact with professional anglers, ride a Ranger boat simulator, enjoy interactive games and activities, and learn more about the sport of fishing. All activities are free and open to the public.

This week’s tournament is hosted by the Pierre Area Chamber of Commerce.