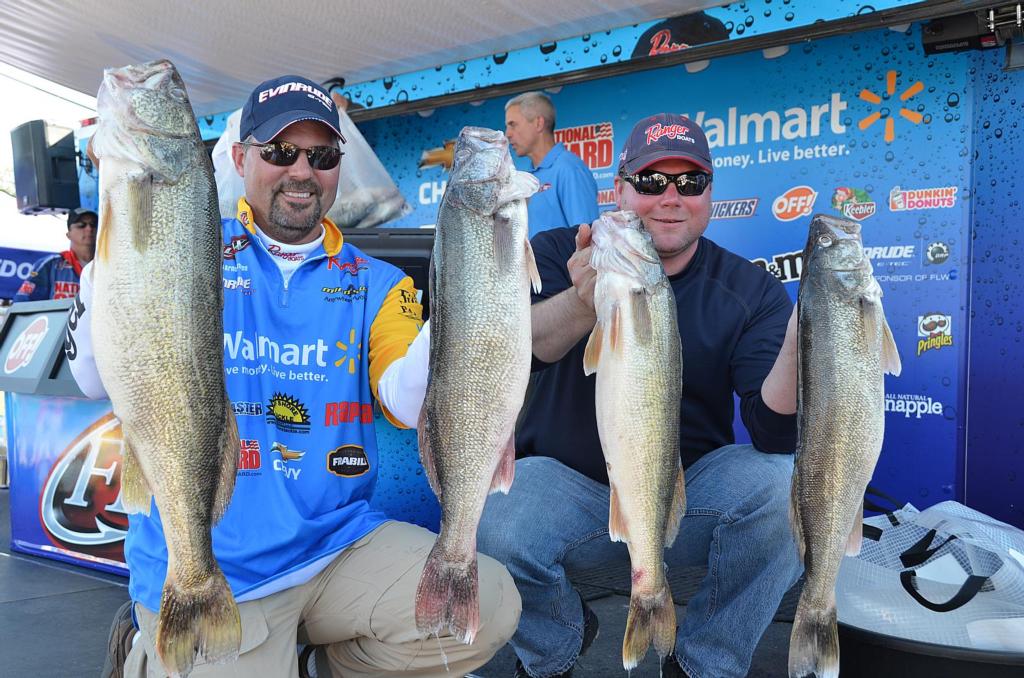 PORT CLINTON, Ohio – For a guy who has won two of his three tour titles off of Lake Erie, it was no surprise to see Walmart pro Dean Arnoldussen in the top 10 after day one. Going into day two the Appleton, Wis., native set to prove once again that he knows how to catch those Lake Erie giants. Arnoldussen brought the largest bag of the tournament so far, and the largest bag of his career, to the scales that sat at 45 pounds even. This brings his overall two-day total to a massive 82 pounds, 14 ounces giving him a 3 pound, 2 ounce lead for the final day.

“I fished the same spot that I did yesterday,” said Arnoldussen. “Only today we kept upgrading our fish on every single pass. Once I was satisfied, we left that spot to check some other areas and ended up catching a 29-incher.”

One of his keys is using the right equipment on his boat.

“My Humminbird electronics and LakeMaster chip really help me work the areas holding fish,” he said. “I match that with my engine-mounted Minn Kota electric motor, and it really helps give me the edge to catch those fish.”

The bite for Arnolduseen is pretty consistant throughout the day. Calm or windy, neither one does not seem to hurt the bite for him. Unlike other pros who struggle once the wind has died off over the past two days.

As far as technique goes there seems to be no real shock that Arnoldussen is pulling spinner rigs.

“I’m using Northland Holographic blades on my spinners,” he said. “They are by far the best blade on the market.”

He plans to fish his number one area tomorrow, and says it still has plenty of good fish in it. Though he does have a few other spots that are holding fish as well that he will go to if need be. 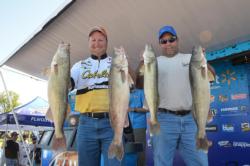 The Isle, Minn., pro Kevin McQuoid managed to move up the leader board a few spots thanks to a 40 pound, 13 ounce sack of walleyes – bringing his two-day total to 79 pounds, 12 ounces.

“It was a fast bite early this morning,” said McQuoid. “The wind definitely helps out with the bite. I had 38 pounds or so by 8a.m.”

Mcquoid left his main school of fish early to save them for tomorrow. He also will stick to the same game plan that has got him this far. That plan consists of pulling spinners over 30 feet of water.

McQuoid would love a two-foot chop on the lake tomorrow to really help him out. Though he seems pretty happy just to be where he is at the moment.

“Second place is a great place to be,” he said with a smile. 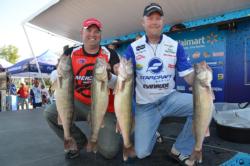 “While prefishing I was pulling 43- to 48-pounds off the same spot,” said Seiferlein. “I know they are still there, but a new wave of smaller fish has moved in. Other than that the bite was great until the wind laid down, after that I didn’t catch a fish.”

Seiferlein is fishing a longer stretch of a breakline. On that spot he has been using JT Custom Tackle blades on his spinner rigs, and is pulling them close to bottom.

“The weird thing is I hardly mark fish in this spot, but I know they are there,” he says. “I might mark a fish once in a while but it is pretty rare.”

Seiferlein might not mark fish on his primary spot, but he is confident they will be there for him tomorrow. 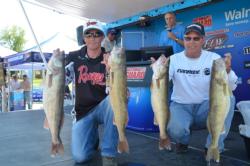 Though he did not fall far on the leader board, Ranger pro David Kleszyk of Oakbrook Terrace, Ill., still sits in good shape with a day-two bag of 35 pounds, 14 ounces. That catch brings his total for two days of fishing to 76 pounds, 9 ounces and keeps him in the top five.

“We had 30 pounds in the boat on our first pass of the morning,” said Kleszyk. “Then we trolled for 6 1/2 hours catching small ones, with a few upgrades.”

Kleszyk is one of those anglers who hopes for wind to help turn his fish on.

He plans to do the same thing tomorrow, fishing the same spot and pulling crawler harness’. 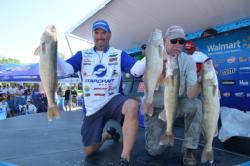 Local angler Greg Yarbrough of Port Clinton, Ohio, kept his fifth place spot with another good bag that weighed 37 pounds, 8 ounces that puts him at 76-4 for his overall total.

“My bag was a little better than I thought it would be,” said Yarbrough. “I only had 10 bites all day and six of those got in the boat.”

As most of the other competitors are, he is pulling spinner rigs. His spinner blades are a mix of Northland Tackle and JT Custom Tackle.

Yarbrough plans to use his knowledge of this vast water body to hang around one general area that is producing well for him.

Rounding out the top 10 pros from day two on Lake Erie: 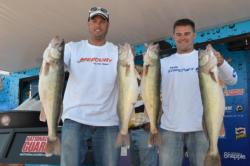 Yancey, who used to fish on the pro side, had to take some time off to deal with several stomach surgeries. He is recovering well and plans to fish as a co-angler for this season to help ease him back into the sport.

“It just feels good to be back on the water, and being in the lead isn’t bad either.”

Rounding out the top 10 co-anglers from day two on Lake Erie: 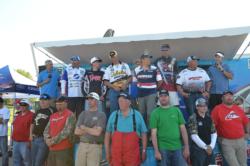