Plautz discusses his rock-spine pattern, his favorite crankbaits and winning the 2012 Walleye Championship 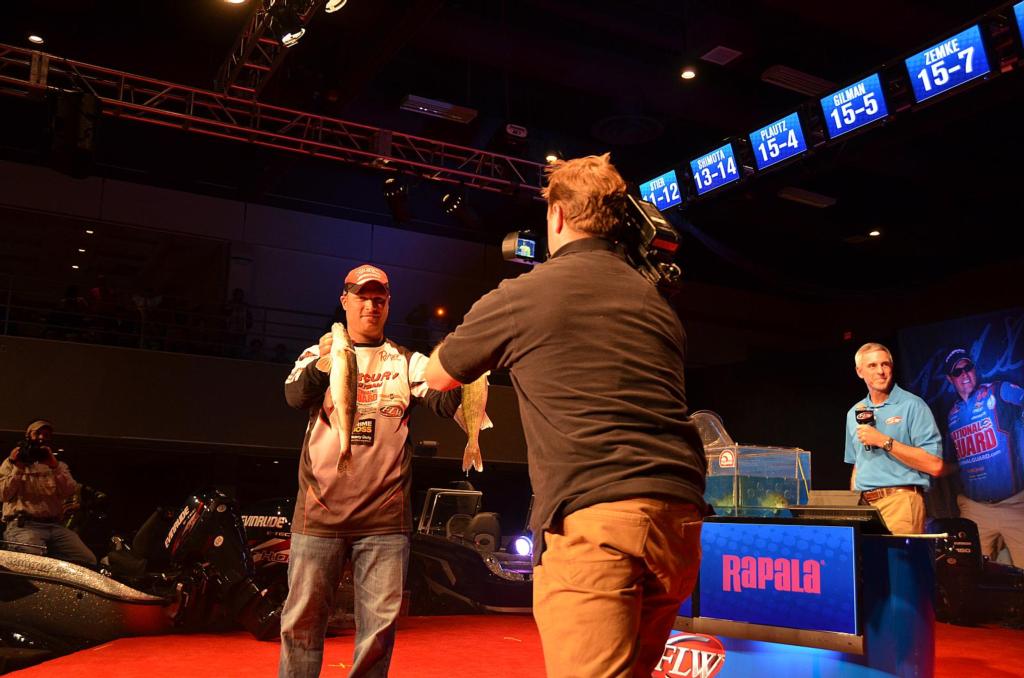 – MODERATOR COMMENT –
The event marked Plautz’s first FLW Walleye Tour win and pushed his career FLW earnings to nearly $163,000. In addition to his recent victory, Plautz also boasts four other top-10 FLW finishes including: an eighth-place result on Lake Oahe (2012), a third-place finish on Bays de Noc (2012), a runner-up finish on Green Bay (2011) and a second-place result on the Detroit River (2002).

– MODERATOR COMMENT –
Today, Plautz is here to take questions from you, the fans. So, without further delay, let’s get started.

Q: Why did you choose to cast crankbaits instead of trolling them?
— Nick (La Crosse, WI)
A: Well, the area was quite small. The spine that I was fishing was probably a little big longer than just a cast. It came down to the area not being very big. Most of the locals jig there; that’s how they get their fish. I thought maybe I could keep the bait in their zone longer by casting a crankbait. I wanted to avoid the snags too and using a crankbait instead of a jig really helped there.

Q: I remember your dad had a good championship at the Quad Cities back in 2004. Did his knowledge of the river have any impact on your victory?
— John T. (Burlington, IA)
A: No it didn’t. He targeted saugers and there was a lot more current back in 2004. The flow was normal at like 2 mph. The saugers positioned themselves on a break. With the lack of current we had this year, the walleyes and saugers positioned themselves up by the dam where there was moving water. The spot my dad was fishing was 10 feet of water in 2004 and this year when we went down there it was only 4 feet. The river definitely changed since then.

Q: When Przekurat whacked that 9-pounder, did you think the tournament was over?
— Nick K. (Winona, MN)
A: I knew I had a lot of ground to make up. I was still catching more keepers than he was so I knew I had a chance. But I also knew he was on a big-fish program. The last day of competition he went downriver instead of upriver where he was fishing. Once he abandoned his big-fish spot, I knew I had a chance at that moment if I could just get close to a limit. He was just fishing to catch a couple. I knew if I could get close to a limit with a couple good ones I’d have a shot.

Q: I know you won a team tournament on the Illinois River with your mother. Was this the biggest win of your career?
— Joe (Janesville, WI)
A: This last one was the biggest of my career. The first one is always sweet, especially against a tough field in Spring Valley. But this one was all about patience and sticking to the game plan and fishing the fish that I knew how to catch. So this was by far the biggest win of my career.

Q: I heard you made repeated casts to the same rocks again and again. Were the fish replenishing in that area? I’m used to catching a few fish at a spot and then having to move on. And how do you have the confidence to stay in the same spot when the bite is that tough?
— Ted (Rochester, MN)
A: Yes, the fish were moving up. What kept bringing them up was the amount of baitfish – tons of shiners and some shad. They would go on feeding periods where they’d push the minnows to the surface. Seeing those fish bust the surface really helped my confidence; I knew there were fish up there and they were active. So I’d keep casting and casting. I typically caught them not right where they were busting, but nearby like 10 feet away right in the rock spine.

Q: Did you happen to use any dew worms during the championship?
— Fred (Eldridge, IA)
A: That’s an inside thing I had with a buddy down there. Before this tournament, I had absolutely no idea what a dew worm was. I’m laughing so hard right now. After this tournament I’m going to start calling night crawlers dew worms. That’s hilarious that someone would ask that. But to answer the question, I didn’t use them at all, but I did have them in the boat.

Q: Which crankbaits were the best producers?
— Greg (Cedar Rapids, IA)
A: The No. 5 Glass Shad Raps and Berkley Flicker Shad No. 7s were the best. The best colors were firetiger, perch and any crawfish pattern. In the morning, I would throw the darker crawfish color and once the sun got above the dam I would throw the perch and firetiger colors. I just could not catch fish on the crawfish color during the day.

Q: Great year Danny! How tough was it to stay focused through a tough bite on the river and to stay in the same spot for the entire championship?
— Andy (Ames, IA)
A: It was really tough. It made for a mentally tough tournament. Ed Stachowski, who finished second, caught 20 or 30 fish a day on the final two days. So I kept on seeing Ed net fish. That was pretty stressful. I’m getting less than a bite per hour and he’s catching them left and right. I didn’t know it at the time, but his were a lot smaller. I just had to have the faith the bigger ones were continuing to move up into my spot.

Q: What exactly were you targeting with your casts below the dam?
— Brady (Victoria, MN)
A: There was a spine that ran parallel to the dam. And there was a little spine that ran perpendicular to the dam like 20-yards offshore. I would position that boat right on the corner where they met and then I would just keep casting up and down that spine with a mix of long and short casts. The spine itself was chunk rock that sat up about a half foot and provided a little place for the bait to hide. I basically treated it like a mini wing dam, but there wasn’t that drastic of a rise.

Q: Did the water quality and current flow change over the course of the championship? If so what did you do to adjust?
— Jim (Clear Lake, IA)
A: Where I was fishing it remained the same the whole entire time. I knew my fish wouldn’t be affected whether it was 60 degrees or 25 degrees. There was no difference in clarity – I had just less than a foot of clarity,which was better than the main river. And I didn’t have to deal with the weeds that were floating downriver or any current changes.

Q: Why is the fishing so much better upstream on the Mississippi River compared to the Quad Cities? Is it pressure? Bait?
— Terry (Wabasha, MN)
A: I know Pool 14 does have a huge population of walleyes and big ones too. I just think that with the warm water temperatures we had in the summer and the lack of flow made it tough. We were just faced with some pretty bad conditions. Its normally not that unusual to get a good limit of saugers in that place.

Q: Danny, you had an awesome year, especially at the end of the season. What did you do to really get on the roll at the end of the year?
— Rich (Indianola, IA)
A: Basically what I did was my prefishing before my prefishing – things like looking at my Navionics chip on my computer, looking at reports and just getting prepared before I left was crucial. That was pretty much what I did different than any other events. Once that ball got rolling, I felt confident in myself and what I was doing with my game plan. Then it was just a matter of executing in the tournament.

Q: Do you prefer open-water trolling tournaments like Erie and Green Bay or river systems like the Missouri and Mississippi?
— Ryan W. (Appleton, WI)
A: Let’s see here. I kind of enjoy the open water. I like trolling, pulling spinner rigs and boards. But this year rivers and reservoirs were good to me also. Down on Lake Oahe I was trolling so it was kind of like fishing the big lakes. I’ve always good luck on rivers because I love to jig. I guess I love them all when I’m catching fish.

Q: I’ve heard a lot of people talk about the need to eliminate live bait in walleye tournaments. Do you think it would help increase public interest if only artificials were allowed?
— Ryan W. (Appleton, WI)
A: It would. I’m all for artificial tournaments. You would bring in more sponsors and people would buy more product if you can show them you will catch walleyes with artificials. To be honest, I haven’t put on a minnow on my jig in almost four years. We just need to show people that it works. I think it would definitely help the sport of walleye fishing, that’s for sure.

– MODERATOR COMMENT –
Unfortunately, that’s all the time we have to chat with Danny Plautz today. Thanks, once again, to all the fans who tuned in and participated in today’s Reel Chat. And a special thanks to Mercury pro Danny Plautz, the 2012 National Guard FLW Walleye Tour Championship winner, for giving us his time and insights.