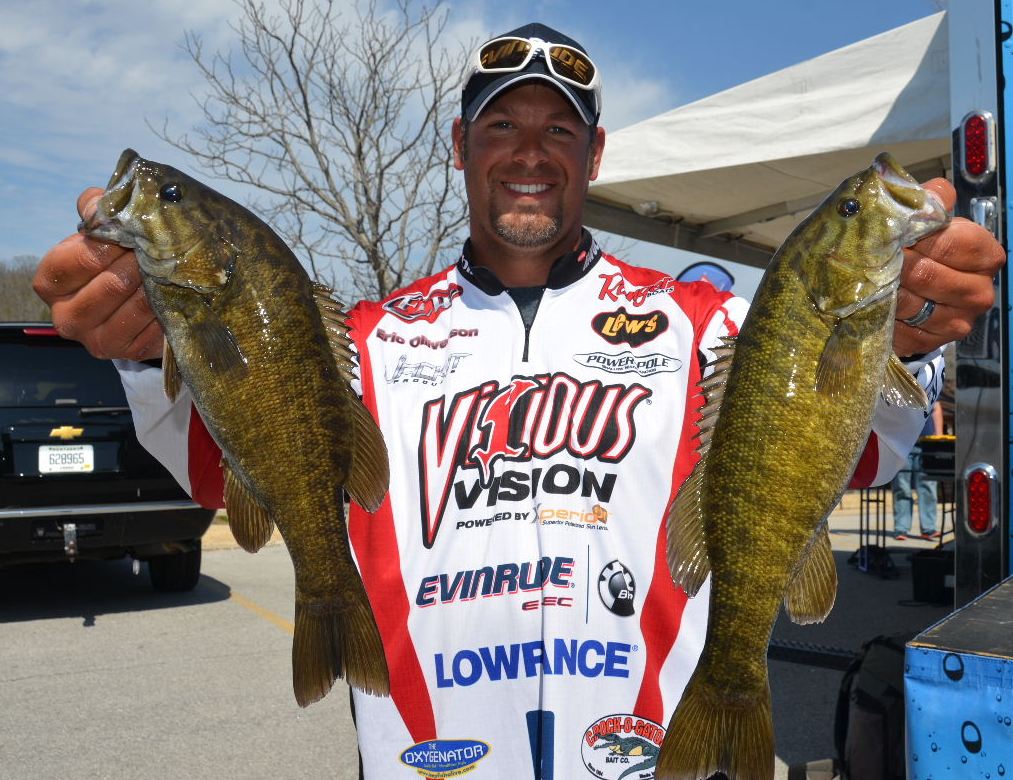 Eric Olliverson slipped on day two with a catch of 9-5 to drop him to 13th place. Photo by Kyle Wood. Angler: Eric Olliverson.
May 5, 2014 • Curtis Niedermier • Uncategorized

When FLW announced its 2014 Walmart FLW Tour schedule back in 2013, Eric Olliverson grabbed his calendar and drew a great big circle around the four days spanning April 10-13 – Beaver Lake. For Olliverson, a Tour rookie, that four-day period of competition was his window to make a splash diving into the tournament-fishing world.

While other pros no doubt lamented that they’d once again be visiting the northwest Arkansas reservoir, which has a reputation as being a difficult place to catch fish consistently, Olliverson had a plan that included something fans don’t normally see at Beaver Lake Tour events: big smallmouth bass.

He also had at his disposal a unique presentation perfectly suited for the deep, clear waters where Beaver’s brownies live. For many local anglers, it’s known as “scrubbing” – slowly reeling and dragging a small grub across the rocks in deep water. Olliverson’s twist is to match the ultralight tackle and line normally used to scrub with a swimbait of a size more tournament-worthy.

“When the schedule first came out and I saw Beaver Lake, I had goose bumps that lasted seven months,” Olliverson told reporters after the day-one weigh-in, where he showed off a 14-pound, 12-ounce limit of smallmouths and spotted bass that he caught with the scrubbing technique. “Every time my wife would talk about Beaver Lake, I’d get goose bumps again. I told my wife before I left that this could be a special week.

“A lot of people don’t realize it, but that tournament [Beaver Lake] can be won on smallmouths alone,” he adds. “I’ve had too many 17- to 20-pound days out there with all smallmouths. There’re that many big smallmouths living in that lake.”

Unfortunately for Olliverson, wild weather swings put a damper on Beaver’s deep-water bite, and with it his chances to win. He slipped in the standings on the second day, eventually finishing in 14th place.

When the scales settled in the end, several of the top 10 anglers were also using a technique similar to that of Olliverson. We asked him to break down the scrubbing technique for us, as we all could stand to see a few more brown bass emerge boatside this spring.

Olliverson relies on scrubbing from the prespawn period through the end of the spawn, which in his part of the country near Lampe, Mo., spans mid-March through mid-May.

The key is locating staging and spawning areas.

“This time of year I am normally fishing flatter banks,” Olliverson says. “I look for flat pea gravel with scattered big boulders. This year [at Beaver] was a little different. We caught them earlier in their spawn. This year they were more on the bigger rock, where there was really deep water close to them.”

His best areas were pockets near the mouths of main-lake creeks where the channel swung in close to shore and secondary points in the creeks with pea gravel mixed with chunk rock or boulders. The key was the gravel, which is good spawning substrate, though several of his biggest bass during the week came from around standing timber.

The final ingredient was wind. On days when the wind blew, the contingent of pros fishing Beaver’s lower end saw the bite pick up thanks to the camouflage that a choppy surface provides in clear water.

“Any time I had wind, gravel mixed with bigger rock and timber close by, that was the kind of deal where I felt like I could catch some bigger fish,” Olliverson says. “They spawn on that gravel. The staging areas are the same areas as where they’ll spawn. The fish that I was targeting were anywhere from 8 feet deep all the way down to 30 feet.” 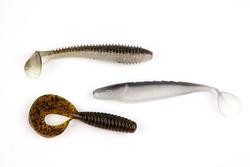 Traditionally, scrubbing is done with a grub or small swimbait and a small jighead – think crappie or walleye tackle for smallmouths.

“This year I switched the bait,” Olliverson says. “It’s a Missile Baits Shockwave. It’s a new bait. For years I used a Swimmin’ Minnow, which is a crappie bait made by Luck-E-Strike. It’s something that I catch a lot of walleyes on. That’s how I found these brownies. I was fishing for walleye and crappie, and I started noticing I was catching some excellent smallmouths. Over the years I’ve kind of stepped up my baits. It was a prototype bait last year, and I noticed I was catching a lot bigger fish on that bigger swimbait.”

The technique requires a great deal of patience because of the light tackle and deep water. Olliverson uses darter or round-head lead jigheads ranging from 1/8 to 3/16 ounce most of the time. He’ll upsize to 1/4 ounce on occasion and only uses 3/8 and 1/2 ounce in extreme winds. 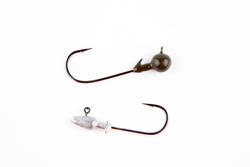 Olliverson starts by parking his boat over deep water and making an extremely long cast, which helps to shield his approach from the fish. The lure usually lands in about 5 feet of water on the first cast, depending on the spot, and then is retrieved down the slope into deeper water. On subsequent casts, Olliverson adjusts his target depth by moving his boat in and out.

The entire presentation takes place on bottom or within a foot of bottom. Once the lure sinks, Olliverson commences with a tedious, slow retrieve with the reel handle barely turning.

“That’s why you want to really watch your line,” Olliverson says. “I’ll start feeling that bottom-bumping, and about every seven or eight cranks of the reel handle, I’ll just kind of let it fall back to the bottom. As much as I can, I try to maintain bottom contact. Each day you figure out where they’re hitting. If they start hitting closer to the boat, I’ll back out farther. Sometimes I can stay closer to the bank.” 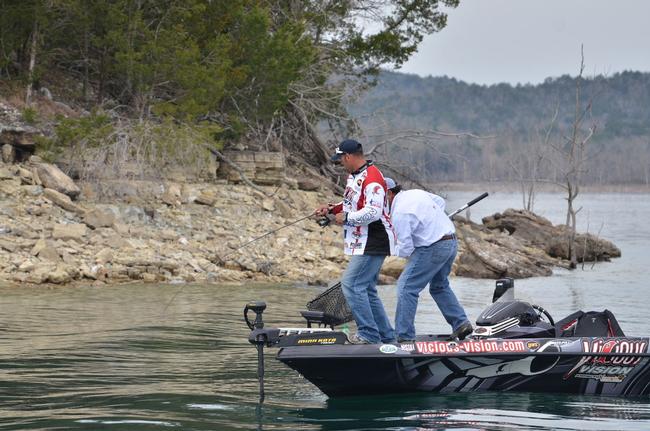 Olliverson admits that he’s a power fisherman, but scrubbing works so well for smallmouths in spring that he reprograms himself to use ultra-light line and spinning tackle: 6-pound-test Vicious fluorocarbon and a 7-foot, medium-light Lew’s rod.

The light line allows the little jig to sink more quickly, and it spooks fewer fish. However, it’s also challenging line to use in lakes full of standing timber and snaggy rocks.

“I’ve done this for so long that fishing around trees doesn’t scare me,” Olliverson says. “I had two of my fish that first day at Beaver – 3-pounders – that came right out of a tree. You do lose some, but man, I just have confidence that by back-reeling I can get those fish out.

“I just take my time,” he adds. “The first thing I do when I hook one is I kind of pull into it. I get away from the cover and try to get it out to that deep water. I sweep-set and reel just as fast as I can to try to bury that hook into it.”

Forrest Wood Cup champ Randall Tharp coined the term “the juice” when referring to the sweetest spots within large expanses of aquatic vegetation. For Olliverson, putting together a tournament game plan for his deep smallmouth technique requires finding a similarly small, productive patch of gravel and rock within a lake full of gravel and rock.

The search starts with map and visual shoreline study, locating channel swings, deep points and other structures where gravel banks are near deep water. Once they’re found, the actual cast-and-search can begin.

“Typically the places that I fish are no larger than a 30- or 40-yard area,” he says. “I’m not covering a bunch of water. They’ll really bunch up.

“I can think of several areas where my boat will not move from a 10- or 15-yard area, and I know exactly what cast I need to make,” he adds. “I have days where I might have to revisit these spots several times, but sometimes I can camp on one and catch 10 or 15 keepers on one stop.”

Olliverson did his part at Beaver Lake this season. He dedicated himself to a technique that he knew could win, but the fish just didn’t cooperate.

“Realistically, I lost some key fish, especially the third day,” he says. “I had three of the right bites. I literally saw those fish, but I never broke off. They weren’t eating it right; they were barely skin-hooked. Even with me letting them eat it, they just weren’t mouthing the bait really well.

“I had the fish on to do extremely well in this tournament,” he adds. “I have no regrets. Any time I can go to a tournament and have one rod on the deck of my boat and fish with that much confidence, I’ve got no regrets. I’m telling you, one of these years, if we keep coming back to Beaver, that’s a way that you can win this tournament.”

The Ozark region, with its blue ribbon trout streams and links to tournament bass fishing’s infancy, is steeped in fishing tradition. While bass fishing fans are still getting to know Eric Olliverson, his family’s history is already part of that tradition.

The fishing bug skipped a generation in the Olliverson family, but it bit Eric hard as a kid.

“Looking back, my grandfather was who got me into fishing,” he says. “That was all I wanted to do was go out and trout fish and just fish. I didn’t watch cartoons growing up. It was all about Bill Dance and Hank Parker and those guys.”

Eric’s passion parlayed into a full-time career as a multi-species fishing guide on Bull Shoals, Table Rock and Lake Taneycomo. And in his free time, he fished local derbies before progressing to the regional level. In 14 years as a professional, Eric has won just about everything that can be won in the Ozarks. That’s what led him to pursue the FLW Tour.

“I’ve always wanted a chance to fish the Tour and was able to hook the right sponsors and just make it happen this year,” he says. “I’m looking forward to not looking back. I’m ready to pursue this. I just love fishing. I’m so passionate about fishing, and I’m more passionate about tournament fishing. So I’m so excited about starting my career as an FLW Tour pro.”

To fish with Olliverson, who bases Eric’s Elite Guide Service out of Lampe, Mo., check out EricsEliteGuideService.com.