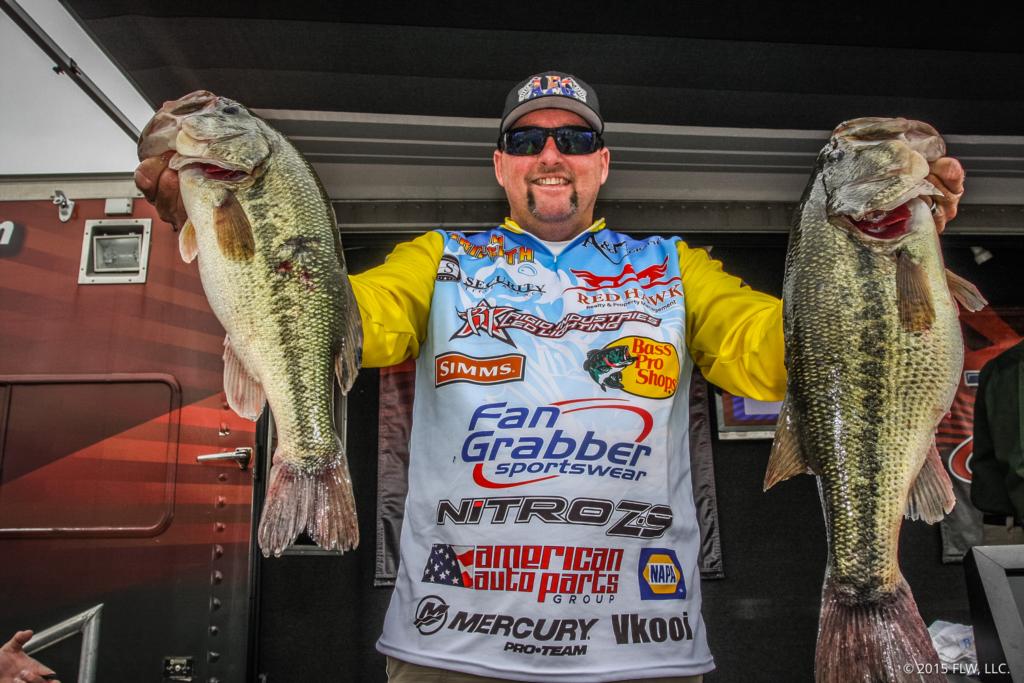 By midday, the prospects were unclear for Jon “Scooter” Griffith here in The Bass Federation National Championship on Grand Lake, but in a roundabout way it provided just the clarity he needed to dial in a pattern that helped him take the day-one lead with an 18-pound, 13-ounce limit.

Griffith began his day by sight-fishing the clear water down by the Pensacola Dam. This opening move, he says, gave him some early comfort, as it matched the transparent water he’s used to fishing near his home in Mesa, Ariz. Targeting windblown points, Griffith got his early bites with reaction baits in about 4 to 8 feet of water. Unfortunately, the plan turned out to be less productive than he had expected.

“I thought I was going to struggle today because I only had three fish at noon, but then I just started catching them,” he recalls. “I caught five more, and a couple were pretty good size.”

The key to his afternoon rally was moving back up the lake to areas of dirty water.

“I think a lot of these fish haven’t been pressured as much as I thought they were, so I’m going to go back to those first thing tomorrow. If that doesn’t work, I have two bed fish that I can go back to and catch anytime.”

In the dirty water, Griffith found that the fish had pushed extremely shallow. Some of his bites on reaction baits came in mere inches of water.

“There were a couple of casts where I threw the bait up in there and was surprised my bait didn’t hit the bottom. The bites were a lot more aggressive in the shallow water. And they’re stronger,” he notes. “The biggest fish I caught were in the muddy water, so that makes me want to gamble tomorrow and go. You can’t win if you don’t gamble a little bit.”

Griffith found most of his muddy-water fish around rocks, floating wood and debris piled up by wave action. Navigation was tricky, so he had to advance cautiously. He’ll take it easy when he returns in the second round. The Arizona angler isn’t ruling out the clear-water fish, so he’ll be prepared for both game plans.

“It was all about the bait color,” he adds. “Once I figured out the right color, it all worked out. Tomorrow, I’ll have four baits tied on — two for clear water and two for muddy water.” 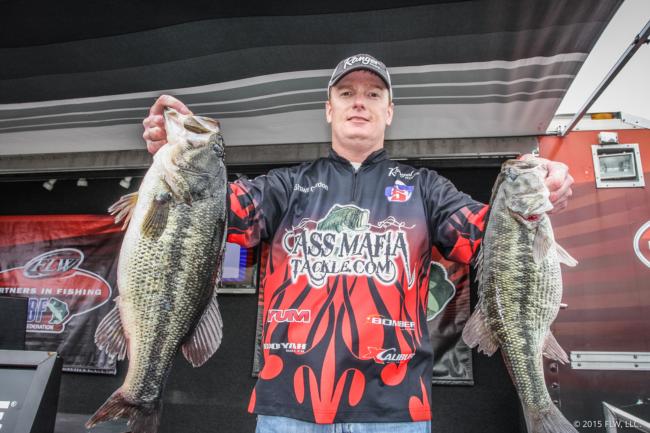 A key element of success is to know when to leave a good thing for a better thing. That’s what propelled Shawn Gordon to second place with 17 pounds, 3 ounces.

Starting in the mid-lake area, Gordon caught a few early fish by cranking an XCalibur square-bill crankbait on rocks and flat points. Then he amassed most of his weight in an area near the dam where he caught key bed fish by flipping.

“I was going down-lake to sight-fish when the sun came out this afternoon,” Gordon recalls. “I had some bed fish marked [from practice], but the 5-pounder I caught was a gift. I was trolling into my area to see if a 3-pounder was still there, and when I went by I saw a big fish swim off. I made one pitch to her and she ate it.” 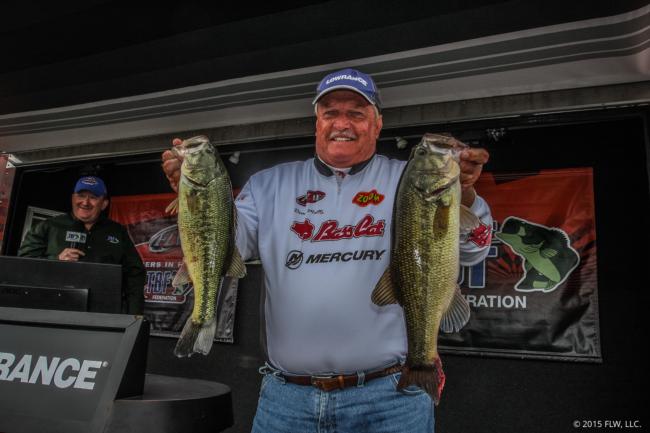 At the morning takeoff, local pro Dean Matts revealed he intended to fish a Texas-rigged Zoom Speed Craw for postspawners. Sticking to his game plan rewarded him with a third-place limit that weighed 16 pounds, 3 ounces.

The cold front that moved through the area curtailed much of the early action, but Matts persevered.

“The fish weren’t biting early – I only had one fish at 11,” he says. “The sun came out in the afternoon, and that turned on the fish. But when the sun went back behind the clouds, the fish quit again.”

Two spots, one bait and a simple rotation – that was Danny Stamper’s strategy for catching the fourth-place bag. The spots were about 10 minutes apart, and that was a perfect fit for his first visit to Grand.

“When I left Montana, I said to myself, ‘I’m not going to fish the whole lake.’ I’ve never been here before, so I tried to find a few spots and fish them hard. That’s what I did,” confesses Stamper.

“We caught fish all day,” Stamper says. “We’d fish through one spot, go to the other spot, fish through that one and go back to the first spot. I only caught six fish today, and it was evenly split [between those spots]. I spent about the same amount of time on each one.” 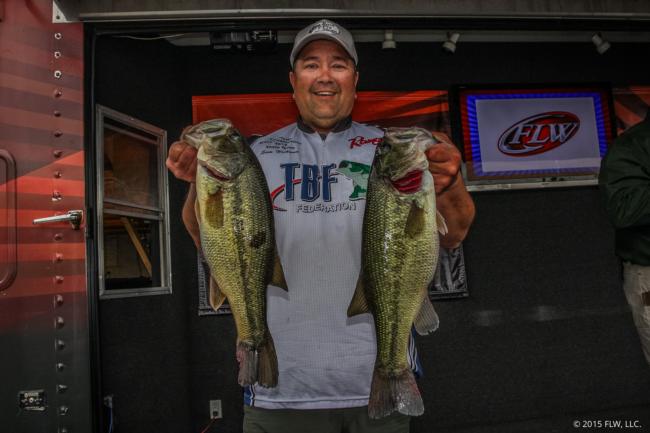 Knowing that Grand’s bed fish had taken a beating during the Rayovac FLW Series Central Division event the previous week, Sam Heckman concocted a different approach that produced for him on day one.

“We looked for bedding fish in practice, but they were running like crazy and scared,” he says. “So my practice partner and I decided to come down, fish dirty water and just find fish that wanted to eat.”

In the dirty water, Heckman caught his fish on jigs, a spinnerbait and a ChatterBait. He ended up catching most of his fish on the latter. 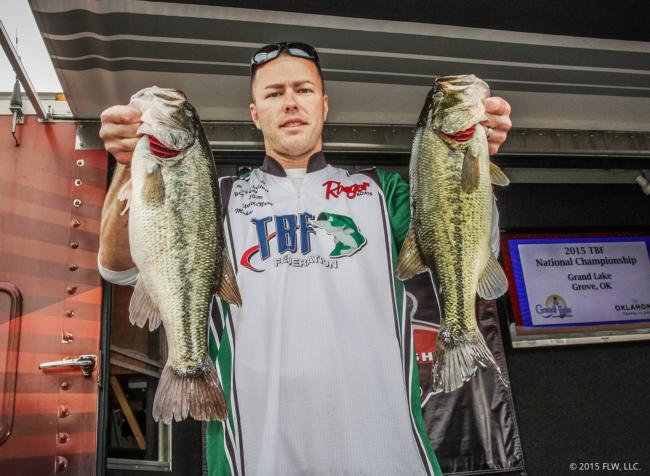 Michael McNary’s day wasn’t looking too good, until he made some key decisions that would lead him to the bites he needed to take fifth with 15 pounds, 7 ounces.

“I had a really slow start — I didn’t have a fish in the box until 11 o’clock,” McNary says. “I had fish up on beds in practice, but they pulled off because of the cold front. I had to adjust, and I caught a bunch of fish in the afternoon and culled a few times. In the last hour, I shifted back to the bed fish and found that they had pulled up in the pockets. The sun popped out in the afternoon, and about an hour later, they bit.”

Prior to his afternoon bite, McNary had pulled out to the points flanking the spawning pockets, where pitching jigs was most productive. 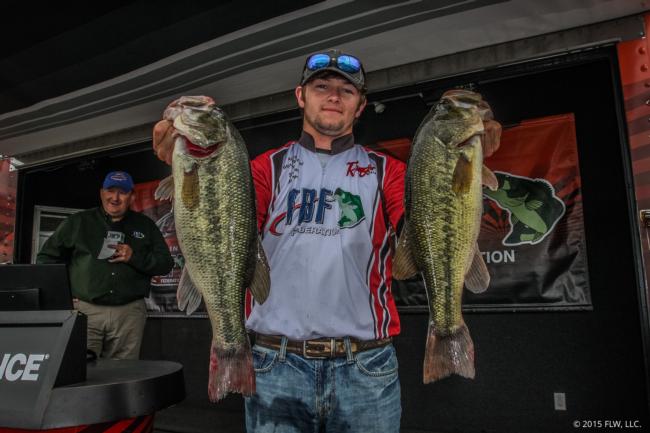 Doing well out of the back of the boat is one thing; topping the entire field – pros included – is quite another. Wes Logan, of Springville, Ala., did just that by sacking up 19 pounds to lead the co-angler division with the heaviest bag of day one. He caught most of his fish on a spinnerbait, but also added a couple of keepers on a homemade jig with a chunk trailer.