Boater and non-boater tickets punched to the Forrest Wood Cup 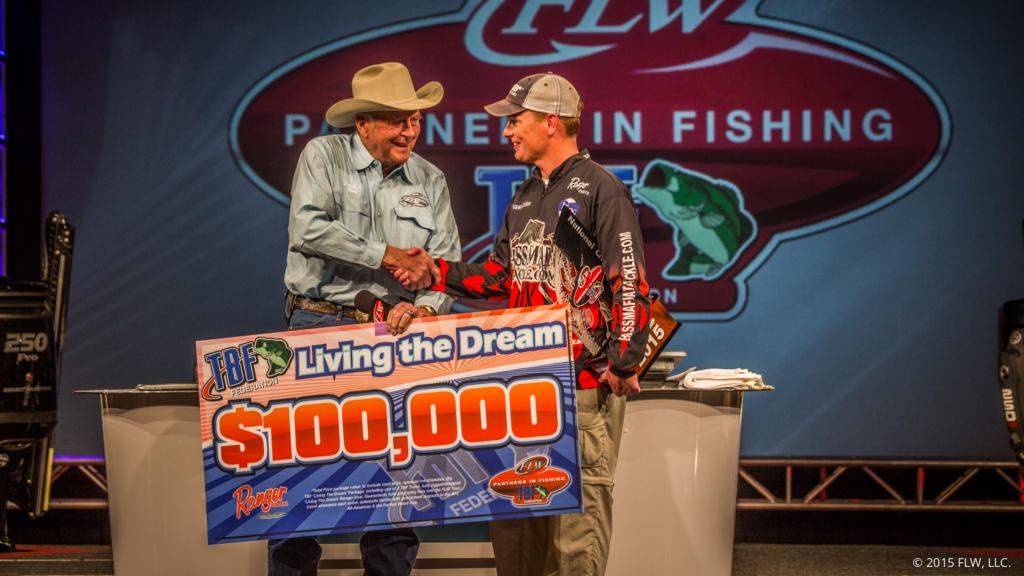 He earns his living as a financial planner, so it’s fair to say that Shawn Gordon knows something about risk assessment. Today, his discernment paid big dividends, as his decision to forego the bed-fishing pattern he was considering led him to the winning sack in the 2015 The Bass Federation National Championship on Grand Lake.

Gordon’s day-three limit weighed 18 pounds, 10 ounces – the heaviest bag of day three. This gave him a tournament total of 50-2 and a winning margin of 4-8.

The victory earned Gordon $5,000 and the “Living The Dream” prize package of a Ranger boat, motor and trailer plus entry fees and a travel stipend for the 2016 Walmart FLW Tour. Gordon’s win also earned him a berth in the 2015 Forrest Wood Cup on Lake Ouachita, and he qualified for the 2015 Walmart Bass Fishing League All-American on Kentucky Lake by finishing highest among Central Division qualifiers.

Entering the event 2 pounds, 11 ounces behind day-two leader Sam Heckman, Gordon took a good look at the morning’s conditions and knew he had to make a decision. After two days of clouds and scattered rain, a mild cold front that passed through the area brought sunny skies and blustery winds.

Adding to the calculation was the short fishing day today. With weigh-in 90 minutes away on the FLW Tour stage in Rogers, Ark., TBF finalists had to be off the water by 1 p.m.

“It was rough when we came underneath the bridge and it was going to be a 30-minute boat ride down to my sight-fishing spot and a 30-minute boat ride back,” Gordon says. “I only had one for sure to go fish for, so I kind of punted and chunked a crankbait all day. I just didn’t think it was worth it to run down there with the short day. It made more sense to stick around the takeoff area and fish.”

Gordon caught all of his fish on a battle-tested square-bill crankbait that he’s had for so many years that the bait has lost much of its original form.

“It’s an old square bill that’s not square anymore because it’s been thrown so much,” he jokes. “It’s about time to retire it. It used to be chartreuse, but now it’s kind of white.”

Gordon ended up spending his entire day working shallow flats with wood cover on the west side of the Highway 59 Bridge.

“I started in a shallow spawning pocket with shallow rock and pretty flat banks,” he says. “I ended up catching most of my fish today on three shallow, flat points next to the creek channel. There were shad there, and obviously there were some fish there because my partner [co-angler winner Gilbert Gagner] had over 16 pounds too.”

Gordon says he had a steady morning, with five in the livewell by about 9:30. Most of his weight came between 9 and 10:30.

“At 12:45, I caught one that was almost 3 pounds, and when I went to cull, it wouldn’t cull,” Gordon recalls. “That’s about the time I thought, ‘Well, maybe I do have a shot at this.’ I accomplished my initial goal of making it to the last day because you have to make the last day just to have a shot at winning. I just ran out of bed-fish doing it.”

All of the following boater finalists also qualified for the 2015 All-American for being the highest-finishing boater in each of their respective divisions. 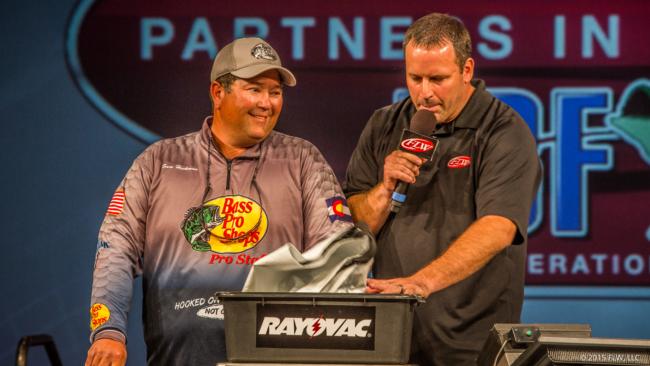 After topping the boater field on day two, Sam Heckman had a bait, he had an area and he had confidence. Unfortunately, changing weather shuffled the deck, and the boater from Fountain, Colo., came up short in the final round.

For two days, Heckman targeted the points, banks and docks full of pockets just five minutes from the Wolf Creek Park takeoff site. A Z-Man ChatterBait with a green pumpkin skirt and a Reaction Innovations Little Dipper in the dirty Sanchez color produced all of his fish.

On day three, the sunny skies undoubtedly had the fish holding tighter to cover, so the roamers he was finding earlier in the week were few and far between. Also, wind and waves pounded some of his key areas on day three.

“I caught most of my fish [the previous two days] when it was cloudy out in the mornings,” Heckman says. “Today, the wind was blowing pretty hard into the points I was fishing, so I think that had a lot to do with it.

Heckman describes the area where he caught fish as a collection of cuts and coves off a river-channel swing. He says he was targeting postspawn fish.

“We were in the dirty water, looking for fish that wanted to eat,” he adds. 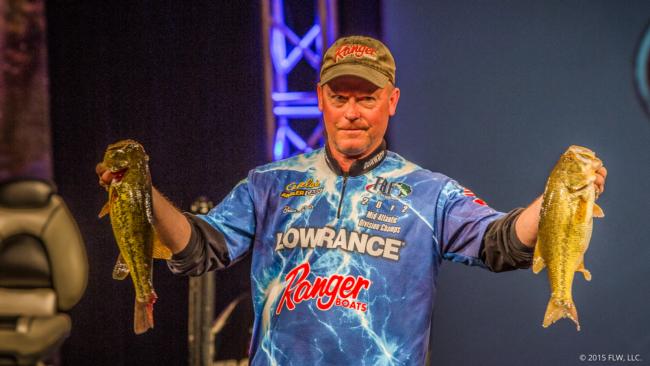 If tournament fishing was a roller coaster, Brian LaClair’s event wouldn’t scare anyone. And that’s mostly a good thing, as the angler from Denton, Md., turned in consistent bags of 13-10, 13-11 and 13-4 over three days.

“I think I fished pretty clean. I lost maybe two fish during the week,” he says. “I didn’t really find any huge fish, but everything I caught was pretty consistent for three days.”

LaClair caught three of his day-three fish by flipping docks with a 1/4-ounce brown jig with a Zoom twin-tail grub trailer. He trimmed the jig skirt to allow for maximum trailer action and dipped his trailer in chartreuse.

He caught two more keepers on a drop-shot with a brown Jackall finesse worm.

“I was flipping docks where the fish could not see me,” LaClair says. “I was flipping over, skipping under and just being really stealthy. I had been catching fish there the last three days, and out of the three spots I chose to fish today that was the only place where I caught fish.” 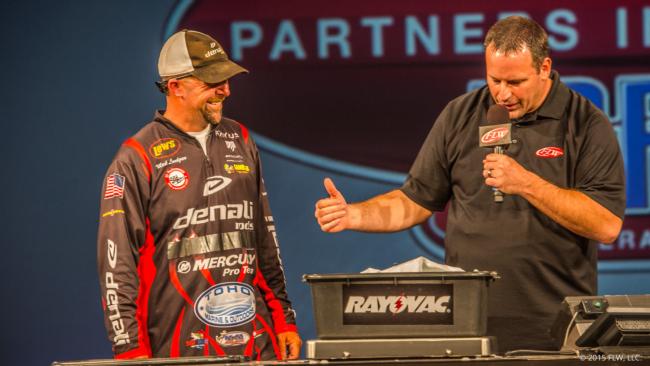 Consistently throughout the tournament, Mark Lundgren of Cocoa, Fla., stuck with a two-pronged strategy that he used to cover water and devote quality time to anything interesting he came across.

“I probably threw the crankbait 80 percent of the time,” he says. “If I came across some good-looking wood, I’d pick up the jig and pick it apart. I’d see if I could grab one out of there and then keep on going with the crankbait.”

Lundgren targeted rocky points in 2 to 5 feet of water and bridge riprap. 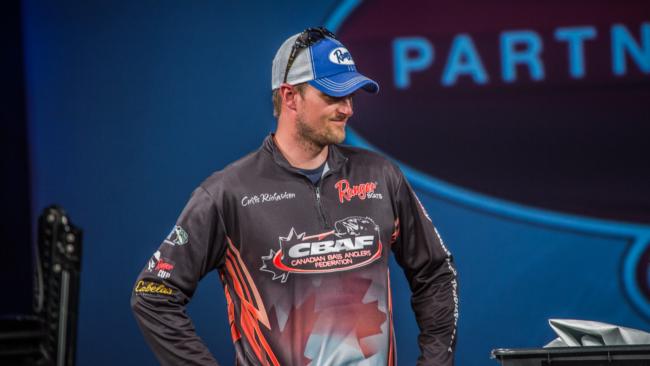 Adapting to the day’s conditions and congestion was essential for Curtis Richardson of Belleville, Ontario. After finding six boats from a local tournament on his first spot, and noting that the wind had shifted from the direction it blew the previous day, he changed areas and ran to spot No. 2.

That spot offered only a couple of bites, so he bailed and ran to his back-up area. Fortunately, this spot had favorable wind, no company and more cooperative fish.

“I went to my back-up stuff a little earlier today because with the shorter day, I had to react quicker,” he says.

Richardson targeted postspawn banks outside of spawning pockets. He also sight-fished one of his keepers.

He caught his fish on a 1/4-ounce ball-head jig and a 1/2-ounce football jig, both green pumpkin with Zoom Speed Craw trailers. He fished the lighter jig on spinning gear with 8-pound-test fluorocarbon.

The light jig produced one keeper, and the football head added the other four. 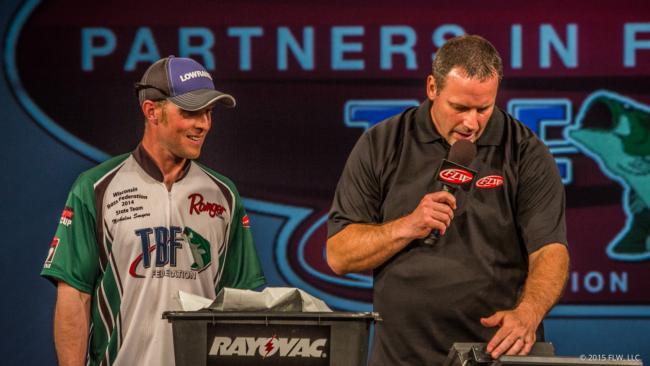 Two productive days delivered his divisional win, but the final round mostly dried up for Frankville, Wis., boater Nicholas Smyers.

“The first two days, particularly the second day, I made the right choice,” says Smyers, who threw a Storm Arashi square-bill crankbait. He caught only one keeper today. “Today, I stayed with that choice. I ground it out, and I thought it was my best way to win this tournament. It just didn’t pan out for me.

“I guess I just didn’t get around fish today,” he adds. “I think if I had moved to a different area of the lake and covered a little more water I might have run into them. But with a shorter day, it’s hard to leave fish to go find fish.” 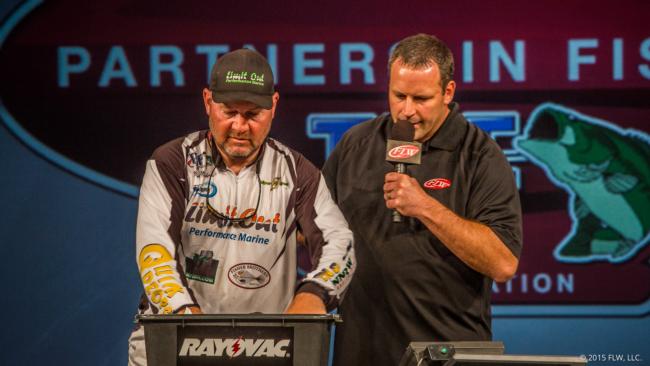 Day three was also slim for Mark Maderos of Maple Valley, Wash. He caught one keeper that weighed 2 pounds, 13 ounces.

That fish bit a drop-shot on its bed, and Maderos says he went to extreme measures to maintain stealth.

“I was able to use my hands to go down the dock with no trolling motor and my electronics turned off,” he says. “There was a lattice handrail that I could peek through and see if the fish was there. On the second cast, I got the male, but as soon as I got him, the female spooked right off.”

Maderos says the bite was so tough that he downsized his rig to try and tempt some response. He used a 1/8-ounce weight and a 3-inch Density Tackle Panic Minnow. 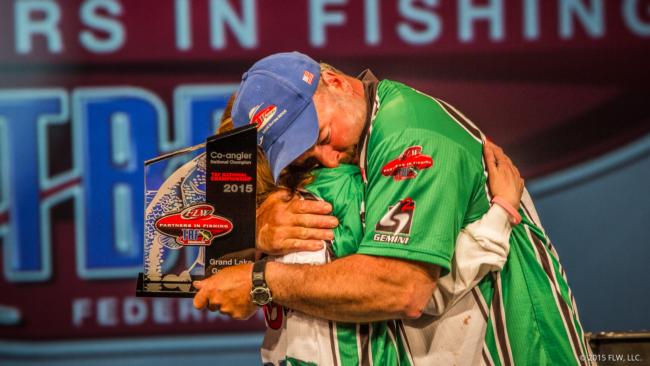 Gilbert Gagner climbed the mountain once before, and the view was so grand that he had to do it again, if only on a different peak. The 2012 TBF National Champion boater, Gagner tallied a three-day total of 43 pounds, 4 ounces and won his second championship on Grand Lake – this time on the co-angler side.

His achievement marked the first time an angler has won TBF titles both as a boater and non-boater. For his win, Gagner earned $2,500, the “Living The Dream” prize package of entry into the Rayovac FLW Series division of his choice and a berth in the Forrest Wood Cup on Lake Ouachita. As a division champion, he’ll also fish the 2015 BFL All-American on Kentucky Lake.

Paired with winning boater Shawn Gordon, the co-angler from Highgate Springs, Vt., caught his fish on square-bill crankbaits – a Strike King KVD 1.5 (silent version) and a rattling Speed Trap. He found his fish on shallow flats with a mix of rock and wood.

“Today, my boater was considering bed-fishing and throwing square bills in shallow water,” Gagner says. “He decided that the wind was blowing too hard, so he left the bedding fish alone.

“As a co-angler, with bedding fish, you really don’t have an opportunity to do as much casting as you’d like. But Shawn caught a couple of quick fish on a square bill, and that just cemented the whole day of staying with the shallow-water pattern, which gave me enough water to fish.”

Gagner described an important adjustment that contributed to his success.

“I felt that midway through the day, the fish actually pulled out deeper, and I think they got a little spooked because we were on them a little more than we probably should have been,” he says. “So I went to the silent crankbait, and that caught a couple of key fish.”