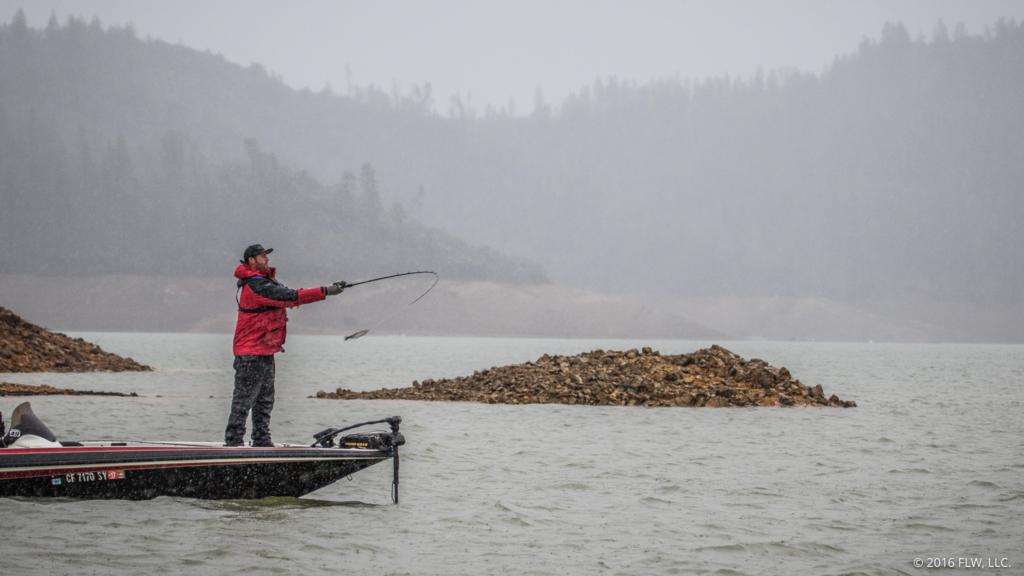 Though the weather was fairly terrible on day one of the Costa FLW Series presented by Minn Kota on Shasta Lake, the fish bit well and Richard Dobyns and Miles Howe topped the leaderboard with 16-2 and 16-1 respectively. The weather the morning of day two was even worse, with strong winds and waves making large sections of the lake virtually unfishable combined with a steady rain (mostly sideways) that started around 9:30 a.m. and lasted until almost noon. Thankfully, the rain has blown out and given way to sun and clouds, and the wind is moderating somewhat – the conditions this afternoon should be nearly ideal.

On the fishing front, most of the leaders are struggling a bit and the door appears to be open for some movement. Richard Dobyns started the day with three small keepers, well off his 16-pound mark from day one. Throwing a true mix of reaction baits and finesse, the California pro had a real struggle with the wind and waves on his areas.

Miles Howe was one short of a limit when we left him. The majority of the water he was fishing is considerably more protected than Dobyns’ areas, and he seemed well on his way to a limit or more. Fishing nearby, ninth-place pro Joe Uribe Jr. had already boxed a limit and was the proud owner of two “solid” fish.

Down the field, Roy Hawk and Justin Kerr both had small limits but no big ones. Sage Baker, who started the day in fourth, had only four bass around noon and was hunting a keeper of any size. Bryant Smith remains unaccounted for.

Be sure to tune your browsers right back here at 3 p.m. PT for FLW Live to see who moves on to the final day!