How to Catch Smallmouths with Hair Jigs

Gussy spills the beans on a killer finesse smallmouth tactic 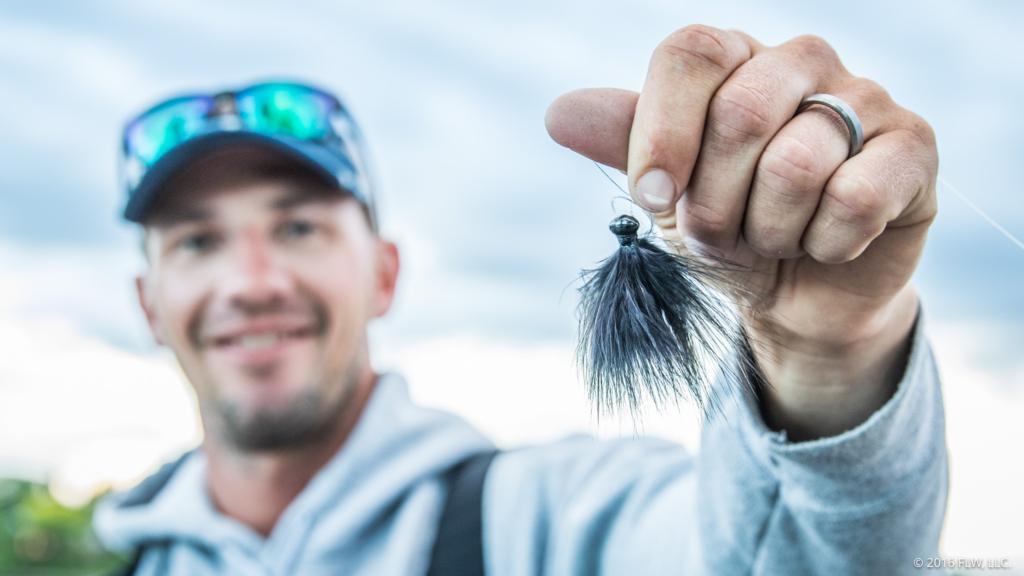 Down south, big hair jigs made in the image of the classic Preacher Jig have experienced a resurgence in recent seasons as tools for catching offshore fish in the summertime.

In the North Country, hair jigs are gaining steam as big-money bass baits too, but instead of “big hair,” you might call the trend “small hair.”

The tactic used to be somewhat of a guarded secret, and some of the more stubborn anglers still remain tight-lipped with regards to their preferred jigs, tactics and scenarios. Not Ontario’s Jeff “Gussy” Gustafson, who fishes the FLW Tour. He believes the smallmouth hair jig is a tool worth sharing with the public. He offers up some of his tricks. 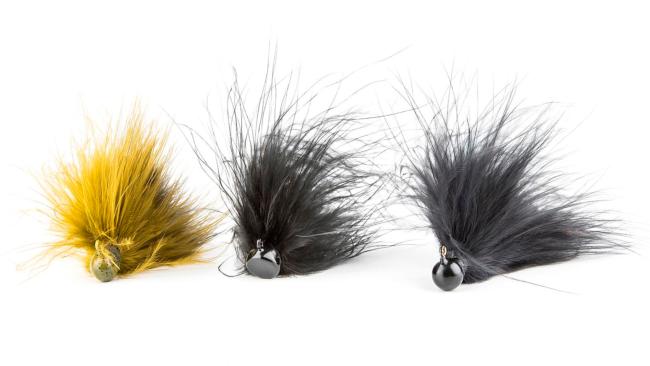 The “right” hair jig for smallmouths is a small 1/16- to 1/8-ounce marabou jig with a round or mushroom-shaped head. The jig is similar to marabou jigs used by crappie fishermen, but bass models will often have a larger, stronger hook and possibly a longer or thicker skirt. Naturally, anglers have their favorites, and there are subtle differences in jigs that make some better than others.

For a quality commercially available jig, Gussy recommends the Northland Marabou Jig (photo above, at left) or the BT Fishing Boo Jig (above, middle), which is a semi-custom job sold by Kruger Farms. Gussy uses both but also ties his own (above, right) with a specific premium hook that he prefers for smallmouths.

Most smallmouth anglers use jigs in natural colors such as brown, black or green. The exception is when fish are spawning, when a brighter jig aids in visually targeting bedding fish. 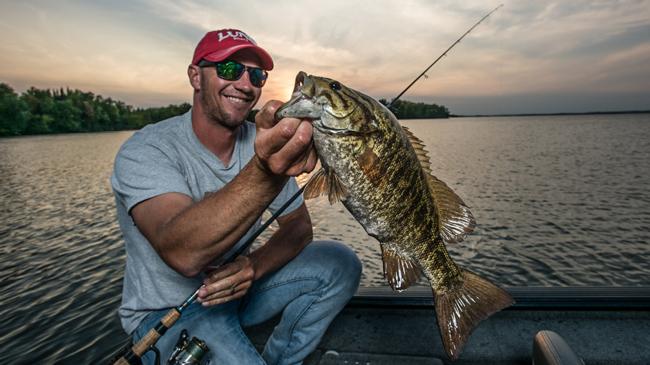 First things first: Hair jigs are nothing new to bass fishing. From tiny float-and-fly jigs to big bucktails, hair jigs have been catching bass for years. However, the marabou jig, as common and well-known as it is, hasn’t exactly lived a glamorous life as a bass-whacking tournament tool.

Partly that’s because anglers such as Gussy have been keeping its effectiveness under wraps for so long, even though they’ve been mopping up with it in major team tournaments on both sides of the U.S.-Canada border, on lakes where smallmouths stay shallow all summer and dominate tournament limits.

“It’s kind of like the secret’s out now a bit,” says Gussy, who guides on Lake of the Woods, a natural lake that sprawls across the border separating Minnesota from northwest Ontario. “It’s something that originated in my part of the world, believe it or not, with a few guys that were guides on Lake of the Woods in northwest Ontario. They started really winning some of our big team tournaments up here on them. Word started to get out. And several of us were going to Sturgeon Bay for the Sturgeon Bay Open in the late 2000s – 2005 to 2010. It worked really, really good there.”

Gussy has been a regular at the Sturgeon Bay Open in Wisconsin, which is sort of like the kickoff to the Northern bass tournament scene each year, and where massive stringers of big-water smallmouths get hauled to the scales. Gussy says the Sturgeon Bay fish are usually in their spawning transition when the event is held each spring, and catching them means fooling nomadic here-today, gone-tomorrow fish on vast areas with little contour. Most fish are caught by targeting a specific depth range and casting at faint black rock spots on sand flats or patches of sand mixed in on larger spans of dark bottom. There aren’t a lot of secret areas, which means boats often group up in spots together. The difference maker in some years was the hair jig.

“When we first started fishing there you could literally go through those big groups of boats and catch eight fish to their one with it,” Gussy says of the little jig, which he’s been fishing since his pre-teen years. 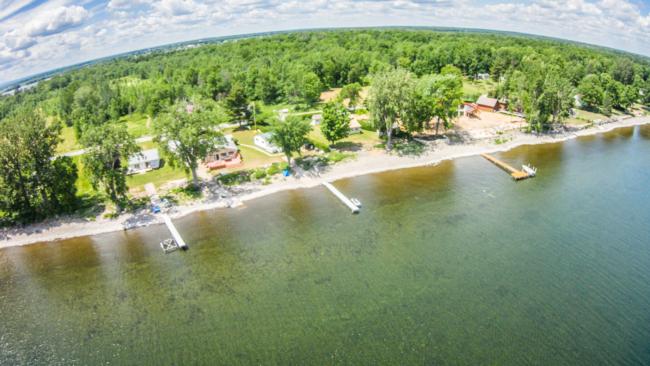 The hair jig in this instance is a finesse bait, unlike larger bucktails that sort of cross the line between finesse and power in the South. And because the jigs being used for smallmouths are so light, they’re most effective when the fish are set up between 4 and 12 feet deep.

“Up here where I live, when we get those runs of really nice hot weather in the summer, a lot of fish are going to be up shallow, hanging around clumps of cabbage and rock piles,” says Gussy. “They suspend a little bit. That hair jig is like an after dinner mint. If you drag it in front of one, it’s going to eat it. It’s the most deadly trick I have to catch them.”

The jig shines in slick-calm conditions, when smallmouths get “lazy” or, as Gussy suggested, when they suspend. A topwater or soft jerkbait will catch them too, but Gussy compares the hair jig to a Yamamoto Senko, in that big and small fish alike just can’t resist it. In windy conditions, he often opts for a more aggressive tactic, such as winding a spinnerbait across the same weeds or rocks.

Because the jig is light and must be fished slowly, it’s most efficient when used to fish specific targets.

“Cabbage weeds are a magnet,” adds Gussy. “You can sort of float through the stuff and pitch to clumps of weeds and catch fish. Big schools of smallmouths will get out in those flats and set up on clumps of isolated cabbage, though I’m usually fishing more rock places – a point, chunk of bank or a reef. If you can find grass that has some rock adjacent to it then that’s going to be a high-percentage spot.” 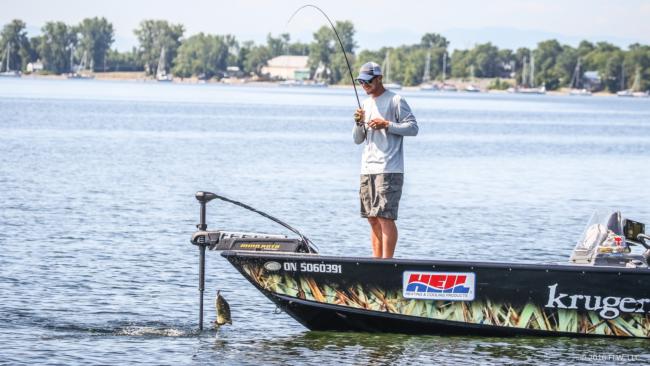 The hair jig is an off-bottom technique for clear-water fishing. You don’t want it in the top 2 feet of the water column, but you don’t want it dragging on bottom either.

The presentation goes something like this: Cast the jig and let it sink with the rod tip pointed at the jig, counting it down if you have a set depth in mind. Then lightly lift the rod and pause so that the jig swings back down and in. Take up the slack as you point the rod back at the jig and repeat, lifting and letting it glide back toward the boat while trying to visualize keeping it at the desired depth.

The technique takes some practice, and Gussy says it’s a challenge to explain with words, but he believes the gliding technique is more effective than simply casting and winding the jig back to the boat.

“It’s not the easiest bait because you need the right rod to be able to cast it, and it’s really all about feel,” he says. “The majority of the time I want that thing to be in the middle of the water column. Smallmouths can see your stuff way better than you think they can. I’ve seen them come from 20 feet to hit a Fluke.

“The problem a lot of people have when trying to understand how to use it and have success with it is they want to twitch their rod and bounce it off bottom,” Gussy continues. “But it’s all about just gliding it through and in front of the fish. They just kind of slurp it up. If the fish are in the mood for it and in the right depth – relatively shallow – it’s unbelievable.”

Another technique for fishing the little hair jig on larger areas is to stroll. If you fish it in a tournament, just make sure the technique is allowed per the tournament’s rules.

Strolling allows for covering a larger area such as a featureless flat, and it keeps the bait out away from the boat, which is important in gin-clear water.

Say the target zone is 8 to 10 feet deep. To cover it by strolling, position the boat in that depth range with the bow pointed in the direction you want to fish. Make a long cast perpendicular to the boat. Now troll straight ahead so that the jig swings slowly around toward the back of the boat in an arcing path.

“Going 1 to 1.2 mph is sort of the magic speed,” says Gussy. “That light jig won’t really touch the bottom, but it’ll get down enough in the water column depending on the size of the jig you’re using. You don’t want it dragging on the bottom. Eventually it’ll get to the back of the boat, so every so often just reel in and cast it again to get it away from the boat. In super-clear water, if you troll over those fish you’re probably spooking the fish, so keeping it out away from the trolling motor and boat helps. You might give it a little pop every once in awhile, but it’s very subtle. It’s a non-invasive little thing going through the water. Smallmouths like that.” 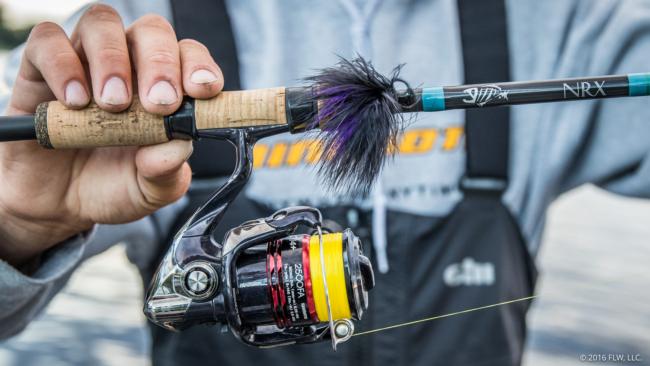 “When I cast it out, I watch the line,” Gussy says. “You can see a lot of bites in the line. The jig is light enough that you’re always going to have a little bit of a bow in your line. If you try to use green braid you’ll get a headache trying to watch your line, and you’re using a leader anyway, so the [yellow line] color doesn’t hurt the presentation.”

Though Gussy says he’s caught some fish with the little hair jig at Beaver Lake, he’s yet to really whack a big bag in the South with it. He’s waiting on the conditions to line up for a shallow smallmouth bite in an FLW Tour event, and he might get his wish this week on Champlain. He says he caught some quality smallmouths with it in practice and plans to use it in the tournament.

Gussy says that there are other windows where fish suspend that he thinks it’ll work. A mayfly hatch, for instance, is a great time to use a small hair jig because it’s such a close semblance to a bug. When smallmouths roam shallow in clear Southern reservoirs in winter, they’re in range of the jig too.

And certainly there are other windows of opportunity just waiting for an angler to pick up the jig and give it a whirl.

“Eventually it’s going to crush it at one of these things,” says Gussy. “Around home I have it on every day.

“I just think it’s something very small and not aggressive. There are all kinds of little bugs and things in the water that they’ll eat, and the jig is something like that. Something that’s ‘finessy’ like that they don’t deny very often.”