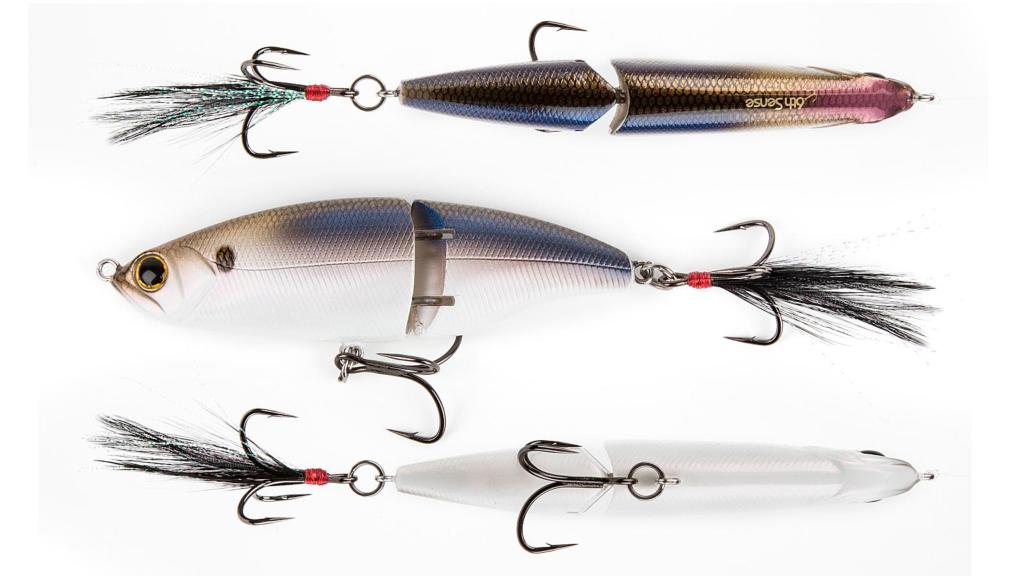 Lure company 6th Sense touts the Speed Glide as an all-purpose baitfish imitation made to cover water fairly quickly with a variety of actions. I’ve fished it for a couple of months now, and it’s for sure a good little bait. You can get the Speed Glide 100 at Tackle Warehouse for $9.99 (which 6th Sense says is the regular retail price), or 6th Sense sells it on its website in more colors for $12.99. 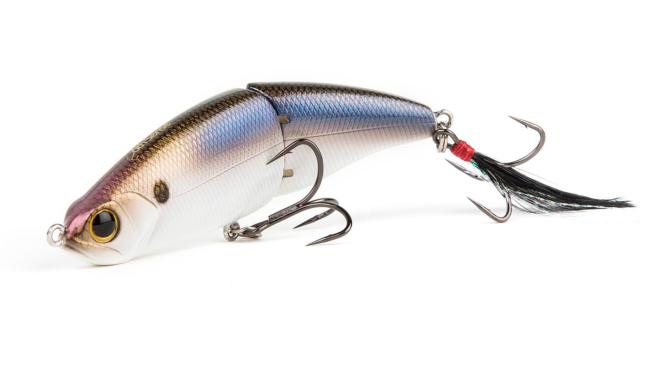 Measuring 100 millimeters long (just shy of 4 inches), the Speed Glide isn’t a huge bait. It’s sized just right to imitate a threadfin shad. It weighs 7/8 ounce, but doesn’t really fish like a super-heavy bait. Instead of a tail, a matching feather/tinsel treble on the back finishes the bait.

Like all 6th Sense baits, this guy looks awesome. It has 3-D eyes, scales and gills and comes in a handful of lovely looking shad colors and some bluegill patterns too. The hooks are good and sharp, but they are a wide-gap style, which you might want to change, though I don’t think I would.

6th Sense says that you can fish the Speed Glide on a straight reel or jerk it in, and I’ve found that to be true. When you do twitch it in, it works a lot like a soft jerkbait, but without the tendency to rise up in the water. Because it has treble hooks, it also occasionally hangs up on itself. When that happens, you pretty much just need to reel it back in and start over.

I think the best way to fish it is predominantly on a straight reel with an occasional pop or two. It swims real pretty on the retrieve. It doesn’t swim with the wide glide of a big glide bait (think Roman Made Negotiator or Duel Twitch’n Ninja Glider), but is more like a crankbait or a Sebile Magic Swimmer. It’s hard to describe perfectly, but when you put it in the water it for sure looks like it would catch bass.

I’ve fished the Speed Glide around a fair bit now, casting it for some schoolers in the backs of pockets on Kentucky Lake and also for an afternoon around the grass at Chickamauga. At Chick, I got along a grass line with some wind blowing and bait popping, and they really ate it. It didn’t last long, but I caught a 5-pounder and a couple of keepers real quick, and lost another because I was horsing it in. So, under the right circumstances, it gets eaten.

I’ve exclusively fished it on fluorocarbon, usually 12-pound test, and I think that’s a good line for it. I could see really heavy line deadening the action, but it has plenty with the 12-pound-test line.

The bait comes with a split ring on the front, and I’ve tied direct and used a clip. My preference is to just take the split ring off and go with a clip, but I think that extra play is important. Tying direct noticeably deadens the action of the bait.

I’ve thrown it on two rods: an 8-foot cranking stick and a 7-3 topwater rod. Both work, but neither one really casts it a mile or very accurately. Because it doesn’t have a weight-transfer system and isn’t huge like a bigger swimbait, this bait is a bit challenging to cast accurately. It glides, and it doesn’t fly like a modern topwater plug does.

You might be able to fish it down a ways if you wanted to, but I found that this bait was really easy to retrieve a foot or so below the surface. I had my best experience with it while fishing the edge of a main-lake grass line, and I think that particular application is a really good one for the Speed Glide.

Overall, I like the Speed Glide a lot. I don’t think it’s going to turn into a staple of every tackle box, but if you fish around shad a lot, I think it’s worth owning one or two.

Buy it at Tackle Warehouse