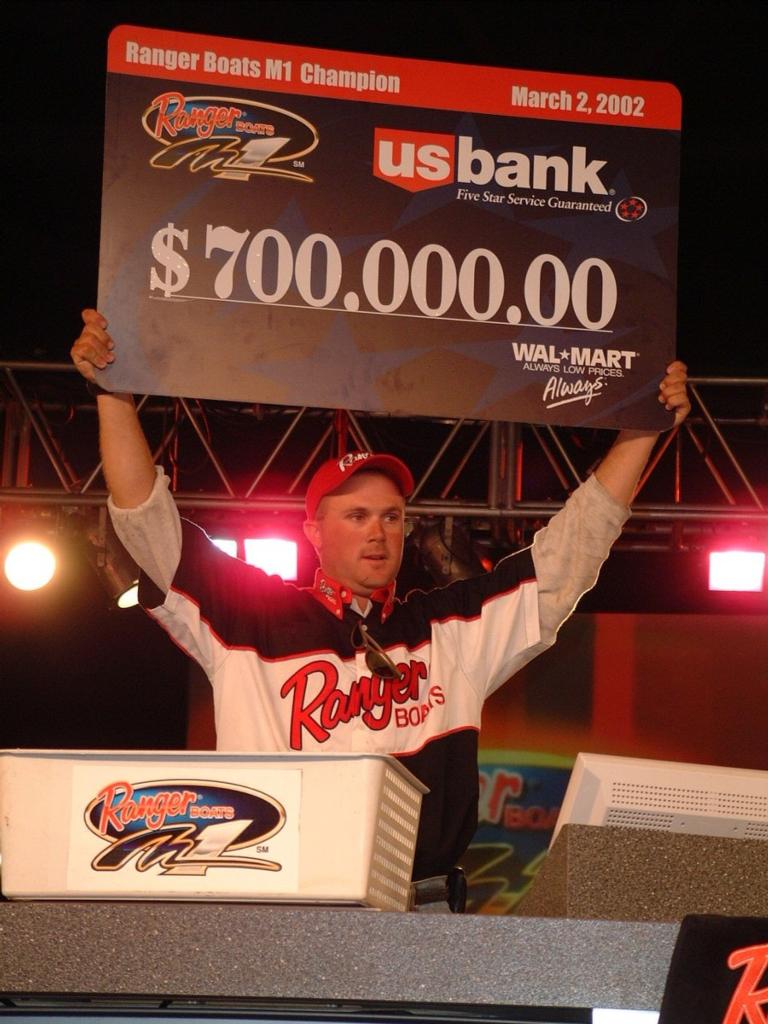 The cash machine … In four quick days, David Dudley has finally scored his first big-time victory, joined the million-dollar pro anglers’ club and rewritten the record books for the entire sport of bass fishing. The fishing machine from Manteo, N.C., already had an enviable tournament resume coming into the 2002 Ranger M1 with six FLW Tour top-10 finishes – including a $100,000 runner-up at the 2001 Forrest Wood Open – three EverStart Series top-10s and a fifth place at the first Ranger M1 in 1999. But victory had eluded Dudley – until today. To put it mildly, he picked a whopper of a tournament to win his first one. Not only did Dudley set the record for the largest cash prize ever won in a freshwater fishing tournament, his $700,000 in M1 winnings launched his total FLW Outdoors career earnings total to $1,007,100, putting him into the exclusive million-dollar pro angler club. Only one other angler, Darrel Robertson of Jay, Okla., has earned over a million dollars in his FLW Outdoors career. (Robertson, not coincidentally, won the 1999 M1 and cashed in $600,000.) Not only that, Dudley is just 26 years old. So what’s he going to do with all that cash? “I’m going to build a church with most of it, in Lynchburg, Va.,” he said. “Other than that, I don’t really know what’s in store for the future. I want to start a family with this money.”

The right perspective … Second-place Randy Blaukat of Lamar, Mo., fished his butt off this week and looked solid coming into the finals. In fact, he thought he would win today with his 14-pound stringer. “I really thought it was going to be enough,” said a frustrated Blaukat. “I fished a good, clean tournament and I didn’t lose any fish all week. Obviously, I just didn’t get the right bites to win today.” Blaukat – who fell short by just under 2 pounds – left his fishing hole 25 minutes early today to ensure that he returned on time, but he doesn’t regret the decision. His $110,000 second-place cash prize is nothing to sneeze at, and the cerebral pro angler rightfully looks at the near miss as a building block rather than a stumbling block. “When you finish as runner-up in any tournament, you’re fishing well,” he said. “Most of the time, these tournaments boil down to the real subtle things on the water, like leaving 25 minutes early. All you can do is stay mentally and physically focused and let it unfold. … If I’d have lost the tournament because I lost some fish, then I’d be much more disappointed.”

A gracious Rose … Hometown favorite Jason Kilpatrick had the tournament of his life – and had the Mobile Convention Center rocking with each bass he brought to the weigh-in scale. From nearby Satsuma, Ala., he was a crowd favorite throughout the later rounds. And he didn’t disappoint with his four bass weighing 8 pounds, 10 ounces that earned him third place. Appreciative of the hometown support, Kilpatrick was even more grateful for the actions of fellow competitor Mark Rose of Marion, Ark., today. Rose and Kilpatrick were fishing the same area, but when Rose saw Kilpatrick there first, he let the Alabaman have the water. While it is debatable whether the fourth-place Rose would have caught any more than his two bass weighing 2-5 if he had fished the spot, there’s no question about the generosity of the gesture in the heat of a million-dollar tournament. “I just want to say what a true champion Mark Rose is,” Kilpatrick said. “He could have come in on top of my water, but he didn’t.”

“Even if I would have thought about the money, I guess I couldn’t have done any worse than I did.”
– Eighth-place Dale Teaney, one of three pros to zero in the finals, commenting on the added pressure of fishing for a possible million dollars.