A cut above at the M1 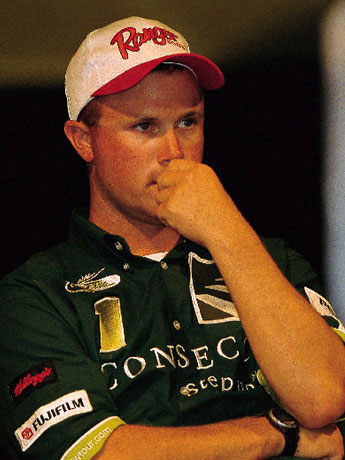 How David Dudley won the big fishing tournament – and $700,000 – with his chainsaw

On Sunday, Feb. 24, while practicing for the Ranger M1, David Dudley walked around the bank of a backwater pond on the Mobile River. Unbeknownst to him, $700,000 dollars worth of largemouth bass swam about in the small lake.

Dudley was walking the bank because the tiny creek that connected the backwater pond with the main river was completely impassable in a boat. Although the narrow creek was deep enough for a boat, huge downed trees criss-crossed the ditch from bank to bank. At some point a storm, or perhaps a tornado, had pushed six or seven trees down, ensnarling the length of the ditch with a horizontal forest.

When Dudley encountered the wooden barriers that Sunday, his curiosity festered. He wanted to know the origin of the blocked creek. At that point, he got out of his boat and began exploring on foot.

Initially, Dudley discounted the backwater. From shore, the lake looked ideal for bass, but it was nearly 90 miles from takeoff and the miniature forest that rested across the only entrance would take a logging crew to remove.

But after two more days of fruitless practice, visions of 4-pound bass began dancing in Dudley’s head. And in Dudley’s imagination, those bass lived in the impassable pond.

At daylight on Tuesday, the last day of practice, Dudley set out to do the unthinkable – cut his way into the small pond. Armed with a chainsaw, he began his long journey up the river.

Dudley spent the day wading in 50-degree water sawing and removing logs from the ditch. Then his progress came to a sudden halt.

That last major log that guarded the slough was the biggest. As Dudley sawed into the massive piece of timber, it pinched his saw and broke the chain. Fortunately, Dudley had a spare chain with him. But as he was repairing the saw, he dropped the flat blade (sometimes called the bar) into the creek.

“You might say my temper was running a bit hot by then,” admits Dudley, now that the adventure is over. “I was almost to the lake, and due to my own stupidity, I dropped the blade in the water. The only alternative was to swim for it.”

So Dudley, previously wet only from the waist down, now submerged himself into the chilling water to feel around on the bottom with his bare hands. “The water was pretty cold but I did not feel it. I guess because I was so mad,” he now laughs.

After an hour of searching, a thoroughly disgusted Dudley was unsuccessful in recovering the blade. Dudley knew he could still use a saw in the tournament, however, he would not be allowed to get out of his boat.

“So at that point, I just started moving logs with my bare hands. I knew I had to get the slough clear enough to do my final cutting from the boat. So I cleared the creek of smaller logs on both sides of the big log.”

So absorbed and exhausted from his efforts, Dudley nearly missed registration on Tuesday night. “I got to registration at 5:50, only ten minutes to spare,” he adds.

While most anglers prepared tackle on Tuesday night, Dudley repaired his chainsaw for the next day’s adventure.

On Wednesday morning, Dudley again made the 90-mile voyage to his untapped, yet still unproven, backwater pond. When he got to the giant log, he brandished his renewed chainsaw and revved it up for action.

“Now bear in mind, I am no Paul Bunyan. I don’t know much about cutting big logs,” says Dudley about what happened next. “The behemoth tree again pinched the blade and chain – permanently. The chainsaw was stuck, and I mean stuck solid. I thought I was mad the day before; this time smoke shot out of my ears.”

Dudley was forced into emergency chainsaw removal maneuvers. He unscrewed the motor portion of the saw from blade assembly and left the pinched chain and blade in the stubborn tree.

Qualifying with an overlooked pattern

Now that Dudley had wasted at least an hour of valuable fishing time on a failed plan, he needed a backup area. He ran back down to an easily accessible oxbow lake he had practiced in. He was not excited to find four boats already making the rounds on the primary stretches of cover.

Dudley managed to recompose himself and catch two 3-pound bass. But it was his co-angler that really tipped him off to an overlooked pattern. “My co-angler lost two big fish that day. While I was pitching the deeper bushes and trees, he would pitch up into about eight inches of water and wham – a big fish would bite. When I returned to a shallow twig where he had lost one earlier, I got a bite, too. Then it hit me, the fish were spawning and nobody in the oxbow realized it.”

Dudley’s new discovery temporarily relieved him from his role as a lumberjack. On day two Dudley mounted the scales with a catch of 15 pounds, 11 ounces from the backup oxbow pond.

According to Dudley, his competition in the lake was focused exclusively on the deeper bushes and laydowns. But two days of bright sun, calm water, and a full moon had the fish spawning in the shallower unfished pockets of the oxbow.

“I know it sounds crazy because the water temperature was in the low 50s but that is what the fish were doing – spawning. Several times I missed a fish and would come back a few minutes later and catch her. It was like blind sight-fishing.”

Dudley visited the oxbow again on the third day and managed 9 pounds, 11 ounces to qualify for the finals.

Going for all the chips

After qualifying, Dudley had a decision to make: stay in the oxbow or gamble on removing the obstinate log to fish somewhere that he knew nothing about. “One thing is for sure, I was not going to let that log whip me again,” says Dudley. “I went to Wal-Mart, and not only bought a new chain and blade for my old saw, but I brought a brand new Poulan chain saw. Now I had a backup if that log ate my saw again.”

When day four dawned at takeoff, Dudley noticed that the water was up higher than it had been. With that observation, he decided to lay it on the line and go for all the chips – wood chips, that is. 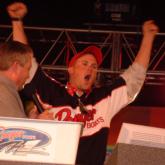 Now the M1 is history. Dudley finally won his battle with the big log by sawing his way into the untapped backwater. In doing so, he won the tournament.

The 4-pounders, which had danced in Dudley’s head earlier in the week, manifested into a catch of 15 pounds, 15 ounces, the heaviest stringer of the entire tournament.

Much could be said for Dudley’s raw determination, but in retrospect, Dudley says that not getting in the lake earlier in the week was a blessing in disguise. “It was not a very big place. If I had gotten in there on the first day, I might have fished it out over three days and had nothing left on day four. By keeping me out, that ol’ log did me a huge favor; it made me save the best spot for when it really counted.”