Secrets for lure selection and boat control on the Great Lakes 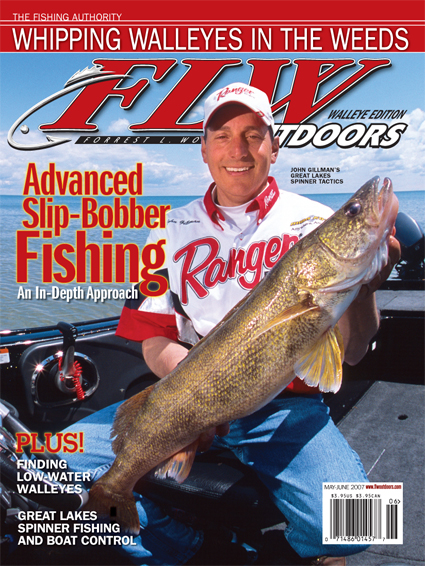 What looks like a Mardi Gras necklace, is really sharp and has a little vibration and flash mixed in? Why, only the deadliest walleye bait on the market right now – a spinner!

Spinners account for thousands of walleyes each year, particularly in the warmer-water periods. Walleye pro John Gillman of Freeland, Mich., would know, because he has dominated many Great Lakes tournaments with his snail’s-pace spinner presentations.

While fishermen debate every possible topic, we can all agree that more often than not, the difference between catching fish and just fishing is a subtle one. With that said, what makes Gillman such a phenomenal Great Lakes angler? Is it a secret spinner? A secret technique? After spending many days and hours talking about fishing with Gillman, I’ve learned the answer is simple. Gillman is a simple fisherman who knows what he does in intimate detail. His presentations are extremely effective the majority of the year on larger bodies of water.

Keeping it simple is one thing, but keeping an open mind is another. No matter what you are trying to catch, it is extremely important to utilize your experience while at the same time not getting stuck fishing memories. Gillman believes it is important to always fish throughout the water column. Typically, he starts with a four-board spread, staggering spinners 15, 20 and 25 feet down, and one near bottom.

Speed changes and boat-direction changes will dictate whether he needs to raise or lower the spread. While most fishermen have no hardened rules, Gillman usually moves three of his four rods to the depth that’s most recently been the most productive. What about the fourth? This line can be found dredging bottom, or very close to it. More often than not, Gillman feels the better walleyes are located on or near bottom. While the bottom doesn’t hold the largest concentration of fish, it does often hold the largest fish.

The caveat to this is that fish move so often in the column that this tactic is not something to employ from takeoff to weigh-in time. Often, the best caliber of fish are located in a very specific portion of the water column, even if you are getting bites from top to bottom. As the bite slows, it is often time to spread the lines back out and put out a “high rider.”

While most of us would not live and die with spinners running just a few feet down, it’s much easier to swallow once we have five nice ‘eyes in the boat. Letting the fish dictate what we do sounds simple, but it has made me, and many other anglers, look silly at one time or another.

A prime example of this happened to me this fall on a guide trip. We were hammering walleyes on the inside boards that ranged anywhere from 6 to 9 pounds. We caught enough to keep us busy for a few 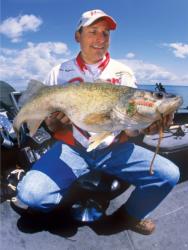 hours. When things slowed down, everyone wanted to know why I had kept the outside boards out with shallow-running lures. Not more than 15 minutes later, we hooked a fish that pushed 13 pounds. Did I get a little lucky? Perhaps. But it pays to keep your options open.

What exactly is Gillman using to get his spinners in front of those big-water walleyes? Typically, a bead-chain sinker is dangling from his trolling sticks. While he openly admits there are often times when he should alter tactics, he often sticks with his in-lines because of his intimate knowledge of them and knowing what and where they are at all times.

Another key element Gillman and many Great Lakes anglers have taken advantage of is customized spinners. While a majority of tournament anglers tie and assemble spinners to their discriminating tastes, more options are available now than ever.

I personally like the paint patterns of the new spinners by Silver Streak. These spinners look just like the ones I have labored to make in winters past. Silver Streak uses top-quality hooks and heavier fluorocarbon, which is the ticket for a lake, river or reservoir. These spinners are made of quality components that will please even the most discriminating angler. The custom-designed blades resemble many of the popular spoon colors that adorn nearly all of the charter captains’ rods. Gillman is a big fan of the beads, not only because of the reduced amount of line wear from them, but also the holographic finishes available on many of the models and the different color options they create.

Color seems to be playing more and more of a role on many bodies of water, likely due to the ever-increasing water quality. Gillman is probably as simple with his color choices as anyone I know, but different times on different bodies of water often presents a real day-in and day-out winner. In Gillman’s own words: “Yes, color matters, but I’m more concerned with getting the speed and depth right.”

The type of lure to use and the best manufacturers of them are well-known, but where should they be used? Most pro walleye anglers are big believers in good, quality electronics. The reason is simple; we 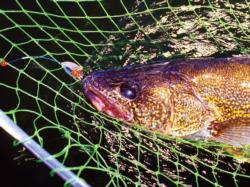 can run at speeds of nearly 30 mph and still mark fish with very high efficiency. This is extremely important for any fisherman because it allows you to cover much more water in a day. This is particularly true for Gillman, as he typically runs from .8 to 1.2 mph while pulling spinners. Unless you’re a lucky person, you might find it advantageous to cover many square miles of water in order to determine where the heaviest concentrations of fish and/or bait are located. This can be extremely helpful when fishing small or broken schools of fish.

We’ve discussed which lures to use and where to use them. Next is how to present them the most effective way. Mother Nature often makes it difficult to put the boat and/or lures where we would like them. Gillman relies on four engines on his boat. Is that overkill? Not when it comes to getting precision boat control in everything from glass-like conditions to 6-footers. A transom-mount electric engine bolted to the cavitation plate gives extreme precision when keeping lures in the .5- to 1.5-mph range. The key is not only in the quiet and incremental control, but also the centrally located position on the cavitation plate. At slow speeds in particular, gas engines have a tendency to “pull” the boat one way or the other. Steering from the main engine all but eliminates this pull. A trolling motor can be nearly as important as a GPS.

What happens when the inevitable walleye chop stirs? At this time, drift socks are an angler’s best friend. In moderate wave action, it’s common for Gillman to start out with one or two small to medium bags and increase them with either the building waves or decrease speed even more.

Not all tricks have to be difficult and expensive. Different weather situations call for different boat-control methods. If wave surge needs to be slowed down even more, it is common for Gillman to run the transom-mount electric in reverse. It’s this type of boat control that is considered to be most critical by pros such as Gillman, but generally overlooked by many anglers. Little tricks such as opening the walk-thru windshield, deploying the bowmount, and filling the bait and livewells all do a small part in slowing us down just a touch more. Each and every boat will handle differently, so experimentation is required. Chances are if these tips don’t allow you to slow down enough, you probably should not be on the lake in the first place.

In the rare event the weather is too calm, one trick Gillman pulls out of his bag is to pump his rods. This trick was employed to win the Linwood Classic on Saginaw Bay. Gillman and crew pumped the rods all day en route to victory. This tactic allowed him to out-produce his close friend, who was only a few hundred feet away, nearly three to one. It’s this man-made surge that will allow one to put a few in the boat on a pancake day.

The moral of the story is it takes many different elements to consistently catch fish. There are not many times we go out and catch fish on the same bait, in the same place, with the same presentation. Even the most beautiful spinner will not catch a fish where there are none. The most well-equipped boat won’t be as successful without the skills to control it under numerous conditions. It’s the little things that make a big difference.

You don’t have to force me to say pulling spinners at slow speeds has been the most consistent tactic on the Great Lakes over the last five years. But there is nothing that works all of the time, or the shelves at the local bait shop wouldn’t be so diverse.

When the bite is really good, or maybe when other tactics just aren’t getting it done, I like to pick it up a notch and pull crankbaits. While admittedly not as consistent, the change-up has accounted for some real hogs in my boat. Pulling my favorite Reef Runner Ripsticks in the top 10 feet of the water column accounts for some of the largest fish we take each spring and fall. These baits seem to out-produce most other baits, not because of their tooty-fruity colors, but because of their hunting action. Their action, which is more than just side to side, seems to provoke more and bigger strikes during these times of year.

I believe a key factor to using them in spring is when the water is just a little dirty – the time when spinner guys can see their props, but grumble with distaste. It’s at this time the baitfish move a little higher in the water column to find warmer water while at the same time camouflaging themselves from ole marble ‘eyes. This can be the perfect time to move a little faster, maybe 1 1/2 mph, which ups your odds by covering more water by the end of the day. This same scenario can be found in the fall as water temperatures cool down.