Yamaha pro adds another TVA win to his résumé 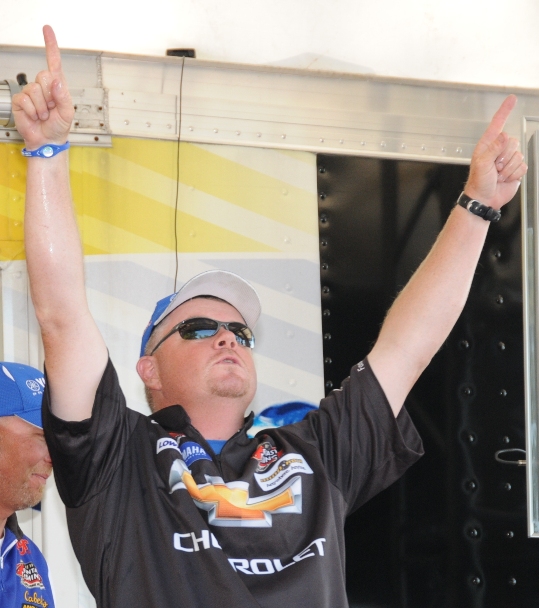 HIXSON, Tenn. – In NASCAR, some drivers are good at super speedways, others excel at short tracks, and a few are considered road course specialists.

In the same way, some bass pros shine on natural lakes, others find their element on smallmouth fisheries, and when it comes to TVA lakes, there is little doubt Mark Rose of Marion, Ark., is a force to be reckoned with, especially in the summer or fall.

In June, Rose finished second at the FLW Tour event on Lake Guntersville. Last year, he scored a fourth-place finish at Kentucky Lake. He also has two wins on Pickwick for an FLW Series in 2007 and an American Fishing Series Championship in 2009.

Now he adds a Lake Chickamauga FLW Series win to his resume as well.

Today Rose brought in 11 pounds, 8 ounces to hold off hard-charging local Wesley Strader for victory. For the books, Rose recorded a four-day total of 56-15 and collected $44,778 for his win. 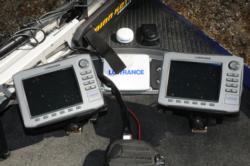 Much of Rose’s success on TVA lakes has come via his obsession with ledge fishing along the Tennessee River channel. Over the last three years, Rose had dedicated large amounts of fishing time to understanding the subtleties of bass behavior on TVA ledges.

“I love it,” said Rose of catching bass on offshore structure. “It’s a culmination of understanding so many subtle things: bottom composition, structure, current, fish position, bait, reading electronics, proper lure presentation. It’s like a giant combination lock – once you get the right combination dialed in, there’s no faster way to catch quality bass.”

His offshore efforts have been aided greatly by a new era of electronics that feature detailed contour mapping, super-sensitive sonar and side scanning capabilities. In Rose’s Ranger there are a total of five Lowrance depth finders including three in the bow and two in the console.

When he is fishing in the bow, he is monitoring three to four different screens at a time, which include a Navionics map, a Hot Spots map, sonar, Lowrance’s DownScan and StructureScan.

“At times I can see my lure on the screen and literally watch a bass come eat it,” Rose said.

Rose grew up as a shallow-water fisherman on the Mississippi, White and Arkansas rivers. His grandfather was a commercial fisherman, and Rose learned a lot about where fish position in current during fishing trips with his grandfather. These days Rose applies that same basic river fishing knowledge to an old Tennessee River channel that’s submerged some 15 to 30 feet deep. 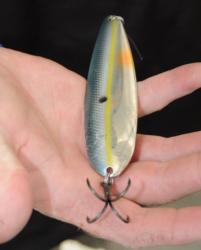 Though Rose relied on a bevy of ledge-fishing lures during the week, most of his damage was done on a Strike King Sexy Spoon (sexy shad color) tied to 20-pound-test Seaguar Invisx fluorocarbon line.

He fished the spoon on a Kistler Z-Bone Mark Rose spooning rod.

“I’d actually drag a Strike King ¾-ounce football jig until I got one fish to bite,” Rose said. “Catching a fish on the jig would get the school fired up, and then I could catch them one after another on the Sexy Spoon.”

Today he resorted to a crankbait on 10-pound-test Seaguar Invisx to catch his fish.

“As much as I’ve studied TVA impoundments, the one thing that always eludes me is the weekends, which is when most major tournaments end,” Rose revealed. “They just don’t run much current on the weekends, and it really makes things much tougher than during the week when they’re pumping water. If I could ever figure out how to catch them on Saturdays and Sundays on TVA lakes, then I might be a little closer to putting this whole ledge-fishing puzzle together.”

As for now, though, it looks like Rose is holding his own pretty well on TVA ledge fishing. 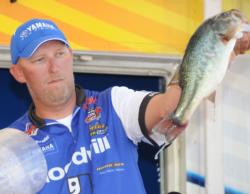 Despite a strong closing effort of 13 pounds, 3 ounces, Goodwill pro Wesley Strader of Spring City, Tenn., finished second with a four-day total of 54 pounds, 6 ounces worth $17,911.

He tied the ChatterBait to 15-pound-test Trilene 100% fluorocarbon and fished it on a Powell 733 rod with a Revo reel.

Strader used his home-lake advantage all week, targeting places he’s fished over the years where grass was most prominent in the past.

“My biggest key was fishing the outside clumps of grass that were barely visible,” Strader said. “I wear Typhoon sunglasses, which are the best at helping spot those dark clumps of grass under that TVA green water.” 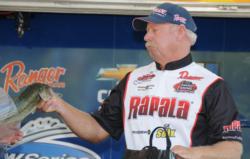 Mann’s strategy during the week was to find the deepest grass he could find on Chickamauga. Instead of fishing right on the hard grass lines in 6 to 8 feet, he backed way out and targeted isolated clumps down to as deep as 14 feet.

“I located a couple of river bends with deep clumps of grass exposed to the current,” Mann said. “Like on most TVA lakes, when the current was running past those deeper, scattered clumps of grass, the bite was best.” 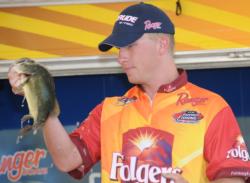 Andy Montgomery of Blacksburg, S.C., finished the event in fourth place with a four-day total of 52 pounds, 9 ounces.

Though Montgomery caught a few of his weigh fish during the week on a 1/2-ounce Shooter Lures buzzbait and a ChatterBait, his key lure for the week was Zoom Super Hog.

He rigged the green-pumpkin-blue Super Hog on a 1 1/2-ounce Bass Pro Shops tungsten weight on 70-pound Daiwa Samurai braided line and punched it through mats in 3 to 4 feet of water to catch his fish. 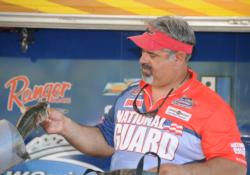 The first two days, Thliveros fished river grass with a Rapala DT-3 flat and DT-3 fat crankbaits. He tied them to 12-pound-test Suffix fluorocarbon line and purposely reeled the square-bill crankbaits into the grass and ripped them out for a reaction bite.

The last two days he resorted to a Zara Spook topwater and Zoom Speed Worm in watermelon and green-pumpkin colors. He weighted the Speed Worm with a 3/16-ounce Tru-Tungsten weight and slow-reeled it in the grass.

John Cox of Debary, Fla., won the FLW Series Angler of the Year award for the Eastern Division with a total of 755 points, beating fellow Floridian J.T. Kenney by a mere three points. 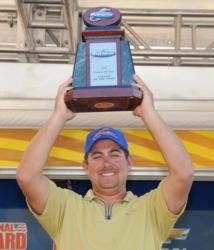 Cox finished second at the Okeechobee opener, seventh at Eufaula, and 22nd at Champlain.

He nearly gave away his AOY lead here this week at Chickamauga when he caught just one keeper on day one. But he battled his way back to 18th to take home the trophy, proving he can right the ship when needed.

“This feels good,” Cox said. “It gives me a lot of confidence to know I can compete outside of Florida. I’d love to fish the Tour next year, but I don’t really have the money to do it right now. Hopefully this will help with my sponsor search.”