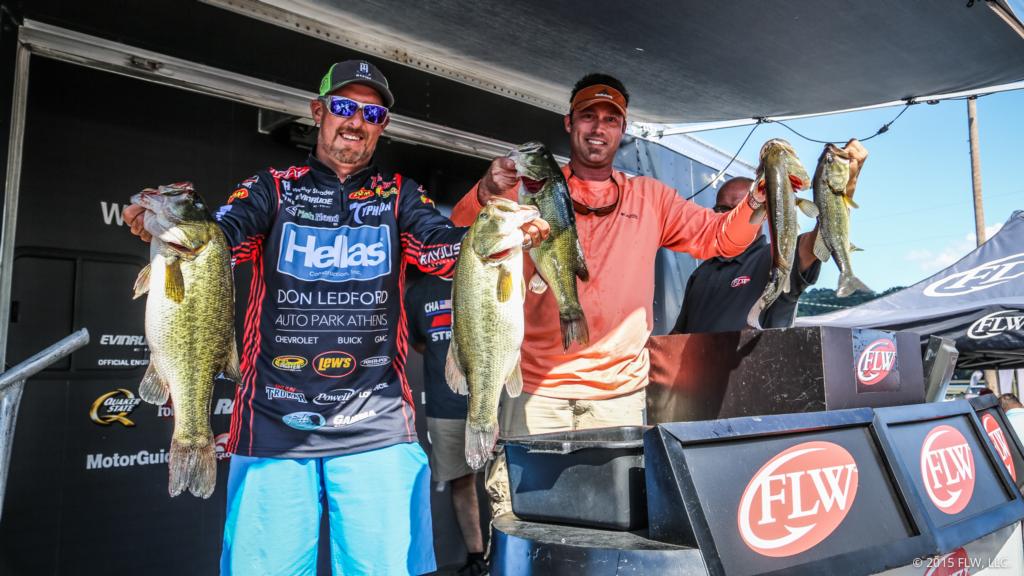 Wesley Strader and Cary Smith teamed up to catch the winning stringer. Like most of the other contenders, they flipped matted or scattered grass with soft plastics that were heavily weighted to punch through. Photo by Colin Moore. Angler: Wesley Strader.
September 12, 2015 • Colin Moore • Archives

Even Lake Chickamauga seemed to be in a giving Saturday as it served up its late-summer best for anglers in the NoogaStrong Memorial Bass Tournament out of Dayton. Though fishing on the Tennessee River chain typically enters the doldrums in early September, the winning stringer of 21 pounds, 1 ounce brought in by Walmart FLW Tour pro Wesley Strader and his partner, Cary Smith, proved it’s not set in stone.

Likewise, the big lake produced a 21-pound stringer for brothers James and Jared Patmor – the runners-up – and a 9-pound, 4-ounce big-bass winner for local angler Wes Hardin. Thirty-five limits were taken to the scale and more than a half-ton of bass were weighed.

Starting with the $2,500 Strader and Smith won, the charity event paid 45 places. At the awards presentation, however, Strader and Smith announced they were donating their winnings back for the families of the victims. Every other team that won cash followed suit. With that, the money raised by the event exceeded the goal established by organizers. The proceeds will be donated to the families of those murdered at a Chattanooga-area recruiting center in July.

“We passed our goal of $25,000, and that doesn’t include other monies raised through raffle drawings and donations,” says Tournament Director Shane Frazier of the Chattanooga Bass Association. “We also had 269 boats registered with 258 actually fishing, which is a record for an open boat tournament on this lake. Everyone who worked to make this event successful, including the anglers who participated, can be proud of themselves.”

Strader, who also donated the proceeds from the sale of autographed replica fishing jerseys like the one he wears in FLW tournaments to the event, spent the day flipping Zoom Z-Hawgs weighted with 1-ounce Reins tungsten weights into heavy grass. He and Smith culled several times.

Hardin caught the lunker of the tournament early in the morning on a Z-Man ChatterBait. The Patmor brothers fished Stanley Ribbit frogs – black and red early in the day and black and green later when the midday sun was overhead. Brandon Roop and Brent Tharpe, who placed third, fished a variety of soft plastics, frogs and jigs.

Walmart FLW Tour pros acquitted themselves well in the tournament, which drew a large crowd of spectators from as far away as Knoxville. Behind Strader, Jason Lambert – who was fishing as a co-angler with local stick Greg Lamb – wound up in fourth while Alex Davis and Bill Potting were sixth, Ramie Colson, Jr., and Joe Wilson were 18th and Forrest Wood Cup champion Brad Knight and his partner, Dusty White, were 21st.