A look inside Tom Monsoor's passion off the water 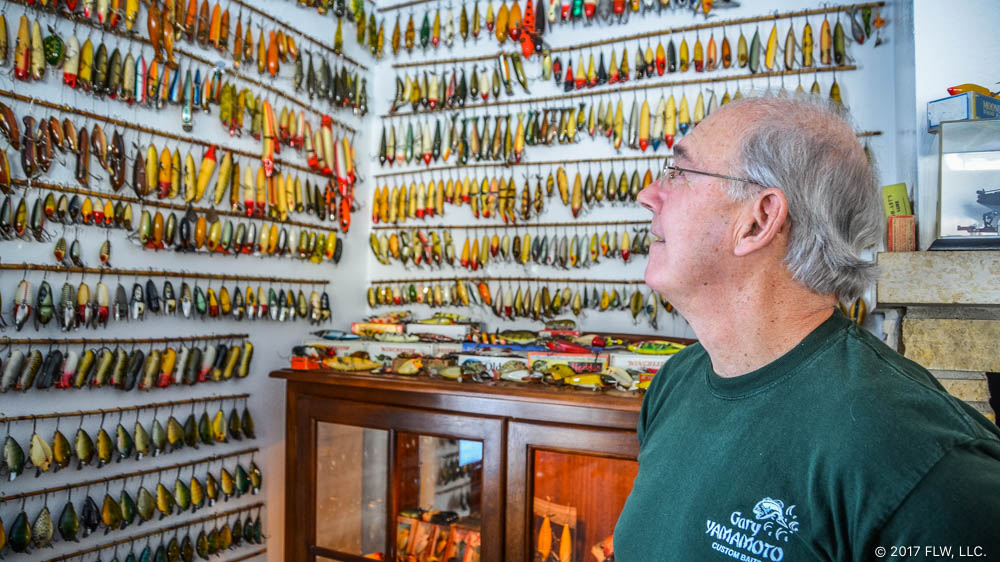 Tom Monsoor is known for his expertise with swimming a jig to catch bass. Regardless of how much money the swim jig has won the Wisconsin angler on the FLW Tour, however, it’s old fishing plugs that have captured Monsoor’s affections.

Monsoor is obsessed with antique lures and is always on the lookout for out-of-production models, the kind that make collectors like him salivate because of their rarity and age. Heddon, Creek Chub, Paw Paw, Moonlight, Winchester, South Bend, Pflueger – though Monsoor’s collection isn’t on the same scale as, say, that of famed collector Karl White, he’s managed to amass a fairly large assemblage of lures that date as far back as the turn of the 19th century.

Monsoor never had a hobby, other than fishing, that captivated him as much as collecting. He uses his kitchen table to make the jigs, spinnerbaits and buzzbaits he uses in tournaments, but the rest of his house is devoted to his lure collection. 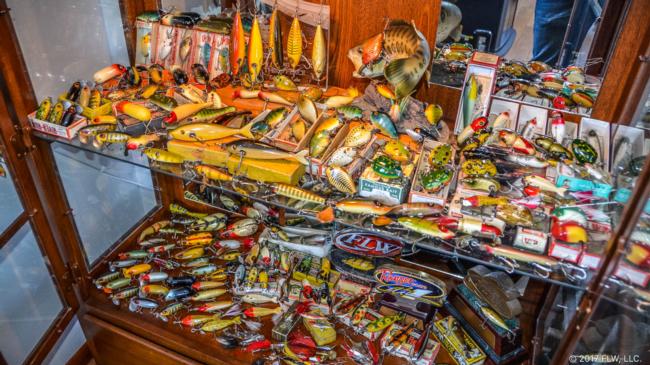 “You’ve got to be old to have a collection like the one I’ve got, or else young and rich,” says the 68-year-old Monsoor. “If there was a neat-looking lure made in the last 100 years, I’ve probably got at least one of it.”

Of course, “neat-looking” is in the eye of the beholder. To Monsoor, it means colorful and virtually pristine in finish and hardware. Not many lures beyond 10 years old meet that criteria, but the Wisconsin angler has managed to lasso hundreds of them here and there. 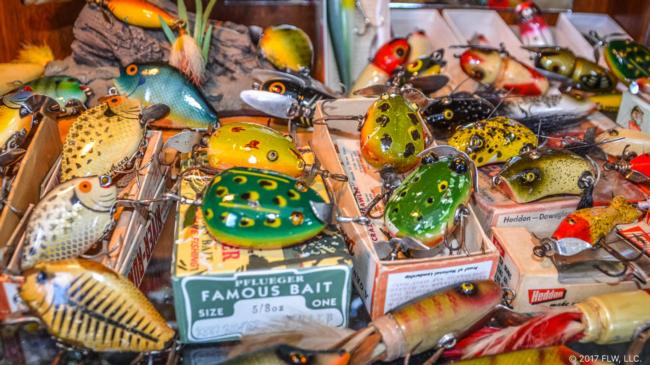 “I’ve got about 2,000 pieces of ‘the good stuff,’” notes Monsoor. “For instance, I’ve got 10 of the Pflueger Kent Frog, which is fairly rare and valuable. But I don’t necessarily collect a lure because it’s valuable so much as because it just looks cool. There’s some old stuff that’s worth a lot of money, but it’s so ugly I don’t know why anybody would want it. To me, the old lures and paint jobs represent a real art form, and I like to just look at them once in a while.”

Some collectors concentrate on one family of lures – usually Heddon – or perhaps on one of every color of a particular lure, but Monsoor isn’t so particular. He says one his favorite lures is also one of the least valuable in terms of collectibles: a Creek Chub Mouse. 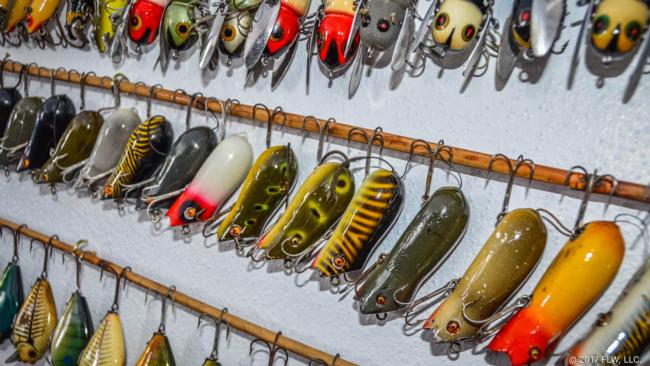 “I used the Mouse for years,” says Monsoor. “In fact, when I had the chance to buy 300 of the plastic version, I jumped on it. I still use the Mouse in the spring. It looks like a baby muskrat and the 3- to 6-pound bass up here will patrol the banks and just tear it up when they see one.”

On frigid winter days in the north country, Monsoor often wiles away the hours by inspecting his lures, wiping them off and rearranging them on the display shelves and cases that line some of his walls. Indeed, some rooms in his house resemble a tackle store, with all sorts of tackle filling the nooks and crannies. 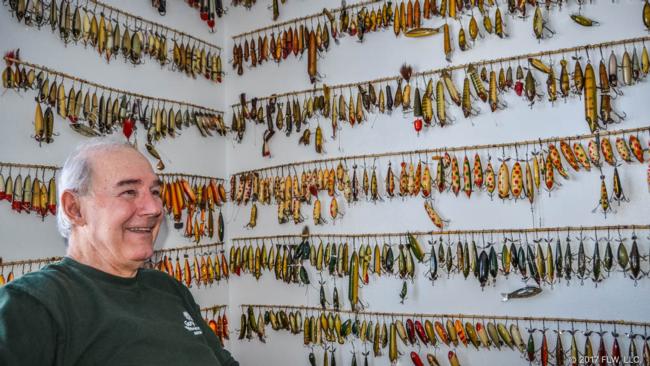 “I tend to arrange my lures by color on the shelves,” says Monsoor. “I’ve concentrated on strawberry spot, green scale, rainbow, shiner [he owns about 100 lures with this finish], three shades of perch and three shades of natural brown scale. When I collect a color, I get every lure in that color family I can find, regardless of brand, as long as they’re in nice shape, have glass eyes and weren’t mass-produced.”

Monsoor has some vintage lures that look as if they just came off a store shelf, with no visible blemishes or any signs that they had ever been wet. He has dozens of lures still with their original boxes, which enhances their value. In fact, some boxes are worth a few hundred dollars themselves.

“Having a really old and rare lure with its original box will add a couple of hundred dollars to its value – maybe more,” observes Monsoor. “I’ve got some old Heddon Dowagiac Minnow wooden boxes of the first generation that are worth about $1,000 themselves. The early Heddon ‘white boxes’ made of cardboard can still go for a few hundred dollars apiece, too.” 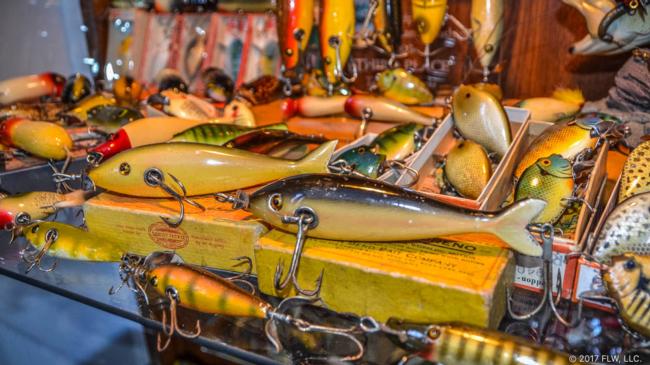 The rarest lure in Monsoor’s collection is a Heddon Black Sucker, which is worth several thousand dollars. The most Monsoor has paid for a lure is $6,500, that for a one-of-a-kind Heddon prototype that has a line tie on either end and can be used as a crankbait or a topwater lure. Monsoor bought it from a former president of the National Lure Collectors Club. Otherwise, he acquires lures on a random basis.

“Sometimes I find lures wherever we travel with the Tour, but usually not so much,” notes Monsoor. “A lot of collectors are like me – they want to collect; they don’t want to give up anything. A couple of years ago I read an article in Bass Fishing magazine about this guy who specialized in buying, painting and selling Smithwick Bojacks [popular out-of-production crankbaits] in Shreveport. So when we went down there to fish the Forrest Wood Cup on the Red River [in 2013], I stopped by his store to get a couple. Well, turns out he had a lure collection of several hundred pieces – really awesome stuff. But no way would he sell me anything. That’s the way it is when you collect: You don’t want to get rid of anything.”

A minimalist when it comes to his bait selections for tournaments, Monsoor owns many more lures that he doesn’t fish, than those he does fish. He can’t explain when and why he became so enamored with old lures that he decided to start collecting and displaying them.

Still, no explanation is really required: Lures are among angling’s sacred artifacts. We feel both awe and reverence in their presence. How could anyone not be fascinated, knowing that these pieces of colored wood and metal were fashioned in such a way by the hands of humans to fool fish into accepting them as living creatures? And to collectors such as Monsoor, this knowledge imbues lures with a life of their own.