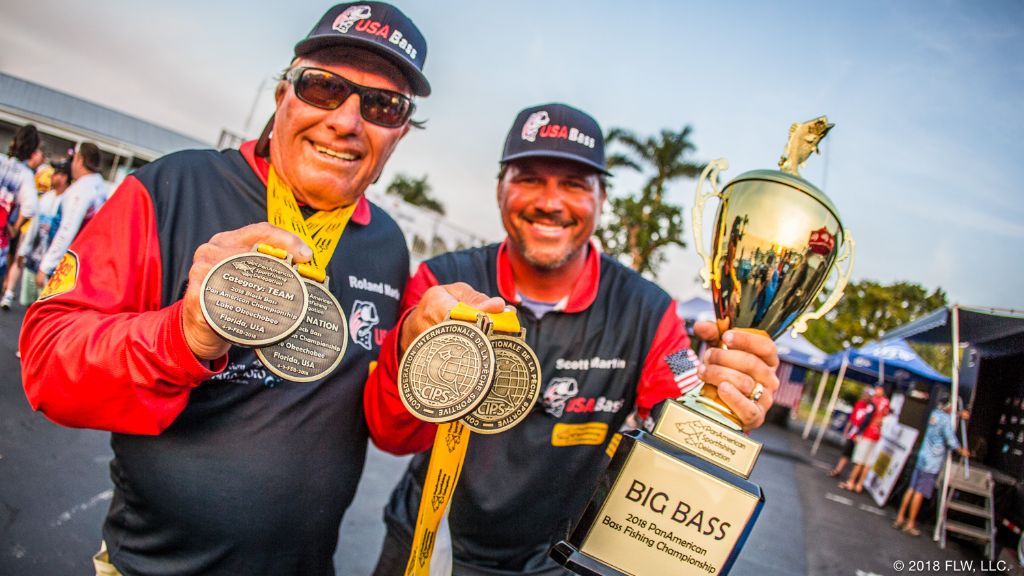 Roland Martin wasn’t happy about fishing with the flu, but his fatigue literally enlightened him and his son Scott Martin to a key detail that sparked an impressive come-from-behind victory with a two-day weight of 15.51 kg (34 pounds, 3 ounces) at the inaugural PanAm Black Bass Championship at Roland and Mary Ann Martin’s Marina & Resort on Lake Okeechobee.

After placing 10th on day one with a disappointing limit of 4.99 kg (11 pounds), the father/son duo roared back with a day-two limit of 10.52 kg (23-3) – the tournament’s biggest catch, which included a 7-pound, 3-ounce kicker that won the Big Bass trophy. The key, Roland says, was speed.

“You have to learn to be humble; we don’t always catch fish, and yesterday [Wednesday] was a good example,” says the nine-time Bassmaster Angler of the Year. “But we figured something out, and one of the main reasons we caught fish today was that I was extremely sick with the flu and I sat on the ice chest. I’d occasionally cast and reel it very slowly and hardly do anything. But the big fish liked that.”

After fishing the Monkey Box on the lake’s west side on day one, the Martins ran south to Kreamer Island on day two, but found the area uncooperative. With only two pound-and-a-half fish by 10 a.m., they returned to the Monkey Box area, fished the reeds and experienced a furious rally that transformed a dismal day into pure fireworks.

“We got into this one spot and, in one hour, we caught all those big fish,” Roland says.

Scott says their day-two productivity came from an area he had never fished until the FLW Tour event two weeks ago. With the spawn in full swing, the week’s warming trend triggered a shallow move, but these moody and sensitive fish require stealthy and strategic approach. Scott says he enjoyed promising practice results, but the Big O is known for its day-to-day changes.

“Yesterday we stayed in there pretty much all day, but we were fishing a little bit too fast,” says the 2011 Forrest Wood Cup champion, who also holds the FLW record for most Tour-level wins with eight. “When you’re on a spawn like we are right now, there’s a certain cycle when those females move up on those beds, and the first couple of days they’re very active, they’re very aggressive. As the spawn progresses, they get a little bit harder to catch.

“You have to change with the fish. If you’re doing the same thing you were doing three days ago, you’re not going to get bit. So, like dad says, we were on a flu pattern today. We had to throw out our baits and fish them very slow.” 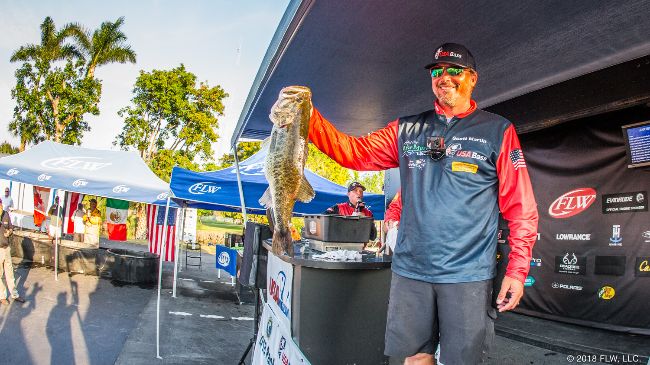 Scott says he and his dad caught their fish on Yamamoto Senkos and Yamamoto D Shads on 5/0 offset Trokar hooks. Switching from the braided line they had used in practice to 15- and 20-pound-test P-Line Tactical Fluorocarbon enhanced their stealthy effort. They threw the Senkos with 1/8-ounce bullet weights during calm conditions and went with the D Shad in windy conditions.

“When we went back to the area we fished yesterday, we really buckled down and slowed down,” Scott says. “It would take me a minute and a half to two minutes to work my worm in when I made a cast.

“Power-Poles were extremely important today. Even though there wasn’t much wind today, I would get in position, Power-Pole down and make deadly accurate casts. I’d work the bait and feel every little thing on the bottom. As long as I stayed with that, we started getting those bigger fish.”

Fishing the baits on 7-foot, medium-heavy rods, Scott compared their tactics to “old-school worm fishing.” Distance, he says, proved to be a critical detail.

“We’d throw into the cover and work our baits almost to the boat,” Scott says. “We caught several of our fish way away from the cover.”

Scott says that, while he and his dad didn’t find any preferences within the cover, the fish did seem to be picky about their depth. Most of their bites were in 3 1/2 feet.

“The fish want to spawn at a particular depth, most importantly, because if the wind blows a certain direction and muddies that area, it’s shallow enough that the sunlight can still penetrate through the muddy water.” 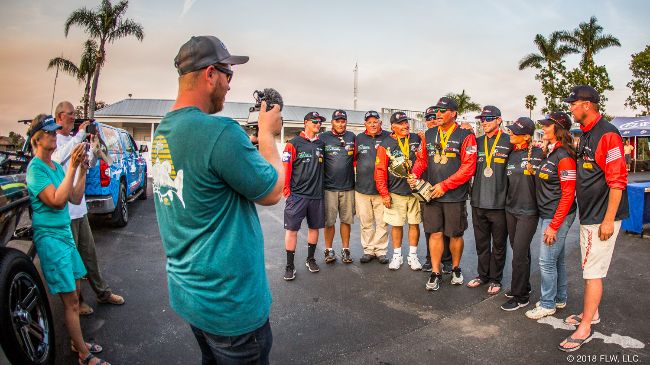 Notably, Costa Rica, which has no black bass fisheries within its borders, placed two teams in the top 10.

“Not having the bag we wanted to have yesterday and then coming back and winning gold is probably one of the more special moments in my career,” Scott says. “We want to see bass fishing become an Olympic sport, so we’re coming at it hard.” 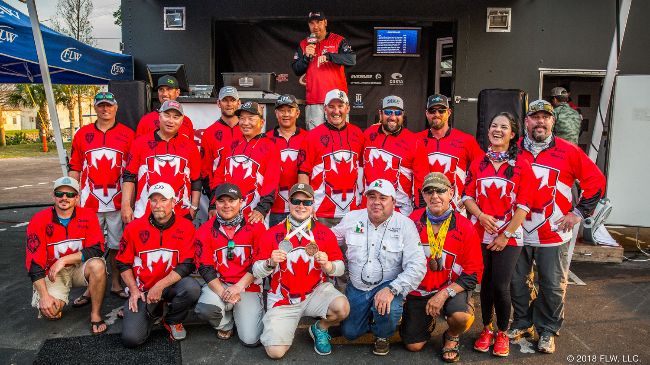