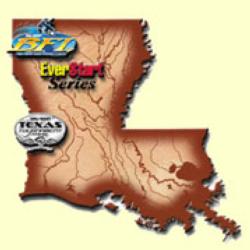 Cross Lake in northwest Louisiana will pose a unique challenge for Wal-Mart Bass Fishing League All-American qualifiers. That’s because the state governs the 8,600-acre impoundment with a protective 14- to 17-inch slot limit on largemouth bass, meaning only those fish under 14 inches and over 17 inches in length are eligible for weigh-in. All slot fish must be released immediately.

“Cross Lake has never been very attractive to tournaments because of its slot limit, so about the only traffic it gets is from locals,” said Joe Gates, a local angler who fishes the lake two to three times per week. “But it’s a very underrated fishery. The lake produces a lot of bass in the 3- to 5-pound range. But there are some real giants out there, too. It’s going to be real interesting to see what type of fish the BFL field pulls out of there.”

The anglers certainly won’t have to go very deep to find them.

Cross Lake bass live shallow year-round; they have to. The lake is only 15 feet deep at its deepest point and the average depth is 6 to 7 feet.

While anglers won’t have a lot of elbow room on the tiny reservoir, they’ll find plenty of targets to chunk at.

The lake’s north end contains dense stands of cypress trees along with a generous spattering of duck blinds used by hunters during fall and winter.

Boat docks are the dominant structure on the south end and west side. Anglers also will find some rocky points worth looking at on the lake’s southeast shore.

Baits and techniques? According to Gates, jigs, brush hogs and 10-inch worms pitched around the gnarly cypress root systems and duck blinds can be very productive, especially on cloudy days. He also recommends bumping the wood with a ¾-ounce spinner bait.

The fish have a tendency to relate more to docks in hot, sunny conditions. For best results, probe around the docks with crankbaits, spinner baits, tubes and finesse worms. There also could be a decent top-water bite on buzzbaits and Pop-Rs at first light.