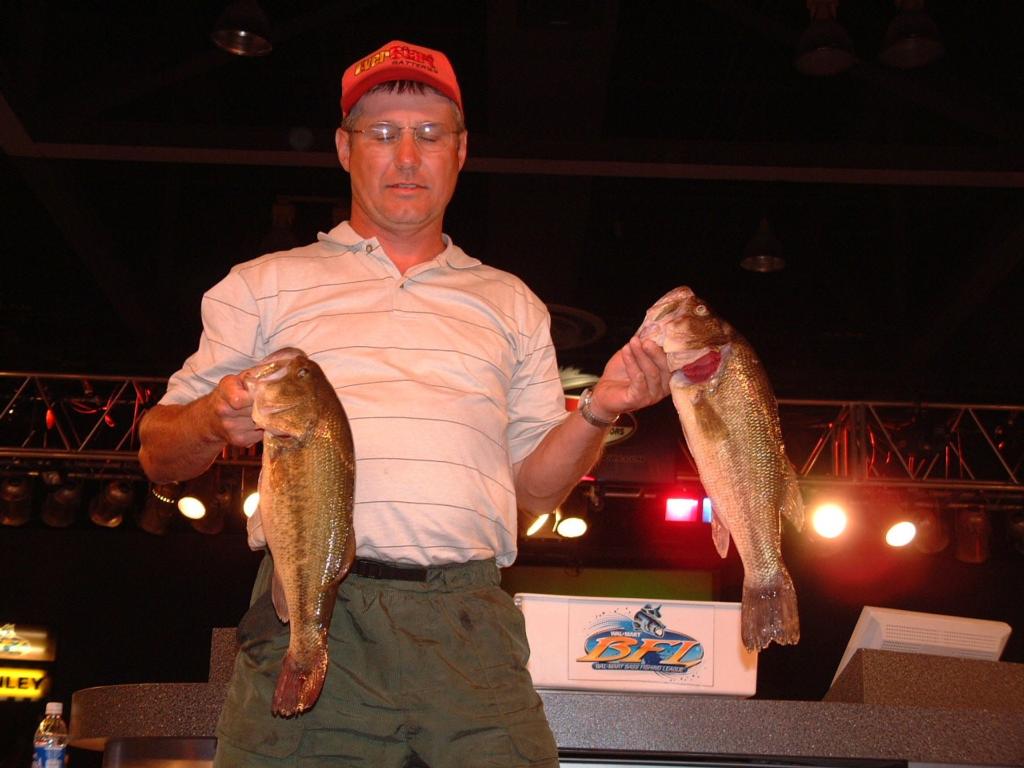 SHREVEPORT, La. – They don’t call it a slot “limit” for nothing. On day one of 2002 Wal-Mart Bass Fishing League All-American competition, anglers’ catch outputs were noticeably limited as only five competitors out of a total 100 boaters and co-anglers were able to muster a five-bass limit at Cross Lake. Much of the reason behind the relatively small sacks is the lake’s 14- to 17-inch slot limit.

One of the five limit-catchers, Dick Shaffer of Celina, Ohio, grabbed the lead in the Boater Division with a total weight of 14 pounds, 2 ounces. He led the division by more than 2 pounds over second-place Greg Gutierrez of Red Bluff, Calif., who weighed in five bass worth 12-0.

While many anglers professed to doing battle with the lake’s slot limit, Shaffer kind of inadvertently sneaked around the rule Thursday. He only had five bites all day, and every one of those fish was either above or below the limit.

“I call it getting lucky,” said Shaffer, a 43-year-old concrete contractor. “I feel pretty good about it, but I don’t know if I can duplicate it tomorrow.”

Shaffer caught his first bass, a 4-pounder, at about 8 a.m. and continued to fill out the rest of his stringer with sporadic bites throughout the day. He says he followed a scattered pattern, targeting docks as well as the popular Cross Lake cypress roots, using the same bait – which he preferred to remain nameless. Of his five fish, three were over the 17-inch minimum slot limit and two were under the 14-inch maximum.

Gutierrez used a scattered approach similar to Shaffer’s to work his way into second place.

“I told my wife before I came down here that I’m either going to go big or go home little,” Gutierrez said. “I found an area just like back home, and there’s not another boat in the area – yet. But I’m picking up bites all over the lake. I just need to be left alone with them is all.”

He also admitted that he wasn’t using his favorite California technique, the drop shot, to catch his fish. But he, too, was tight-lipped about what exactly he was doing.

“Just to tell a little would get people stepping on (the fish he’s catching) a little bit,” he said.

It was just this sort of random approach that seems in order here at Cross Lake this week. The lake-mandated slot limit says that anglers can keep no bass between the lengths of 14 and 17 inches long. That effectively knocks a lot of quality 2- and 3-pound bass out of contention as well as a lot of anglers who found themselves catching a majority of the average-sized fish.

“The slot limit makes it real challenging. It hurts when you have to throw back a 16-inch fish,” said boater Richard Bennett of Grass Valley, Calif. (Bennett, 19, and his brother Michael, 17, set the mark this week as the youngest All-American qualifiers on record. Richard placed 12th Wednesday with a two-bass catch weighing 4 pounds, 1 ounce.)

As another competitor, Cincinnati co-angler John Duwel, put it, “The slot monster did play a big part today.” He caught no keeper bass.

Monsters or not, it’s an even playing field and everybody has to deal with it. The slot limit might be messing with the minds of some of the weekend competitors fishing in their first big-time event, but other anglers pointed out that the fishing in general has cooled off on Cross Lake during the last two weeks. Many competitors reported getting few, if any, bites at all Thursday – much less a slot-limit fish.

“The fish have turned off right now,” said four-time All-American qualifier Allan Cagle of Winter Haven, Fla., who caught no keepers outside of the slot on day one. “Whether it’s the pressure or not, I don’t know. It’s a good lake with plenty of good fish, it’s just not showing itself.”

Illustrating the kind of bass available in the 8,600-acre impoundment, Cagle said he caught three bass heavier than 5 pounds in pre-fishing prior to tournament week. On Wednesday co-angler Gary Seachord of Beatrice, Neb., reported catching a 10-pound largemouth.

Eleventh-place boater Eddie Waits of Pine Bluff, Ark. – who weighed in a big-bass contender at 4 pounds, 5 ounces – said this about the slot limit: “It’s got everybody on an even keel. Nobody has an advantage or disadvantage. It will be the best who are going to show here.”

Smith placed third at the 2000 All-American and came into this week as one of the pre-tournament favorites. He said one of the biggest secrets to battling the slot limit and catching five keeper bass is to target smaller fish.

“Absolutely. Everybody has talked about the big fish, but they’re all on a post-spawn pattern and just aren’t responding as well,” he said. “I’m just fishing an area that holds smaller-sized fish. It’s a big flat with a bunch of shad.”

Keep your eye on Smith. He said he had an excellent pre-fishing session and seems very confident about his chances.

“I came here to win,” he said. “Because I finished third last time, I have a little more incentive, personally. If I make it Saturday, I’m going to let it all hang out.”

Jeremy Ives of Burgaw, N.C., took top honors in the Co-angler Division Thursday after notching a three-bass total of 6 pounds, 3 ounces. Like most of his compatriots, anglers who struggled to land just one keeper, Ives kept mum about how he caught them.

“I’m onto something that I’m not willing to reveal yet,” he said.

In second place for the co-anglers is Gary Fowler of Gordon, Ga., who notched a single largemouth weighing 4 pounds, 4 ounces by flipping at a dock.

“I knew there was going to be a low weight on the co-angler side,” he said. “I’m going to fish tomorrow, but it’s so iffy, you sure can lay an egg out there.”

A positive note about the low catch weights Thursday: everybody still has a chance to make the cut in the Boater Division and to win in the Co-angler Division Friday. From zero on up, it’s not going to take a lot of fish to make some serious headway in the rankings with a solid outing on day two.

On Friday boaters are vying to make the top-10 cut into Saturday’s final round and have a shot at the $100,000 top prize, while one co-angler will walk away with the $50,000 winner’s check following tomorrow’s action.