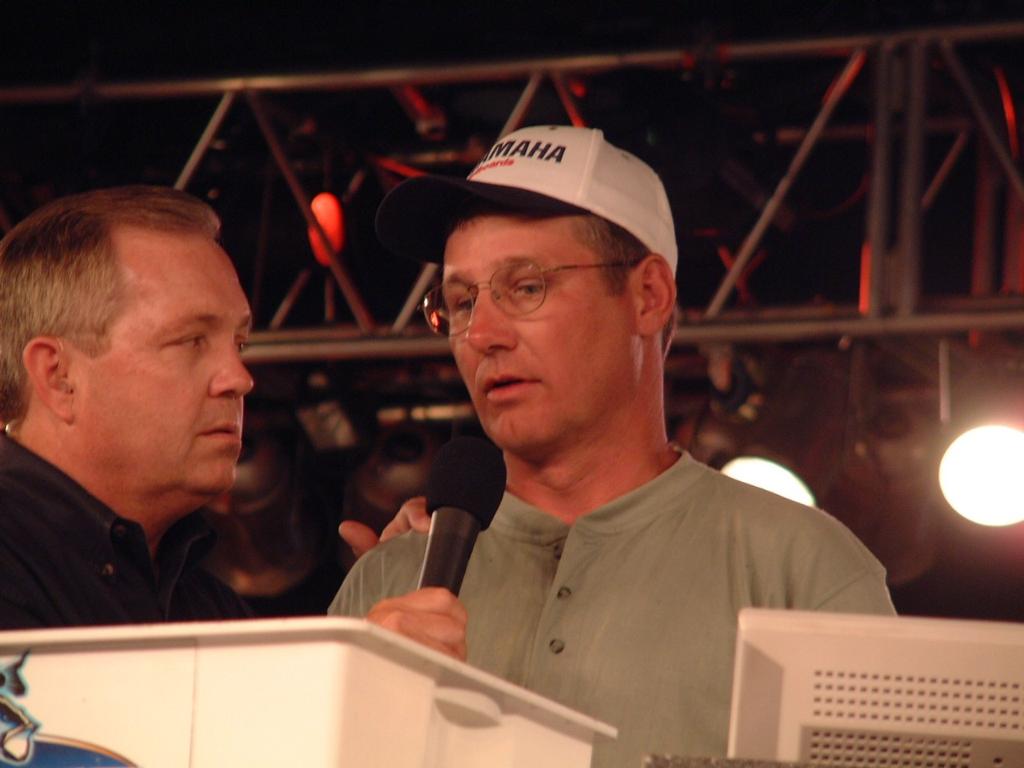 SHREVEPORT, La. – He didn’t catch much fish, but Dick Shaffer of Celina, Ohio, maintained a firm grip on first place in the Boater Division at the 2002 Wal-Mart Bass Fishing League All-American Friday. Buoyed by his standout catch of 14 pounds, 2 ounces Thursday, Shaffer added just another three bass weighing 2-15 to his two-day total Friday and held onto first place by virtue of his commanding opening-round combined weight of 17-1.

The next closest boater was Ricky Smith of Collinsville, Miss., who notched a two-day total of 13 pounds, 6 ounces. Following Shaffer and Smith were: Greg Gutierrez of Red Bluff, Calif., in third place with a two-day total of 12-15; Terry Tucker of Gadsden, Ala., in fourth with 11-10; and Steve Kennedy of Auburn, Ala., in fifth with 9-10.

“I caught three babies today,” said Shaffer. “I also lost one good fish, but I know where he’s at.”

It was another one of those days at Cross Lake, where any fish – from baby size to behemoth – was welcome. The 14- to 17-inch “slot monster” kept a lot of bass out of anglers’ livewells, even more so than Thursday, when only five five-bass limits came to the scale. On Friday only three anglers out of 100 managed to catch limits.

“The best part about today was listening to that aerator on that Ranger boat run,” said Allan Cagle of Winter Haven, Fla., who recovered from a zero on day one with a two-bass catch weighing 4 pounds, 6 ounces on day two.

Cagle was happy that he actually had to use the livewell today, as opposed to yesterday. The four-time All-American qualifier finished in 22nd place.

Shaffer, a concrete contractor by trade, is himself a repeat All-American. While he took pride in the idea that he led the opening round by a wide margin, he knows from experience that his work isn’t over.

Shaffer admitted that he laid off the bulk of his fish Friday and that he plans to return to his favorite spot tomorrow and try to repeat his day-one output. But – considering the lake’s stingy slot limit, fellow finalists who made a valiant run with some bigger weights Friday and the pressure of fishing for $100,000 – he knows it won’t be easy.

“I’m not even thinking about it,” he said. “I’ll just try to get fish to bite that are the right size. If I get five, I’ll be tickled.”

One of his biggest obstacles might be Smith, who seems to be reveling in this extremely tough-fishing tournament.

“I love to fish these tough-bite tournaments,” he said. “It’s not that I always catch them, but when the fish are easy there’s a lot of luck involved and it seems anybody can win. I can go out there, focus and watch the line for nine hours straight. I seem to be lucky enough to catch the fish that bite.”

Plus, Smith, a past third-place finisher at the All-American, is carrying some heavy experience into his second BFL championship final round.

“Absolutely. It’s different this year. I know what to expect in terms of how the tournament is run and so on. I haven’t had any other issues on my mind (besides fishing),” he said.

One of the bigger comeback stories of the day was Tucker, who caught Friday’s biggest stringer of five bass weighing 7 pounds, 13 ounces. He sat in 14th place after Thursday with a weight of 4-14. While the 3-pound difference might not seem like much, it was huge here this week.

“I’m fishing this lake like I would a pond,” he said about 8,600-acre Cross Lake. “Basically, I’m going after individual fish. I knew it was going to be a flipping lake, which is my kind of lake.”

The biggest comeback, however, belonged to Erie, Pennsylvania’s Dave Lefebre, who bounced all the way back from a 30th-place showing on day one to qualify for the finals in 10th place. He caught one of the other full five-bass stringers Friday, weighing 6 pounds, 15 ounces, to make up for a 1-pound, 2-ounce performance Thursday. It was the second-heaviest catch of the day.

Robert Ewick of Indianapolis won the boater big-bass award and $1,000 with the 4-pound, 6-ounce largemouth that he caught Thursday.

Another boater of note was 13th-place Wes Campbell of Dayton, Ohio. He collected a $10,000 check from Yamaha for being the highest-placing regular-season BFL points champion at the All-American. In fact, Campbell was the only points champion in the Boater Division to qualify for this year’s All-American. He won the Buckeye Division standings in 2001 with 1,089 points.

Competition resumes Saturday at 5:45 a.m. at the American Legion Boat Ramp as the final 10 boaters compete in a one-day shootout for the top prize of $100,000. The final weigh-in is at 2 p.m. at the L. Calhoun Allen Exposition Hall on Clyde Fant Parkway in Shreveport. Doors open to the public at noon. Admission is free, and fishing fans are invited to attend the weigh-in, which will be broadcast live as part of “FLW Outdoors” on PAX TV. There are also free children’s games, sponsor giveaways and a free drawing for a fully rigged Ranger 216 B Cherokee bass boat.