After a second-place finish at last year's All-American, Aaron McManaway takes the co-angler top prize on the Ohio River 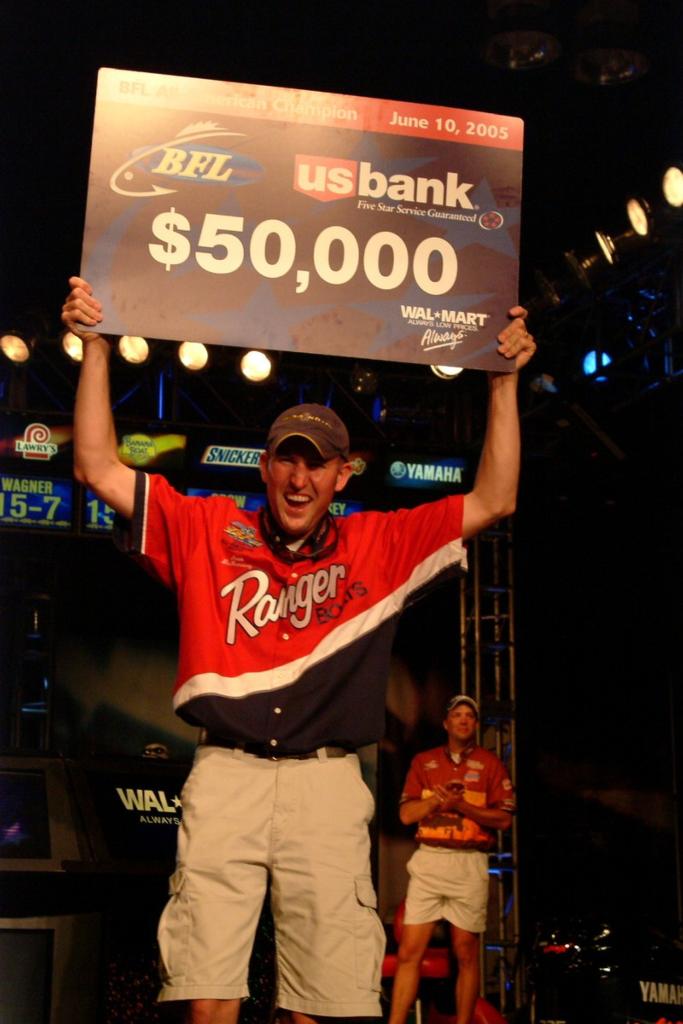 After all, he had a job to finish. At the 2004 All-American, McManaway, a seed salesman from Altamont, Ill., finished second in the Co-angler Division – a fine accomplishment for sure, but some competitors would rather finish dead last than second in a major tournament.

McManaway, though, is not the type to sit around and lick his wounds. No, the young angler decided to get to work. He noticed the Ohio River in Paducah, Ky., would be the setting of the 2005 show, and as such, he knew it would be a finesse tournament.

“I never, ever, ever fish spinning tackle, but I knew I was going to have to,” McManaway said. “I practiced that nonstop for a year.”

Practice makes perfect, and McManaway walked away $50,000 richer Friday as winner of the 2005 All-American with a two-day total of eight bass weighing 15 pounds, 4 ounces. Finishing second and first in consecutive All-Americans is a feat in itself, but McManaway pulled it off in only three seasons of BFL competition.

“These are only the first years I’ve fished the BFL,” McManaway said. “I made second last year on a strange lake I’d never fished, and this year it was on my home lake – two and a half hours from home.”

McManaway began his BFL career in 2003 in the Illini Division, and in three years, he has never ranked lower than 26th in year-end points standings. He finished fifth in the Columbus Pool regional to earn an All-American berth and cash in on his year’s worth of practice.

McManaway said he caught his tournament-winning bass on small tubes and finesse worms in green pumpkin with light line.

“That’s what I threw the whole tournament,” he said. “I caught them on crankbaits in practice, but I couldn’t get bit. I had a couple of friends show me how to fish the current.”

McManaway’s partners were not making long runs, opting instead to fish the Tennessee one day and Cumberland the next.

To take the win, McManaway, who weighed in fairly early, had to sit through what was surely an excruciatingly long weigh-in before finally being crowned the winner by a 10-ounce margin.

“I was a nervous wreck,” he said of those long minutes standing on stage. “I thought I had enough. It’ll set in here in about an hour.”

Now that he’s $50,000 richer, McManaway said he wanted to buy a new bass boat but, of course, would need to run that by his wife. “She would probably kill me,” he said.

Though the idea of fishing the Boater Division has crossed his mind, McManaway says he enjoys being a co-angler and would consider adding some more high-profile trails to his schedule.

“The fishing was really slow, and the bites were few and far between,” he said. “I fished a different style today – tubes and finesse worms, drifting in the current on the rocks.”

Morgan said that the river rose 5 feet after Wednesday night’s rainstorm, but fell back down before the anglers hit the water the next morning, wreaking havoc on several fishing holes.

“There were a lot of clouds, but a lot of sun, too, which made it tough,” he said.

Nevertheless, Morgan, who finished fourth in the Toledo Bend regional to advance to the All-American, fully realizes the impact of his accomplishment this week.

“It’s my first All-American, so second place isn’t too bad for your first one,” he said.

Jamie Floyd of Prairieville, La., entered the day as the No. 3 co-angler and retained that position with a two-day total of 12 pounds, 3 ounces that earned him $6,000.