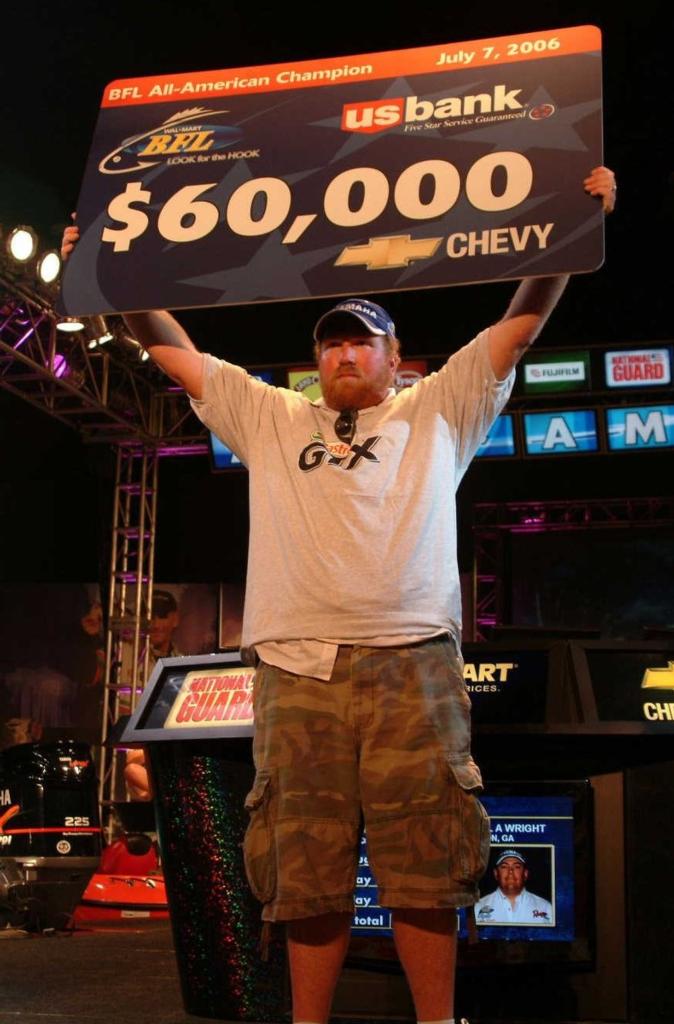 HARTFORD, Conn. – With a 14-pound, 4-ounce catch over two days, William Redmond wrote his own page in the history books as the 2006 Wal-Mart Bass Fishing League All-American co-angler champion. He defeated No. 2 Keith Smith by more than a pound and earned $60,000 cash as the winner.

That kind of payday is a far cry from his previous high of $1,781, which he earned last season as the winner of a Buckeye Division event on Lake Erie. The Sciotoville, Ohio, co-angler earned $50,000 as the All-American champ plus another $10,000 in contingency money.

“This is a dream come true,” said Redmond, who gave new meaning to the term nerves of steel as he calmly sat in the leader’s chair throughout the entire weigh-in. “This is something I’ve worked toward for a really long time.”

Only when the last competitor that could knock him out approached the stage did Redmond admit to some nerves. That’s because that competitor was day-one leader Michael Wright, whose day-two catch was obscured by his National Guard leader’s bag. Ultimately, Wright brought in only three fish and ended the tournament in third.

As for Redmond, he credited his boater partners, Todd Hollowell and Robert Soley, with his winning success. Hollowell finished the tournament in 31st, and Soley is still in contention in eighth place.

“I had two extremely good draws,” Redmond said. “They were both around fish.”

Redmond caught four bass on day one that weighed 6 pounds, 3 ounces, good for 11th place. He kicked it up a notch on day two, bringing in the only co-angler limit, which weighed 8 pounds, 1 ounce, the heaviest co-angler weight of the day.

“I was fishing the milfoil, and the fish were in it,” Redmond said of his winning strategy. “Anyplace there was a piece of wood in the grass – that helped. I was fishing a Senko, just pitching it in the holes. Sometimes you had to pitch it two or three times.”

And though he may have acted cool, calm and collected on stage, deep down, Redmond says he was nervous, largely because of a stumble on day one.

“I lost two fish yesterday,” he said. “I wouldn’t have had to sweat so hard if I hadn’t lost them.”

To get to the All-American, Redmond first ended 2005 as the No. 7 co-angler in Buckeye Division points standings. This allowed him to compete in the Lake Cherokee regional, where he finished third to advance to this week’s championship.

Smith stumbles but moves up to second

Yesterday’s No. 5 co-angler moved up the runner-up spot despite bringing in a two-bass catch that registered more than 2 pounds less than his day-one catch. Nevertheless, Keith Smith of Madison, Miss., earned $15,000 as the No. 2 co-angler with his two-day weight of 13 pounds, 3 ounces.

“We fished a different area, and I had to change my technique because of the high skies,” Smith said. “All I needed was one more fish – two would have put me over the hump. I just didn’t get the bites.”

Smith reported catching his bass on a frog in backwater areas and said the bright sunshine definitely did him in.

“With the sunny skies, the fish were hunkered down under structure,” he said. “You really had to put the bait over their heads to catch them.”

Even though victory was not in the cards for Smith, he still leaves Hartford a happy man -and a much richer man.

“I didn’t lose any fish,” he said. “I did my best, so I feel good about finishing high.”

Smith advanced to the All-American via the Lake Martin regional, where he finished fifth. He was the No. 5-ranked co-angler in 2005 Mississippi Division points standings. He made the All-American his first year to fish the BFL.

His ticket to success was a Zoom finesse worm, which he says he used to catch all of his bass. The trouble was not so much the bait or the weather but rather the area.

Wright was the No. 32-ranked co-angler in 2005 Bulldog Division points standings, which earned him a ticket to the Lake Toho regional, where he finished third to advance to the All-American, his first.

Bland, Stottlemyre round out top five

Finishing fourth and earning $6,000 is Robert Bland of Sheridan, Ark. Bland caught 6 pounds, 1 ounce on day one and followed that up today with another 6 pounds, 10 ounces for a two-day total of 12 pounds, 11 ounces.