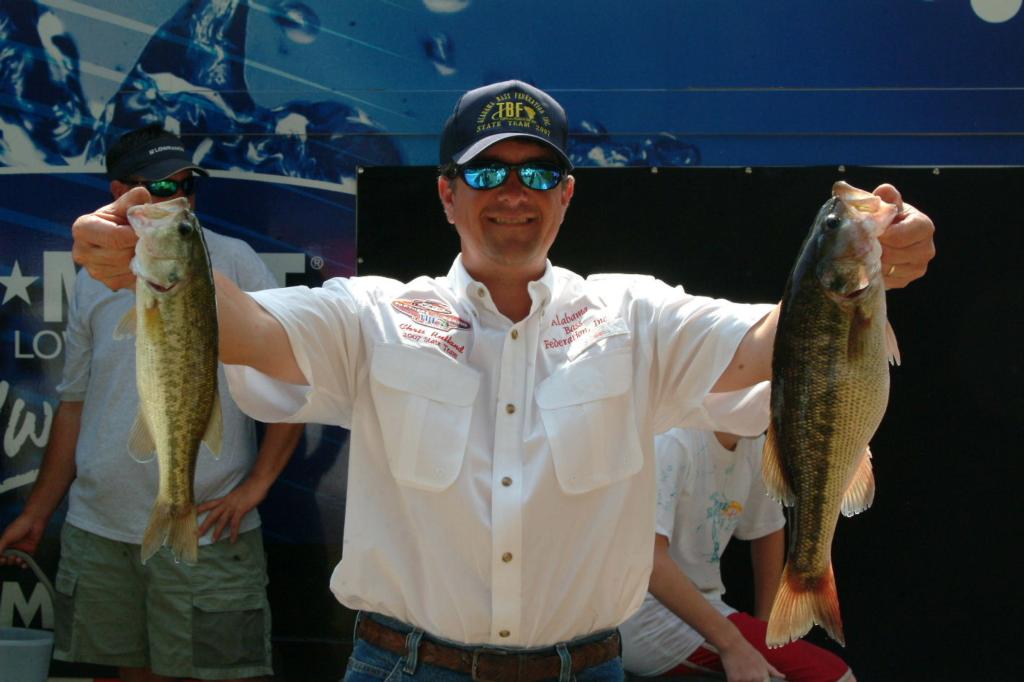 PRATTVILLE, Ala. – Day two of The Bass Federation Southern Divisional Championship on the Alabama River was eerily similar to day one, as numbers were very close in terms of total caught and overall weight as well as number of limits. Also like yesterday, the same boater, Chris Rutland of Wetumpka, Ala., continues to lead both the overall weight list and the Alabama state team.

Weigh-in spectators were also treated to a presidential visit of sorts, as Air Force One with President Bush onboard flew over the weigh-in site on its way from Huntsville to Mobile. As hot as it was, even Bush himself, an avid fishing fan, probably would have opted out of stopping here today.

The 84 competitors, though, gamely headed out into the Alabama heat in search of slots in the 2008 TBF National Championship, which are on the line this week. The top two finishers from each of the seven state teams will advance to the championship, and the states competing in this week’s Southern Divisional are Alabama, North Carolina, Tennessee, Florida, Kentucky, South Carolina and Georgia.

Cash awards at this event are given to the states themselves, based on the total weight caught by their respective 12-member teams. Currently, Alabama continues to lead that race with a two-day weight of 168 pounds, 2 ounces. That leads the North Carolina team’s cumulative weight of 149 pounds, 14 ounces.

Competition among the 12 Alabama team members remains fierce, as Rutland leads Greg Vinson of Wetumpka, Ala., for a second straight day. Rutland caught 12-5 yesterday to lead the Alabama pack and the overall field, but he saw his weight slip to 9 pounds, 1 ounce today. That brought his two-day total to 21 pounds, 6 ounces, enough to lead Vinson by 2 pounds, 11 ounces and the overall field by 2 pounds, 4 ounces.

Almost every angler interviewed said conditions were tougher today on the river, and Rutland – a man armed with extensive local knowledge – was no different.

“Today was a lot tougher,” he said. “I had a lot of competitors on places I wanted to fish, and I lost four really nice fish.”

“I think tomorrow I’m going to change up and run some new water,” he said. “I’m going to do the same thing, just in different water. I’m running out of fish.”

He may not be telling a fish story – Rutland claims he caught only five keepers today.

Keeping his North Carolina state lead but moving up one spot on the overall weight list to second is Brian Travis of Conover, N.C., with a two-day catch of 19 pounds, 2 ounces. Travis caught 9-15 yesterday and stayed consistent, bringing in a limit today that weighed 9 pounds, 3 ounces.

“I’ve been fortunate to have two good partners,” said Travis, competing this week as a boater. “That’s been key.”

While Travis and his day-two partner admittedly had a tough time getting fish in the boat, in some respects, today worked out a little better for him.

“Yesterday I couldn’t get a topwater bite,” he said. “This morning, I bet we had 40 topwater bites. I got on four schools of fish, though we only caught two of them. I bet we lost 25.”

Despite that, Travis adjusted and though his weight went down slightly, he did rise higher in the overall standings due to the tough day overall.

“After (the topwater pattern) quit, I started doing what I did yesterday – throwing a jig in the shade,” he said. “I’m looking for stuff I would fish at home. Even though it’s 90 degrees, I’m fishing pretty shallow – about 2 feet of water.”

Scott Hamrick of Denver, N.C., is Travis’ closest competition on the North Carolina state team, as he trails Travis by less than a pound with one day left to go. In fact, anglers from Alabama and North Carolina currently make up the top four competitors on the overall weight list.

Two Florida anglers have things all tied up on that state team, as both Ron Klys of Gainesville, Fla., and Jerry Shawver II of St. Augustine, Fla., have two-day weights totaling 17 pounds, 9 ounces.

Klys caught only 6-8 yesterday but busted one of the day’s larger stringers today, a limit weighing 11-1. Shawver is the more consistent of the pair, having brought in 8-10 yesterday and 8-15 today to put himself in contention.

Klys’ sack included a 4-pound, 6-ouncer that was just 1 ounce shy of the day’s big-bass award.

“I got a lot fewer bites,” Klys said of his day-two experience. “Yesterday I had an area; today I had to run and gun a pattern. My area ran out.”

Despite his heavy stringer, Klys said he struggled today. He was catching his bass on a Berkley Frenzy Diver.

“That’s been the key because my nonboaters have not been catching the same quality of fish,” he said of the bait. “The big fish I caught was first, and I struggled throughout the day.”

Shawver’s bag contained a solid 3-pound, 14-ouncer, and his success today is remarkable given the fact that it started with him splitting a log with his outboard at 70 mph.

“We were fortunate to get back, and I was fortunate to get two 4-pounders each day,” Shawver said. “Every day is a new day. Where I caught my fish yesterday, I got a few today, though I did go to new water. I bet tomorrow I’ll have to find another area.”

His day-one catch of 9 pounds, 5 ounces had him second behind Fredrychowski by only 5 ounces. Rikard caught four bass today weighing 7 pounds, 14 ounces to assume the throne in his state.

“It was tough, very tough,” Rikard said. “The water level dropped, and I noticed it about halfway down the river. I killed probably four or five hours for two small fish. I made a 45-minute run one way.”

After the dismal long run, Rikard then came back up the river and started flipping, a technique that gave him a 3-pounder off his nonboater partner’s spot.

“I’m a little nervous, but I drew a good partner from Alabama for tomorrow, so maybe he’ll help me out,” Rikard said of tomorrow’s final day. “I’m going to go home and dream about it.”

He reported catching bass on a mixed bag of baits today and said he was flipping everything from jigs to Texas rigs.

Robertson goes from third to first on Kentucky team

Yesterday’s No. 3 Kentuckian, Matt Robertson of Central City, Ky., now sits on top of his state team thanks to a day-two limit weighing 9 pounds, 11 ounces that brought his two-day total to 17 pounds, 1 ounce. That catch opened up a 3-pound, 7-ounce lead on his state team.

“It was rough at first,” Robertson said. “I lost three keepers right off the bat, but my partner taught me a few things about a bait, and it was on.”

Robertson is competing this week as a co-angler and had the good fortune today to go out on the water with North Carolina’s Hamrick, who caught 11-8 himself today. Robertson’s day-two stringer included a 4-pound kicker. He said the key to success this week is depth, or lack thereof.

“In this place, it’s fishing about as shallow as you can get,” he said.

Taking over the No. 1 spot on the Georgia team is Randy Cnota of Valdosta, Ga., with a day-two catch of 7 pounds, 5 ounces that brought his two-day total to 14 pounds, 12 ounces. That catch leads Randy Duncan of Columbus, Ga., by 1 pound, 3 ounces with one day of competition remaining.

“The treetops are just barely working,” Cnota said of how he caught his bass on day two. “They were smoking the first three days of practice.”

Cnota attributed the treetop pattern’s decline to the weather front that came through as well as the changing water levels.

“I can’t find the deep fish,” he said. “I’ve been searching all over the ledges, but I’m just not familiar with this place at all.”

Though he has a decent lead, Cnota described his chances of winning his state as “bleak.”

“It’s getting progressively harder to get fish out of the treetops,” he said, adding that he caught his fish today on finesse worms and a Paca Craw.

“It was slow at the beginning, but my partner was on a pattern that I have been on all week,” said Walters, who is competing this week as a co-angler. “We fished ledges today, and neither one of us got a bite until dinner.”

Walters said the main thing this week is current, and though he had the benefit of fishing with overall leader Rutland today, he’s hoping his good fortune extends tomorrow.

“I’m going to try my hardest tomorrow and try to stay in the lead,” he said.

TBF Southern Divisional qualifiers will head out again tomorrow for the final day of competition with a 5:30 a.m. takeoff from Cooters Pond, located at 1844 Cooters Pond Road in Prattville, Ala. Tomorrow’s weigh-in will also be held there beginning at 2:30 p.m.

Following tomorrow’s weigh-in, cash awards will be given to state teams in order of their finish, and the overall weight leader will earn a $500 Wal-Mart gift card as the Castrol Maximum Performer.